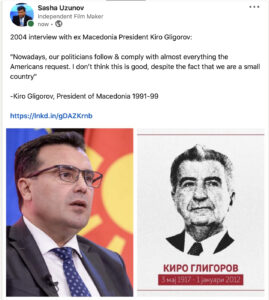 Left: Current Macedonian Prime Minister Zoran Zaev, installed by the US. Right: Macedonia’s President Kiro Gligorov from 1991-99 and the “founding father” of the Republic of Macedonia in September 1991

After centuries of foreign domination, Macedonians finally fulfilled their long cherished and hard fought for dream of independence when Macedonia voted to secede from the crumbling Yugoslavia on 8 September 1991.

Thirty years on, instead having a nation-state of their own, Macedonians have ended up in an odd political entity, with its name changed to North Macedonia in 2019, its “Macedonianess” erased. All to do with satisfying the strategic needs of one superpower, the United States. Truly Orwellian in scale – yes, I know the cliché has been worn out and should be rested but apt!

Without the need to go back to antiquity, which is largely irrelevant to the story. Macedonia had been under Turkish Ottoman Empire rule for nearly 500 years. In 1912-13 aftet the fall of the Ottomans in the Balkan Wars, Macedonia was partitioned amongst Serbia (later Yugoslavia), Greece and Bulgaria with Greece getting the largest piece. Albanian given some scraps in 1919. Macedonians were the victims of brutal assimialition. In 1944, the part that had been under Serb-Yugoslavist colonial rule was able to become a semi nation-state in Tito’s communist Yugoslavia. But Tito did not create the Macedonian nation, as it had already existed, though stateless. It is important to make this point in order counter Greek, Bulgar and Serb nationalist claims to the contrary.

A modern-day Macedonian nation-state is opposed by Greece and Bulgaria- two key US allies. Greece being a long-standing client dating back to the Greek Civil War (1946-49) and Bulgaria, a recent addition to the fold after the end of the Cold War. Macedonia being the weakest link, has been much easier for the US to strong arm into surrendering its sovereignty. Greece, to hide its role in oppressing ethnic Macedonians, blocked Macedonia’s recognition under its constitutional name, absurdly claiming that it had ownership of the name, and vetoed any attempt for Macedonia to join the European Union and the NATO military alliance.

After the collapse of Yugoslavia, Greece imposed an economic blockade on Macedonia to strangle it to death. As a direct consequence, the black market, smuggling in Macedonia became rife in order to surivive. This was also exploited by Serb strong man Slobodan Milosevic who was able to break UN sanctions imposed upon him for his role in the Yugoslav wars by using Macedonia as a conduit. Organised crime and mafias, corruption on an industrial scale  in Macedonia became entrenched because of Greece’s actions.

The hollowing out of Macedonia has been a calculated process, interrupted by the US wars in Iraq and Afghanistan. In 1995 a deal called the Interim Accord was struck between Greece and Macedonia – read US deal – in which Macedonia would use the temporary name of Former Yugoslav Republic of Macedonia (FYROM) – an insulting acronym – in the United Nations until such time that a settlement could be reached between Athens and Skopje and Macedonia’s then flag would be changed so as not to “offend” Greece.

In 2017 a so called Good-neighbourly deal with Bulgaria was signed by Macedonian Prime Minister Zoran Zaev and his Bulgar counterpart Boyko Borissov. Macedonia, under the agreement, would agree to put its history and identity up for negotiation with Bulgaria-in effect Bulgarian blackmail that Macedonians are really Bulgarians. In return Bulgaria would not block Macedonia’s entry into NATO and the EU.

In 2018 Prespa Agreement was signed between Greece and Macedonia: Macedonia would change its name to North Macedonia, give up parts of its history, identity, and deny the existence of an ethnic Macedonian minority in Greece in return for Greece not blocking Macedonia’s entry into NATO and the EU, which are US strategic interests not necessarily Macedonian ones. The Prespa Agreement had US fingerprints written all over it though Washington denied it. Much later US President elect Joe Biden would sign an Executive Order in 2021 placing anyone on the US blacklist for opposing the Prespa Agreement. Such a move is outrageous – a superpower criminalising Macedonians from wanting to keep their identity.

To do all of this, the US installed Prime Minister Zoran Zaev through a so called “Colour Revolution” in 2016 which brought down the decade long government of Prime Minister Nikola Gruevski, who later fled to Hungary to avoid prosection over a “corruption” scandal involving a dodgy car deal, a purchase of a luxuy limousine. Ironically enough, Zaev has to put use the vehicle! A number of opposition MPs were literally blackmailed by the Zaev government to support a vote in Macedonia’s parliament to change the constitution in 2018 to facilitate name change and the acceptance of the Prespa Agreement. A referendum – seeking to approve the Prespa Agreement – held in September 2018 was largely boycotted by Macedonians. But the Zaev government pushed ahead anyway, no doubt being pushed by the US.

In 1995 the Macedonian Foreign Minister, Stevo Crvenkovski, who signed the with Interim Accord with Greece, was found to be an informer for US intelligence, according to declassified CIA report on UN sanctions busting by Serbia at the time of the Yugoslav wars. The Macedonian Foreign Minister who signed the 2018 Prespa Agreement, Nikola Dimitrov, was revealed in a 2008 US diplomatic cable, as a protected source providing valuable informtioan to the US Embassy about Prime Minister Gruevski’s intentions not to to join NATO and  the EU.

During the 1990s Britain, one of Greece’s traditional allies, was deliberately stalling and sabotaging Macedonia’s recognition. Declassified Australian Foreign Affairs file reveals the UK Ambassador to the UN, Sir Jeremy Greenstock, telling his Australian colleagues of his deliberate delaying tactics in the UN Security Council.

To distract attention from Britiain’s spoiler tactics on behalf of Greece, later on both the UK government funded propaganda media ouitlets and private media began to portray Macedonians as “evil Slavs” colluding with Serbs to attack Albanains, even though Macedonia had seceded from Serb dominated Yugoslavia. Paradoxically and Ironically enough in 1993 UK Foreign Secretary Douglas Hurd even suggested to Macedonia’s President Kiro Gligorov to give up Macedonian independence and return to Serb-Yugoslavist rule once the war raging  in the then ex Yugoslavia died down. No doubt, Hurd was doing Greece’s bidding.

Macedonia’s President Kiro Gligorov was almost assassinated by a car bomb in 1995. He lost an eye in the attack. His death could have destabilised the newly independent state. The culprits were never found though circumstantial evidence points to a possible Greek intelligence operation.

In 1999 Macedonia, as a loyal supporter of the US, allowed NATO to use Macedonian territory as a staging post for the war in Kosovo against Serbia.

The crucial blow in the hollowing out of Macedonia came In early 2001 – before 9/11 in New York – the US unleashed a right wing Albanian Neo Nazi militia called the National Liberation Army (NLA), an offshoot of the Kosovo Liberation Army (KLA), which had fought the Serbs in Kosovo in 1999.

Initially the West condemned the terrorist attacks in Macedonia: 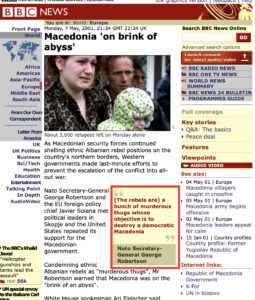 A BBC report  on 2001 war in Macedonia -quoted  ,” NATO Secretary General Lord Roberston  as saying “[Albanian rebels are] a bunch of murderous thugs whose objective is to destroy a democratic Macedonia

The Irish Times newspaper reported that high ranking EU mandarin Javier Solana told the Macedonian government not to negotiare with Albanian terrorists who started the 2001 war in Macedonia as it would be a mistake. 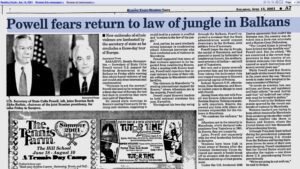 All of that changed within a short period of time, when it was soon realised by many that these “Albanian terrorists” were trained and equipped by the US. So the narrative changed, from terrorists seeking to create a Greater Albania, which would include a chunk of Western Macedonia-a Fascist Italian and Nazi German project put into practice in WWII- to civil rights activists wanting more “rights” for Albanians.

The leader of the NLA/KLA, in Macedonia, Ali Ahmeti and one of his lieutentants openly declared their motives for starting the 2001 war. It had nothing to do with rights. But more an extremist ideology which would include ethnic cleansing of Macedonians, emulating what Fascist Italy and Nazi Germany did in Macedonia during the Second World War occupation.

To cut a long story short, a Western brokered peace deal in June 2001 leading to what became known as the Ohrid Framework Agreement had Ahmeti lay down his weapons in return for a de facto federalisation of Macedonia, creating poackets of ethnic Albanian majorities in a kind of ethnic gerrymander. The purpose would be to establish Ahmeti as a key polticial player, king maker and a loyal US proxy who would serve Washington’s foreign policy agenda in Macedonia when needed such as having a block of votes in the Macedonian partliament at the US’s disposal.

Ahmeti soon created the DUI party, built on Albanian nationalist rhetoric. One of its leadership team members Nevzat Bejta post 2006 went as far as building statues to WWII Albanian Nazi collaborators in Macedonia, Xhem Hasa Gostivari and Aqif Krosi Recani. There has been deliberately silence from the West over these statues and Neo Nazi ideology which underpins them.

In 2004 a proposed referendum to oppose the territorial re-organising of Macedonia, that is creating the ethnic gerrymander coming out of the Ohrid Framework Agreement, was killed by the US dangling the carrot of recognising Macedonia under its constitutional name of Republic of Macedonia. But State Department documents reveal that it was a cynical and temporary ploy to thwart the referendum.

Now we come to the present day. Macedonia has joined NATO. The Prespa Agreement and the so called Goodneighourly Deal lowered enough Greek and Bulgarian opposition for Macedonia to join the military alliance but Bulgaria refuses to unblock Macedonia’s EU membership bid unless its demands-extortion-is not met.

Also there is a controversial census in Macedonia being held in a time of pandemic, Covid19. This the first head count to be held in over two decades. Trying to figure out how many Macedonians there are and what the percentage of ethnic Albanians are in Macedonia has been a controversial issue. Albanian nationalists claim the number is about 40% whilst others claim the figure is no more than 20%. The census will also count those living abroad holding Macedonian citizenship rather than just counting those who live in Macedonia on the day of the census. New citizenship laws have in effect made it easier to claim citizenship but in reality open to abuse. The concern being that the numbers of ethnic Albanians counted in the census will be deliberately inflated-if you include those living abroad and those who have just recently obtained citizenship- because they are US supporters. By having a “larger percentage” would give even more levers of power to the Albanian political factor in Macedonia. Macedonians in Australia have largely boycotted the census because of giving legitimacy to a rigged process.

The census is being seen by many Macedonians as the US, EU, UK and Germany’s final part in the hollowing out process of Macedonia and Macedonian identity: turning Macedonia into a state of “citizens” with no Macedonians.