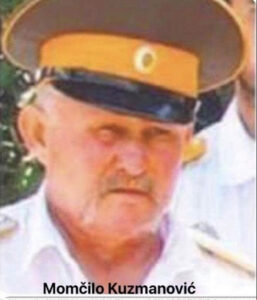 A newly declassified Australian Intelligence Security Organisation (ASIO) file obtained by Alternate Comms reveals that an infamous anti communist Serb nationalist in Australia Momcilo Kuzmanovic, with links to Bosnian Serb warlord Vojislav Seselj, was suspected of working for Yugoslav Communist intelligence service (SDB or UDBa) in the 1980s and involved in an assassination of a rival Serb nationalist leader in Sydney, Australia.

Kuzmanovic, now dead, was a member of an ultra right wing Serb nationalist monarchist group called the Chetniks, fiercely opposed to Yugoslav communist ruler Marshal Tito. Kuzmanovic, according to the declassified intelligence file, came to the notice of ASIO in the 1980s as a suspected UDBa or Yugoslavia Intelligence Service (YIS) informer.

In 1985 Radojko Djordjevic, a lay Serbian Orthodox Church official in Sydney’s west, was found murdered with three rounds (bullets) fired into his body – two to the head and one to  the chest, suggesting a methodical professional execution. In 2003 Kuzmanovic was charged with the murder but later acquitted.

The ASIO file reveals that NSW Police strongly believed the Djordjevic hit was the work of YIS and asked ASIO for assistance in solving the murder. 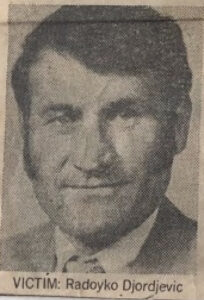 A source within Australia’s Serb community has told Alternate Comms that Kuzmanovic and another man Nikola Brkljac, now deceased, and a possible third man were involved in the murder.The source explained that there were a number of motives which converged in a temporary alliance of “enemies:: the need for Communist Yugoslavia to sow division within the Australian Serb nationalist community; one Serb nationalist faction getting rid of another, and a personal motive which for legal reasons cannot be mentioned.

Alternate Comms’ sister website TEAM UZUNOV revealed that in 1969 an Australian Croat Njegoslav “Yago” Despot was probably one of the the first assassinations performed on Australian soil by Yugoslav Intelligence. There is speculation that the figure is actually three, with Croat Pro Covic allegedly hit by UDBa in 1968.

Kuzmanovic first came to Alternate Comms’ attention in 2020 when after a five year wait, ASIO. released two volume intelligence file on Seselj – The Australian newspaper’s Jacqueline Magnay did a lengthy report on the Seselj file (see below). Kuzmanovic acted as Seselj’s go to man during Seselj’s visit to Australia in 1989. Kuzmanovic was mentioned as a suspect in the Djordjevic killing in January 1985 (mistakenly referred to as 1984). 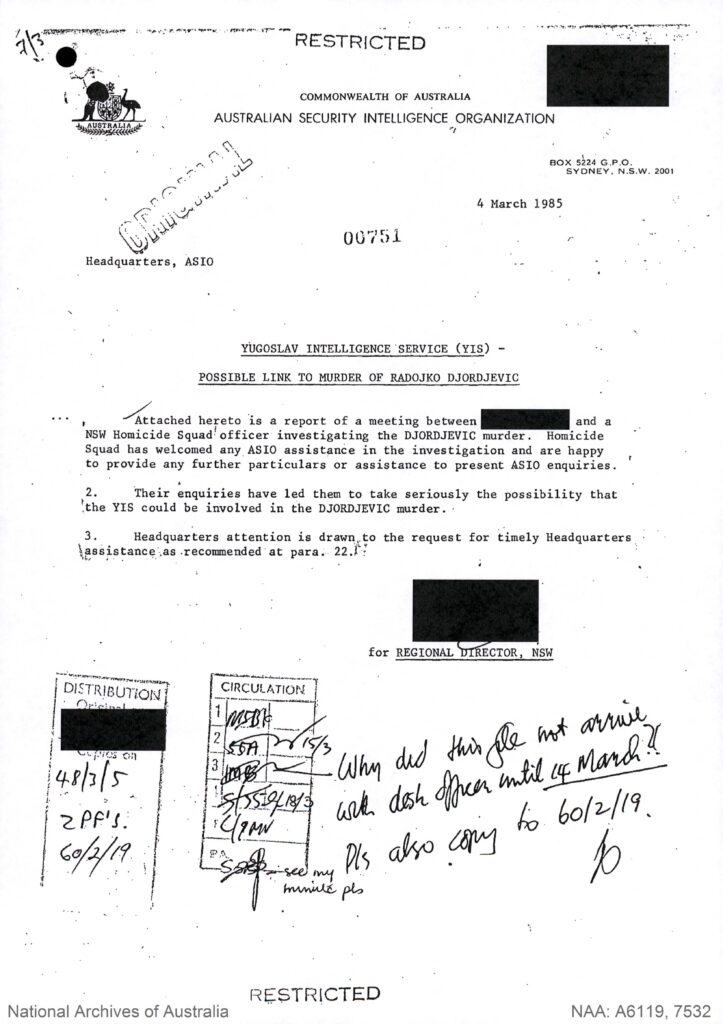 In 2020 after a five year wait, ASIO accepted Alternate Comms’s request to release its intelligence files on Vojislav Seselj’s visit to Australia in 1989. The Australian’s Jacquelin Magnay did a story on those ASIO files- Momcilo Kuzmanovic is mentioned in the Seselj ASIO file as a in the Djordjevic murder. 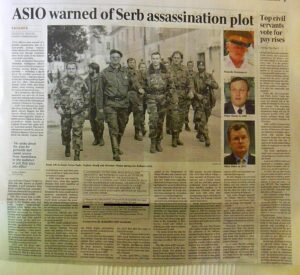 COLD CASE KILLING / COLD WAR KUZMANOVIC – was he working both sides of the street? Who protected him? Who was his guardian angel? So many questions, not enough answers

What’s intriguing and straight out of a Hollywood spy actioner is Australian Serb nationalist Momcilo Kuzmanovic, according to his ASIO declassified file , was suspected of working for the “wrong side” Communist Yugoslavia in the murder of anti communist Serb Orthodox Church official in Sydney, Radojko Djordjevic in January 1985. It remains an unsolved murder by New South Wales State Police Force in Federal Australia. 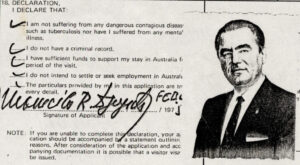 But Kuzmanovic’s political and spiritual mentor was his namesake the US based Momcilo Djujic, a WW2 Serb Nazi collaborator, Serb Orthodox Priest turned warrior, who after the war was smuggled out of the Balkans via the Vatican Ratlines, usually reserved for German, Austrian, Hungarian, Slovak, Croat Catholic collaborators, by the OSS, the forerunner of the CIA. The US official behind the project of using the Vatican in Rome and in other parts of Italy as  safe keeping places for ex Nazi quislings was James Jesus Angleton, who later rose to run the CIA’s counter-intelligence department. Djujic was put on the CIA payroll. 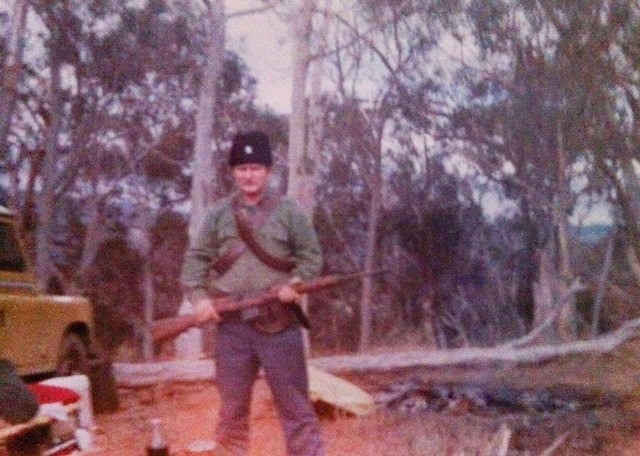 ASIO’s interest in Momcilo Kuzmanovic goes back to 1979. The ASIO file on him is heavily redacted. We do not know exactly what aroused its interest in Kuzmanovic but can extrapolated from what is declassified in his file that it had probably to do with links to Communist Yugoslav intelligence service (known as UDBa or SDB) which ASIO referred to as YIS or to Kuzmanovic’s links to US based Serb extremist and CIA asset Momcilo Djujic. Or even both. Interestingly enough ASIO makes no mention of the Kuzmanovic-Djujic connection. Was ASIO told by the US not to touch this particular area? We can only speculate with the bits and pieces of information available in the public domain.

KUZMANOVIC’S IDEOLOGY – Kuzmanovic belonged to an extremist right wing Serb nationalist and monarchist movement usually called Chetniks. Post WWII it set up shop in the US, courtesy of the CIA, and branched in Western Europe and out to far away Australia. The Chetniks believed in the violent overthrow of Tito’s Communist Yugoslavia and restore the pre war Serbian Kingdom of Yugoslavia, which denied the existence of Macedonians who had established a Macedonian republic in Communist Federal Yugoslavia.

Inter factional tensions and rivalries existed in the Chetnik movement worldwide. It is not out of the bounds of reality that Communist Yugoslavia might have temporarily sided with one faction to hit the other but in the end destroy both. The 1985 murder in Australia of Australian Serb Church official Radojko Djordjevic fits that scenario. YIS had infiltrated the Croatian nationalist movement here in Australia and internationally. Likewise it also infiltrated Macedonian and Albanian emigre groups as well.

Such a technique is called Provokatsiya, invented by Tsarist Russian intelligence service the Okhrana and later perfected by the Soviet secret police apparatus Cheka/NKVD/KGB. It involves using pretend or phoney dissidents.

Yugoslavia’s communist Tito had learned his communism post WWI at the feet of Soviet dictator Stalin and survived the 1930s purges within the international communist movement orchestrated by Stalin. In 1948, Tito split with his mentor Stalin as the Cold War developed between the Soviet Union and the West. Tito ended up as a kind of de facto US ally when it served his interests, other times he played the great balancing act between the USSR and US until his death in 1980. 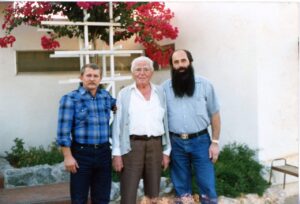 Momcilo Kuzmanovic (left), Momcilo Djujic (centre), Nikola Brkljac (right). Ultra Australian Serb nationalists pictured with Serb Chetnik leader worldwide, the US based Momcilo Djujic, a WWII Nazi collaborator who escaped to the US and went to work as a CIA intelligence assets. Date of photo unknown.

Kuzmanovic had weapons training. He had basic spy craft knowledge.