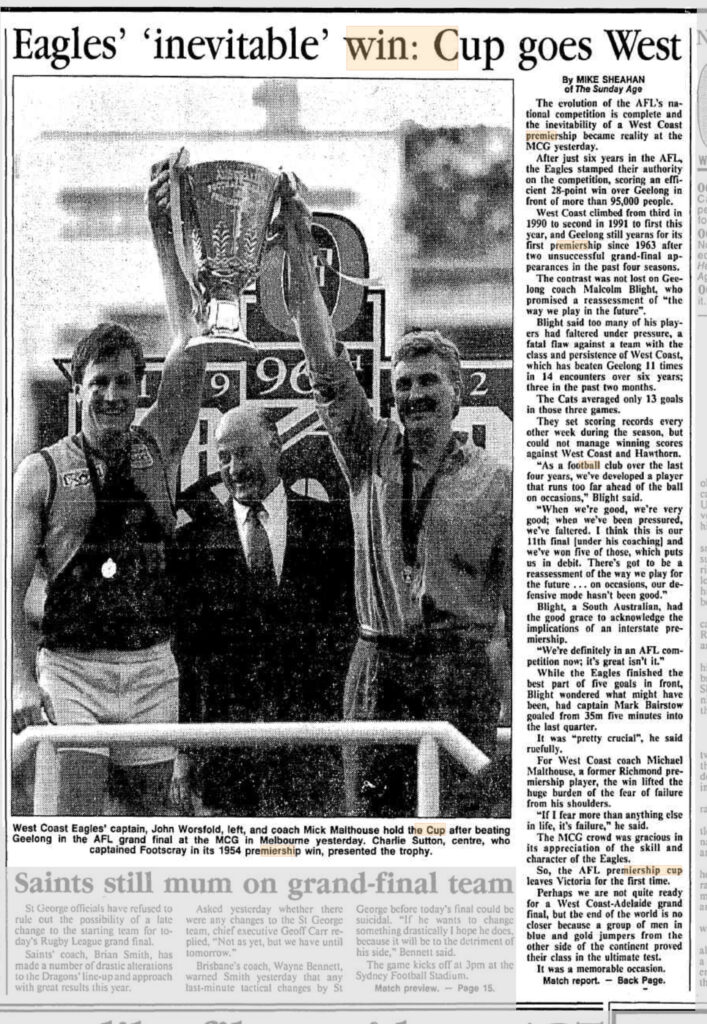 Thirty years ago in September 1992 West Coast Eagles became the first Australian Rules Football club founded by Australians ever to win the biggest prize at the top level, the Australian Football League Grand Final. Yet the AFL to this very day refuses to publicise such an historic event in Australian sport. In terms of culture, this is of national importance. And it took 96 years to occur!

In 1983 when the Royal Perth Yacht Club’s Australia II boat became the first Australian and foreign team to win America’s Cup after 132 years there were huge national celebrations. When the Eagles won the Grand Final in 1992 it was confined to a state celebration, that of Western Australia from which the club hails from. The man who founded West Coast Eagles, Richard Colless, in 1986 does not get the same credit as say John Bertram the skipper of Australia II.

The Commonwealth of Australia is a federation of six states: New South Wales, Queenslands, Victoria, South Australia, Western Australia and Tasmania. All six were individual British colonies which merged or federated to form Australia in 1901, which then became a self governing British colony or dominion. Australia became de jure independent of direct British rule in 1942 with the adoption of the British Parliament’s Statute of Westminster. Australian nationality or citizenship was only legally established in 1948. Prior to this Australians were classified as British Subjects who held British Nationality.

The Australian continent has been populated by indigenous people, who are also referred to as Aborigines, for over 60,000 years. British Colonial settlement began in 1788, which led to dispossessing large tracts of native lands, and generating conflict, war. between British colonial settlers and indigenous people, similar situation to what occurred in North America with white Americans dispossessing Native American (Indians) of their land.

The AFL was known as the Victorian Football League (VFL) until 1990. It was formed in 1896 in then British colony of Victoria as a breakaway competition from the original governing body the Victorian Football Association (VFA). The VFA was established in 1877 and survived for another 120 odd years before being absorbed by the AFL.

Suffice to say both VFL and VFA were founded by people who identified as culturally British in Australia. Modern histiography, AFL media spinners now calls these white people “Australians” even though the concept of a seperate Australian nationality stripped of its Britishness had not yet crystallised and hardened.

Many of the VFL clubs were founded by United Kingdom born Scotsmen, Englishmen, Ulstermen (British loyalists from Northern Ireland) and by Australian born Britishers. It goes without saying that “Australian” identity in 1896 is different to what it is now with its layers of multiculturalism and mass migration from various parts of the world, beginning in the post WWII years.

In 1899, barely three years into the VFL’s existence, its foundation Vice-President, WD Beazley, a London born Englishman, and speaking on behalf of the VFL commented that: “Australians were always ready to extend the heartiest greetings to visitors from England, which was the “home” of the Australians.”

Darren Arthur in an MA Thesis for Victoria University, Melbourne, Australia, points out “what is clear is that Protestant involvement and British ideology…played a key and intrinsic role in establishing the first football clubs of Footscray [working class industrial suburb of Melbourne].” Western Bulldogs, originally known as Footscray was founded in 1885 by a Scotsman called David Mitchell. Footscray started off in the VFA in 1886 and moved to the VFL (now AFL) in 1925.

In 1987 the VFL included two teams from outside Victoria into the competition, West Coast Eagles from Western Australia and Brisbane Bears (later Lions) from Queensland. In 1982 a Victorian club South Melbourne relocated to New South Wales, rebadging itself as the Sydney Swans. Sydney being the capital of NSW. In 1990 the VFL became the AFL.

So in effect, West Coast Eagles and Brisbane Bears were the first VFL/AFL clubs. founded by Australians. In 1992 West Coast Eagles is the first club founded by Australians to win the AFL (VFL) Grand Final ever. This is something the AFL does not want to admit because it would have to acknowledge that its founding fathers were British. It is understandable the AFL is sensitive about British colonialism and its impact upon indigenous Australians, hence the erasing of Britishness from its heritage.

But hypocritically the AFL deliberately associates itself and the game of Australian rules Football with another white colonial settler society, that of the United States, which has its own history of mistreating native, indigenous Americans (or Indians as they also known as). Moreover, the AFL has had a long standing relationship with US NFL (American Football/Grid Iron) for decades. NFL has a notorious history of racism towards native, indigenous Americans. It was only in 2020 that the NFL team Washington Redskins dropped the Redskins from its name, which native Americans found deeply offensive. The AFL, though publicly claiming to be supportive of indigenous Australians  is also paradoxically a platform for American nationalist agenda in Australia: promoting US heroes, culture, sports buzz words etc.

West Coast’s win in 1992 is portrayed by the AFL as being the first non Victorian or first interstate team to win the Premiership Cup.