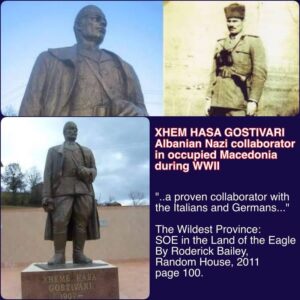 Some of us have watched and warned for years now that there is a frightening trend of- first  -Albanian Neo Nazism in Macedonia, that is the glorification of WWII Albanian Nazi collaborators and -now in recent times -Bulgarian Neo Nazism.

All of this has come about because of the West’s, namely the US, need for strategic reasons to pander, support, embolden right wing Albanian Neo Nazi extremists in Macedonia. In 2001 right wing Albanian Neo Nazi militia, a local franchise of the Kosovo Liberation Army, began a war in Macedonia to create a Greater Albania but then changed the narrative and presented itself as “human rights” fighters. Without going back over history, suffice to say these extremists were repackaged by the West as politicians such as Ali Ahmeti, who are useful proxies in supporting US foreign policy objectives in Macedonia at the expense of the Macedonia people for the benefit of long term US ally Greece.

After 2006, the first statue to WWII Albanian Nazi collaborator Xhem Hasa Gostivari was built by Nevzat Bejta, who took part in the 2001 war and later became a political lieutenant to Ali Ahmeti and his DUI party. In 2015 another statue to a WWII Albanian Nazi collaborator Aqif Krosi Recani was built by Bejta. The West remained deliberately silent – as it still does over these statues.

Fast forward to 2017 and 2018 with the signing of the so called Good neighbourly Deal with Bulgaria and the Prespa Agreement with Greece respectively, Macedonia was coerced by the US into giving up its history and identity to Bulgaria and changed its name to satisfy Greek extortion which had blocked Macedonia from joining the EU and NATO. Macedonia is now in NATO but is still blocked from joining the EU until Bulgaria’s blackmail, supported by the US, EU, and France in particular is accepted. What this amounts to is that Macedonia’s must give up their own identity and accept a Bulgarian one. This includes re-writing or more precisely white washing Bulgaria’s role in WWII as an ally of Nazi Germany and Fascist Italy, in which it took part in the deportation of Macedonia and Greece’s Jews to the Nazi deaths camps; and any reference to Bulgaria as a Fascist occupier of Macedonia is forbidden