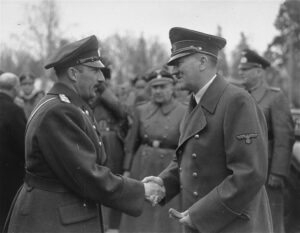 Adolf Hitler greets King Boris of Bulgaria on the occasion of the king’s visit to Germany. Photo: United States Holocaust Memorial Museum, courtesy of US National Archives and Records Administration

The Simon Wiesenthal Center in Jerusalem issued a statement supporting legislation sponsored late last week by Rashela Mizrachi, a member of the Macedonian Parliament, which would ban any cultural institutions which promote Nazism or fascism. The proposed bill is scheduled to be voted on in parliament.

The background to the proposed legislation is the recent establishment in Macedonia of two Bulgarian cultural centers, named for Bulgarian Nazi collaborators, one in Bitola this past April, named for Ivan “Vancho” Mihailov, and a second one this week in Ohrid, named for Bulgarian monarch King Boris III, both of whom supported Bulgaria’s alliance with Nazi Germany.

“Although Bulgarian Jewry was saved from deportation to Nazi death camps, thanks to the efforts of sympathetic Bulgarian officials and church leaders, such as Deputy Speaker of the Parliament Dimitri Peshev, and prominent clergy, such as Metropolitans Stefan and Cyril), the Bulgarians who annexed Macedonia, deported over 7,000 Jews, practically the entire Macedonian Jewish community to Treblinka, where every single Jewish deportee, including more than 2,000 children, were murdered. The current Bulgarian government, like many other former Communist regimes in Eastern Europe has rewritten the narrative of the Holocaust, to erase its active participation in Holocaust crimes, and has built these two so-called “cultural centers” to rewrite history and erase their crimes.”