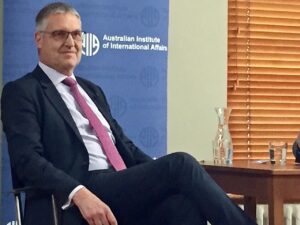 RUSSIA-UKRAINE WAR – No German troops for US force

Germany’s Ambassador to Australia Dr Marcus Ederer says no German troops will be part of a proposed US led intervention force in Ukraine, a plan floated by retired US Army General David Petraeus.

The German Ambassador Dr Ederer was addressing the Australian Institute of International Affairs – Victoria Branch, in Melbourne today. He discussed German’s foreign policy in relation to Australia, the Asia-Pacific region & the Russia-Ukraine War.

Germany has backed the Ukraine against Russia’s war that began when Moscow invaded in February 2022. Russia claims it intervened to protect the ethnic Russian minority in Eastern Ukraine persecuted by Ukrainian neo nazi extremists, and to keep the Ukraine out of NATO, which Moscow sees as a direct threat to its very security, existence. The Ukraine side says Russia’s war is simply an attempt to impose Russian dominance.

The New York Sun in late October 2022 reported that retired US Army General & ex US intelligence chief David Petraeus had said thatAmerican and allied forces may directly intervene in the ongoing Ukraine conflict against Russia even without a threat to any member of the US-led NATO military alliance.

So far the US has not sent a combat force into Ukraine, though it has advisors in country. The Ukraine Army has been largely trained by the US and NATO.

Critics of General Petraeus regard the plan as foolhardy and recommend the US stay out of the war and stop supplying the Ukraine with weapons; and have laid the blame at the feet of the US for the 2022 war for what they claim was a US/European Union “coup” in 2014 which removed pro Russian President of the Ukraine, Viktor Yanukovych, and replaced him with a pro Western one, Petro Petroshenko, with the objective to “destroy” Russia.

One such staunch critic is retired US Army Colonel Douglas MacGregor, also a supporter of Russian leader Vladimir Putin.

The German Ambassador to Australia, Dr Ederer, who served a stint in Russia as a diplomat,  said he had taken part in the Minsk I and II Agreements signed pre 2022 war, which sought to resolve tensions between Russia and Ukraine. He blamed Putin for the war and claimed Putin’s autocratic rule in Russia had crushed dissent of any kind and posed a very serious threat to the rest of Europe.