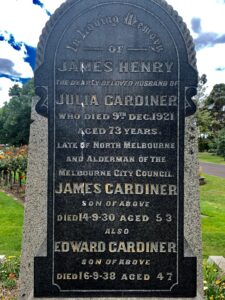 For many Australians, Football, the native Australian variety is more than a sport it is a religion. With that in mind, you would think that the pioneers of game would be loudly commemorated and celebrated. On a recent visit to Melbourne General Cemetery and Fawkner cemetery in Melbourne’s north, the graves of the founding fathers of two Australian Football League (AFL) clubs, Collingwood and North Melbourne, W.D. Beazley (see below for story) and J.H. Gardiner, both London born Englishmen, lie in disrepair and neglect. It would appear that not a soul has visited the final resting place of these two gentlemen for decades.

Ironically, Collingwood is one of the most iconic of Australian sporting institutions which celebrates its fierce loyalty and pride.

December 9, 2021 will be the centenary since the death of North Melbourne Football Club’s founding father J.H. Gardiner.

Gardiner, born in 1848 in Deptford in London emigrated to then British colony of Victoria, now the state of Victoria in the Commonwealth of Australia, with his family by 1851, eventually settling in the Melbourne local of North Melbourne. He became a local politician, reaching the position of Mayor of North Melbourne, a locality in Melbourne.

J.H. Gardiner in a 1909 Australian press story revealed how he identified: “…said he was another Errol-st. [main street in North Melbourne] boy, and he was a thorough Britisher. There was no skin deep about him, and he believed in the unity of the [British] Empire everytime…”

In that era Australian and British identities were synonymous unless you were an Irishman or woman and opposed to the British Crown. It goes without saying that modern day Australian identity has obviously gone through enormous changes since Gardiner’s’ day, losing its exclusively British feature and adopting an independent character. But we should not re-write history nor ignore the British identity of the many “Australian” pioneering Australian Rules Football administrators, officials, players and press pundits from that early era of the game.

North Melbourne club President Mr Ben Buckley was contacted and asked if his club would be commemorating Gardiner and in a symbolic multicultural gesture presenting UK High Commissioner Mrs Vicki Treadall with a North Melbourne jumper to acknowledge Gardiner’s English heritage. Collingwood some years ago in a symbolic gesture to advertise player Mason Cox’s American heritage presented the then US Ambassador to Australia, Arthur Culvahouse, with a Collingwood jumper. A North Melbourne Football club spokeswoman issued the following statement:

“Thanks for your email and reaching out. I will forward this onto some staff who may have further information. I will leave it with them to get back to you should they have any information or updates.”

So far North Melbourne haven’t got in touch with further details and the centenary of J.H. Gardiner is less than two weeks away.

1913 press story – North Melbourne honours J.H. Gardiner – for his long service to the club and securing Arden Street Oval. The report reveals Gardiner was one of the founding fathers of the club in 1869. 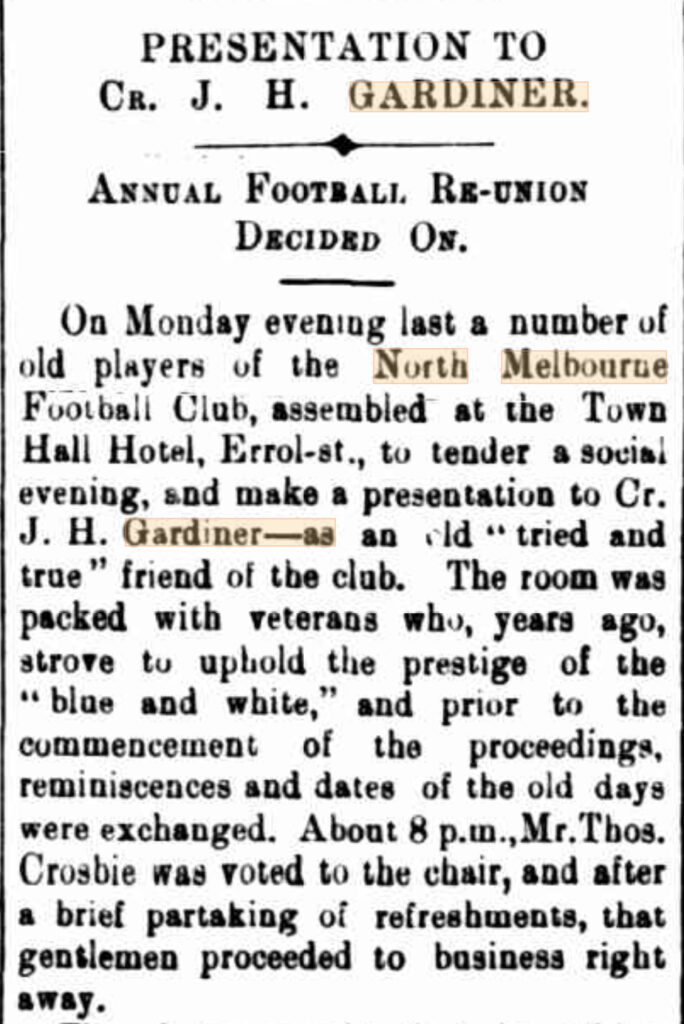 UPDATE: on the centenary of his death, 9 December 2021 I visited J.H. Gardiner’s grave at Fawkner Cemetery, in Melbourne’s north. I placed some flowers and a toy kangaroo in respect. I did not see any officials from The Australian Football League (AFL) nor North Melbourne Football club at the grave. 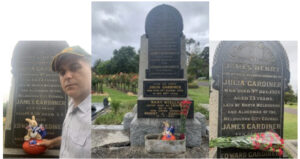 London born Englishman William David Beazley was one of the key founding fathers of iconic Australian rules Football club Collingwood (known as the Magpies) in 1892. He also served as the club’s first president from 1892 until his death in 1912. Some weeks ago, I tracked down his grave at the Melbourne General Cemetery and it is not in the best of conditions to put it diplomatically. 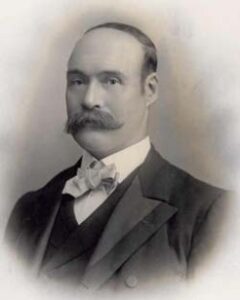 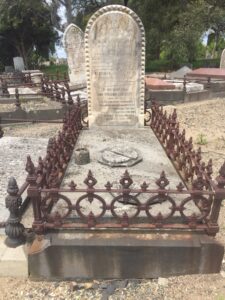 Beazley was a man of many parts. He arrived in the then British colony of Victoria (now state of Victoria in the Commonwealth of Australia) as a baby along with his parents. He began as a workingman, a saddler, who eventually became a very successful real estate agent and financial consultant. Beazley then branched out into the political arena by becoming Mayor of Collingwood, an inner Melbourne city locality which evolved into a working class industrial suburb. This then led to a foray into Victorian State politics as an MP and parliamentary speaker. He ended up aligned with the Australian Labor Party (ALP). The Collingwood Football Club official website regards Beazley as a very important figure in founding the club, especially using his political clout and influence. But leaves out his “Britishness.”

Beazley was actively involved in fundraising in 1900 for the British Empire’s colonial war in South Africa (second Anglo-Boer War 1899-1902) in which Australian soldiers fought in. Beazley was a staunch British loyalist.

The man who gave Collingwood the green light to join the VFA in 1892 was VFA official T.S. Marshall, a colourful Scotsman in his own right. He left his native Scotland to look for gold in New Zealand but ended up in Colonial Victoria, becoming involved in the early days of Australian rules Football. Marshall joined the Education Department as a bureaucrat, served as a Colonial Army officer, ran shooting clubs, was the Chief of the Country Fire Authority and a very staunch British Empire loyalist.

One of Collingwood’s first and very influential patrons and generous benefactors was Sir John Madden, the Victorian Chief Justice, Lieutenant Governor of the State, and also a staunch British Empire loyalist. Interesting enough he is interned at Melbourne General Cemetery and not too far away from W.D. Beazley’s final resting place! 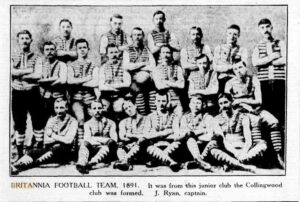 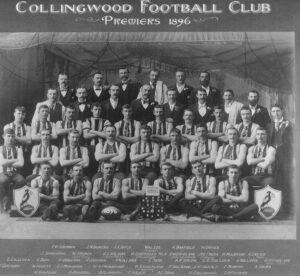 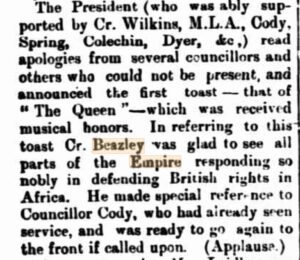 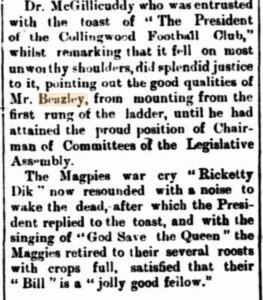 In 1900 over 2,000 people assembled at the Collingwood Town Hall for a Welcome Home parade for Australian soldiers from the South African War. W.D. Beazley as Collingwood Mayor and Victorian State MP addressed the enthusiastic crowd:

“The mayor (Cr, Beazley M.L.A.), on behalf of the citizens of Collingwood, welcomed the soldiers home. He said he felt it difficult to adequately express his feelings upon such an occasion. These men had gone’ forth with their lives in their hands to do their duty to their Queen and country. The ready response which they had made to the call of duty had proved to the world at large the oneness of the empire. (Cheers.)

“They had shown themselves brave and true Britons, deserving of all honor. (Loud applause.) The action of the Australian troops in going out to assist in England’s wars had done a great deal to build up a United Australia…”

In that era Australian and British identities were synonymous unless you were an Irishman or woman and opposed to the British Crown. It goes without saying that modern day Australian identity has obviously gone through enormous changes since Beazley’s’ day, losing its exclusively British feature and adopting an independent character. But we should not re-write history nor ignore the British identity of the many “Australian” pioneering Australian Rules Football administrators, officials, players and press pundits from that early era of the game.

During WWI, a number of Collingwood footballers rushed to fight for the British Empire, including its club captain Dan Minogue.

Some weeks ago I contacted the office of Collingwood Football Club President, Mr Mark Korda, and was put through to Club Historian Michael Roberts. My questions were would Collingwood renovate its founding father W.D. Beazley’s grave and in a symbolic multicultural gesture would it give a Collingwood jumper to the UK High Commissioner (Ambassador) to Australia, Mrs Vicki Treadall, in acknowledging Beazley’s English heritage? Mr Roberts expressed interest and said he would make a submission to the Collingwood Club board for consideration. 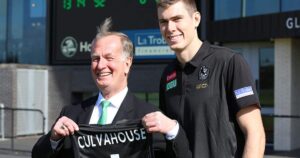 Collingwood some year ago gave the then US Ambassador to Australia, Mr Arthur Culvahouse Jnr,  a Collingwood jumper to promote the fact that one of its players, Mason Cox, was an American. There was enormous media fanfare, television and press coverage of the event. 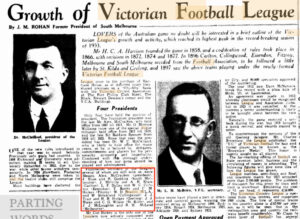 Foundation members of VFL (now the AFL) in 1896

In some reports Edwin Lionel Wilson is credited as the Founding Father of Collingwood in 1892. He became involved with the club as an auditor and committeeman. In 1897 he became the first secretary of the VFL. What’s interesting is he was a British Empire loyalist. In 1910 as VFL Secretary together with VFL President Alex McCracken were so overcome with grief at the death of their King and British Empire that they called for the postponing of matches for a round. 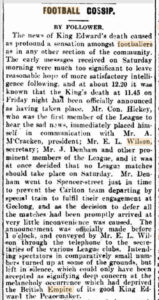 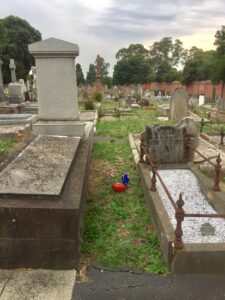 Bennett himself was a British loyalist, clashing with another Victorian MP in Parliament over Britain’s inolvemet in the  South African Boer War (1899-1902). Bennett led a large march through streets of Richmond, Melbourne, paying homage to British General Baden-Powell’s success in South African War! 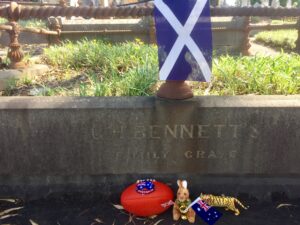 Scottish born TS Marshall, pioneer of Australian Rules Football as an official and as an early player going back to 1858. Was involved with the Carlton Club. Also a pioneer of Fire Fighting Services in Victoria, Australia. He was a contemporary of HCA Harrison, cousin of football founder Tom Willis and himself an important pioneer of the game 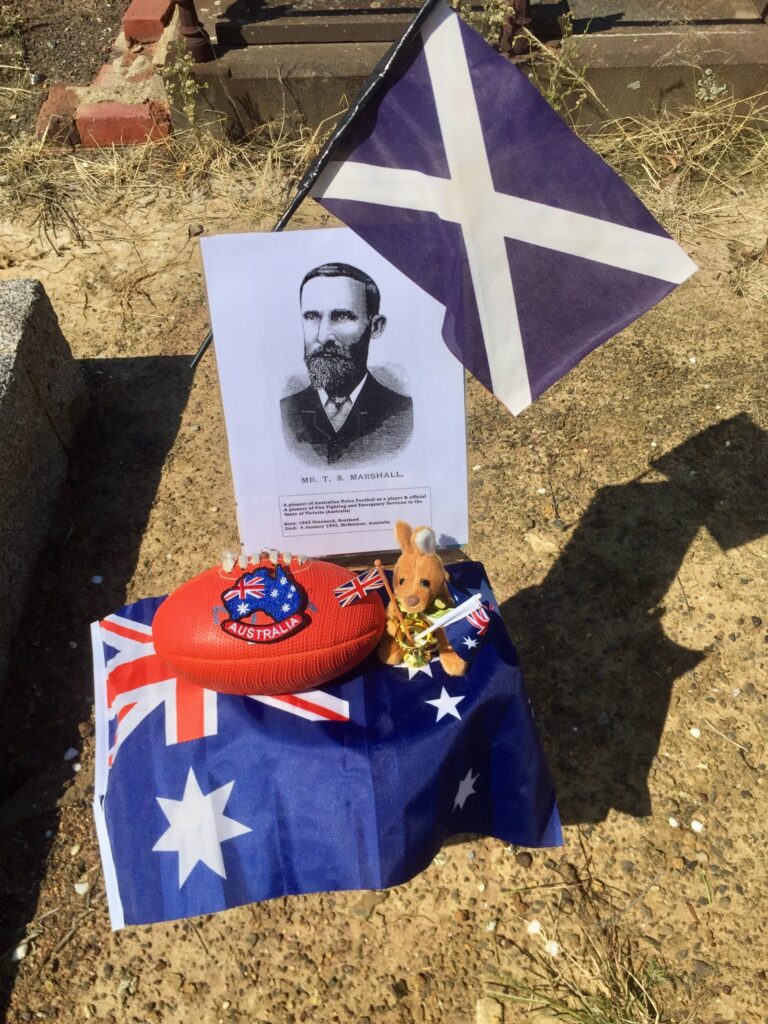 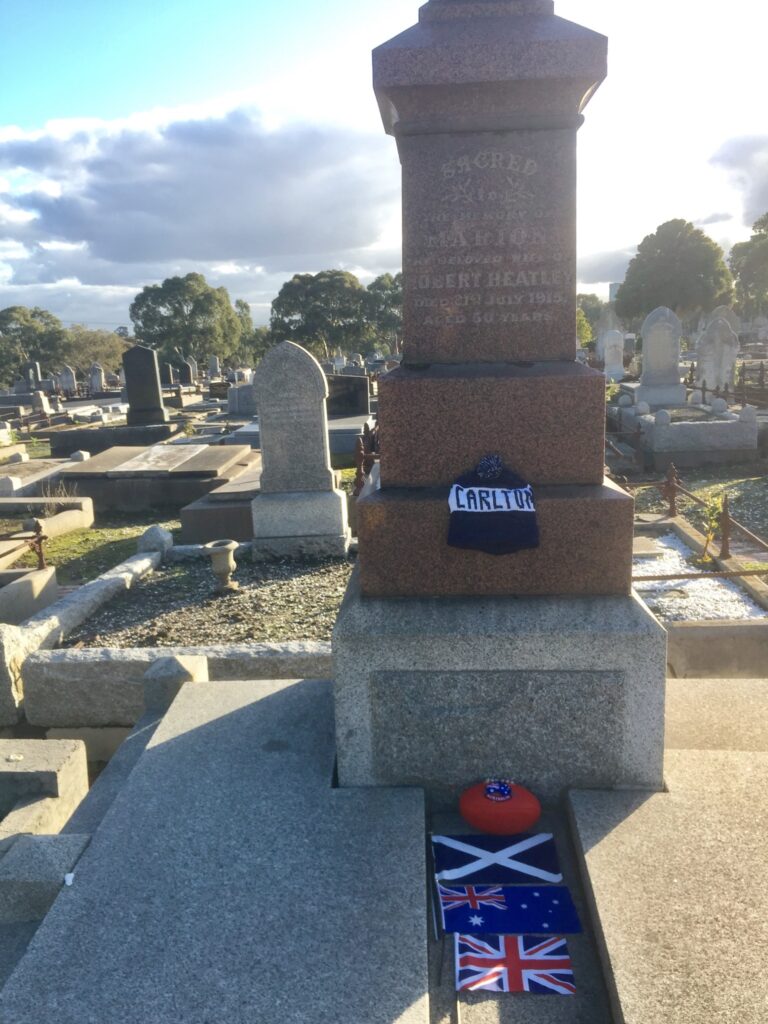 Footballness is next to Godliness ! 1894 Scottish Presbyterian clergyman Reverend Dr Alexander Marshall delivered a sermon at Scots Church in the heart of Melbourne praising and defending Australian Rules Football. His son William later played in the VFL (now AFL). 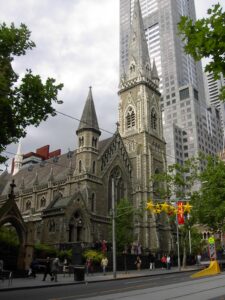 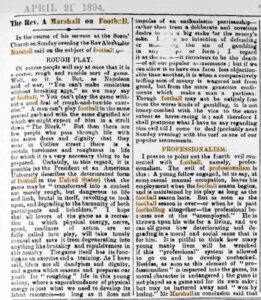 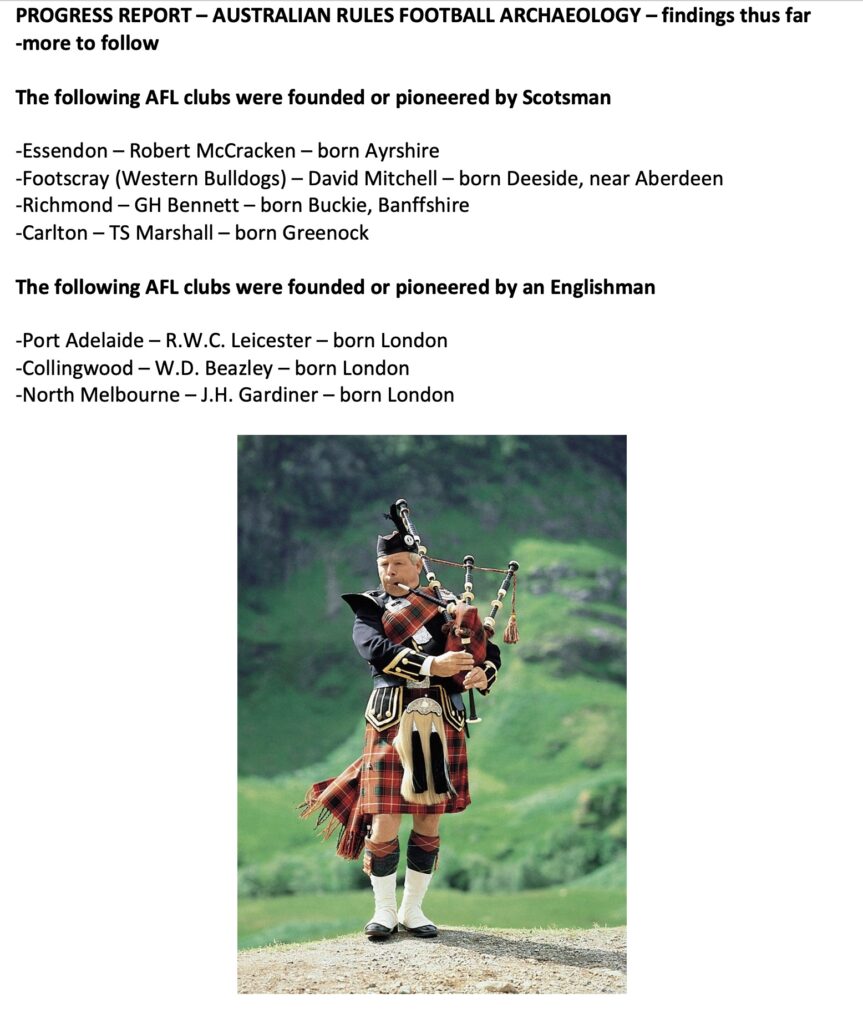