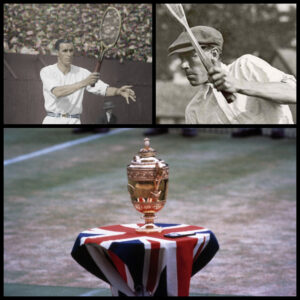 The Australian Open tennis tournament starts next month in Melbourne, Australia and so I was reading the Tennis Australia website profile on Sir Norman Brookes, the country’s first tennis superstar and a man of many parts.

What struck me as odd if not hilarious was the claim he was the first foreigner to win the Wimbledon Men’s Single’s Title – the All England Championship- and de facto World Championship in 1907. That honour really belongs to American Bill Tilden who won in 1920. The Australian Sports Hall of Fame correctly describes Brookes as the first overseas player to have won Wimbledon

When Brookes won the title, he along with nearly all white Australians, were British Subjects (citizens) and held British passports as Australia was part of the British Empire and not an independent nation-state as we now know it. So in that sense, legal sense,  he was not a “foreigner” in relation to Britain. Moreover, Brookes enthusiastically volunteered to fight for the British Empire when war broke out in 1914, in what we now refer to as World War I. In that era Australian and British identities were synonymous unless you were an Irishman or woman and opposed to the British Crown. It goes without saying  that modern day Australian identity has obviously gone through enormous changes since Brookes’ era, losing its exclusively Britishness feature and adopting an independent character. But to re-write history is Orwellian, to say the least.

The original source for the mistake might have come from Australia Post when in 1981 it issued a stamp in Norman Brookes’ honour by calling him the first “non-British” winner of Wimbledon, which is pure nonsense, as Australian identity in Brookes’ era was synonymous with a British one.

Here is the governing body, the Lawn Tennis Association of Australasia (now Tennis Australia), in an official report from 1918 praising Australian and New Zealand players who volunteered to fight for the British Empire in WWI and acknowledging their “Britishness:”

“It is recorded with satisfaction that reports from the war prove that the lawn tennis players of Australasia (Australia and New Zealand) are doing their full share in the fighting for the Empire, and to uphold the prestige and best traditions of the British race.”
The Australian Prime Minister Billy Hughes said in 1917 that: “We are loyal to the Empire first and foremost because we are of the British race.”

In 1915 Brookes told the Australian press that fighting for the British Empire was more important than Australian players competing in tennis:

“…the international champion, shocked so much on his return as to find that tennis players were engaging in their sport and playing in public competitions the same as before the momentous conflict now being waged on  whose outcome of which the fate of the Empire depended. The gravity of the situation was evidently not realised.” 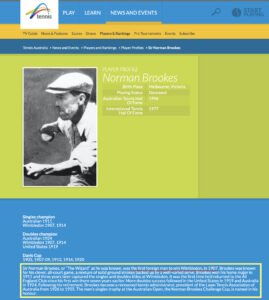 The incorrect claim made by Tennis Australia

The Law Tennis Association of Australasia (Australia and New Zealand), the forerunner of Tennis Australia, in 1917 suspended all local competition in Australia to allow its players and officials to fight for the British Empire in WWI “to give undivided attention to the more serious & vitally important matters connected with defence of our Empire”

After Brookes won Wimbledon in 1907, Anthony Wilding followed up with a first win for New Zealand. Brookes’s fellow Australian and WWI comrade Gerald Patterson snared the title in 1919. Patterson had been commissioned as an officer in the British Army and won a Military Cross for bravery during WWI. Wilding was killed in France fighting for the British Empire in that same war.

A 31 July 1915 newspaper report: “the Lawn Tennis Association of Australasia [now Tennis Australia] at a meeting held in Sydney last week decided, on the motion of the Victorian delegate.-R. W. Kidston-to institute a fund for the purpose of perpetuating the memnory of the-late Anthony Wilding, who crowned his great achievements for Australasia in the sporting arena with a”patriot’s wreath of honor in sacrificing his life for the Empire in its hour of peril.”

Brookes and Wilding represented Australasia (Australia and New Zealand combined) in the early years of the international Davis Cup competition. 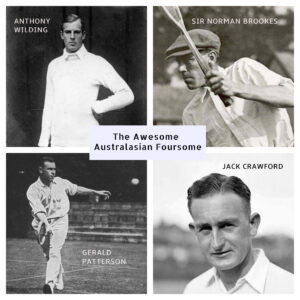 Australia was federated in 1901 and consisted of six seperate British colonies which became states in the new Commonwealth of Australia, a British dominion, a fancy way of saying self governing colony. Australia did not have the power to declare war on anyone which is why it had to wait for Britain to do so in WWI and later in World War II (1939-45). At the time of Anthony WIlding’s win at Wimbledon, New Zealand was a British dominion and New Zealanders were British Subjects. Australia became de jure independent of direct British rule in 1942 with the adoption of the British Parliament’s Statute of Westminster. Australian Citizenship and distinct Australian passport came into being by 1949.

Getting back to Brookes, In 1933 he praised fellow Australian Jack Crawford, who went on to win Wimbledon, and fellow “Britisher” Fred Perry:

“Mr Brookes pointed out that Crawford and Perry have regained for the British Empire the supremacy of the tennis world.”

In 1933 Australian tennis star Jack Crawford came close to winning the first ever Grand Slam in one year (French, Wimbledon, US, Australian tournaments). He would’ve been the first Australian and first British player to do so. But ironically, he lost to fellow Britisher Englishman Fred Perry of Great Britain in the US Champion final. The Australian press of that time referred to the Crawford-Perry US final as an “all-British final.” 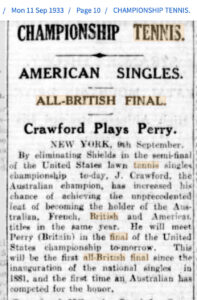 In 1933 Australian Jack Crawford made French Tennis history when he won the men’s singles final : 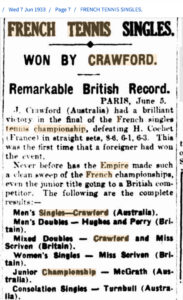 Norman Brookes, Anthony Wilding, Gerald Patterson and Jack Crawford  holds unique records in having one a Grand Slam title for state entities at the same time – Australian and the British Empire; and in Wilding’s case New Zealand the British Empire. These are records that will probably never be broken unless a player from US protectorate Puerto Rico, which has its own sports teams though not an independent nation state – wins one of the Slams.

After winning Wimbledon in 1933, Crawford said in a press interview about himself: “”This is the first time that an Empire player has won the singles title in past 11 years [a reference to Patterson’s 1922 Wimbledon win],”

Both the Australian and British press of that pre independent Australia period regarded American Bill Tilden as the first foreigner to win Wimbledon. 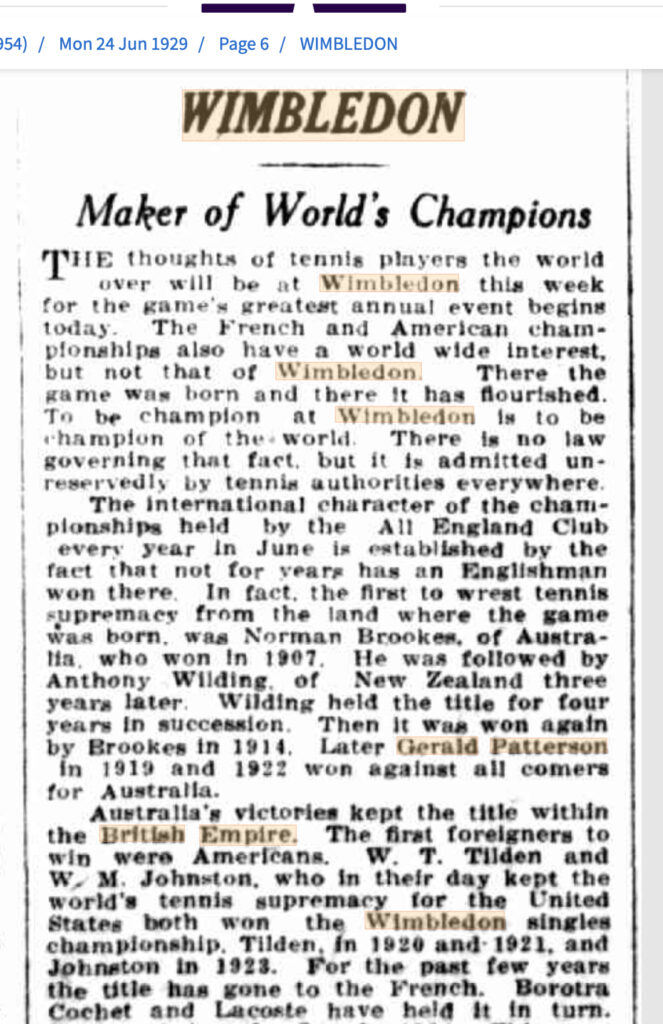 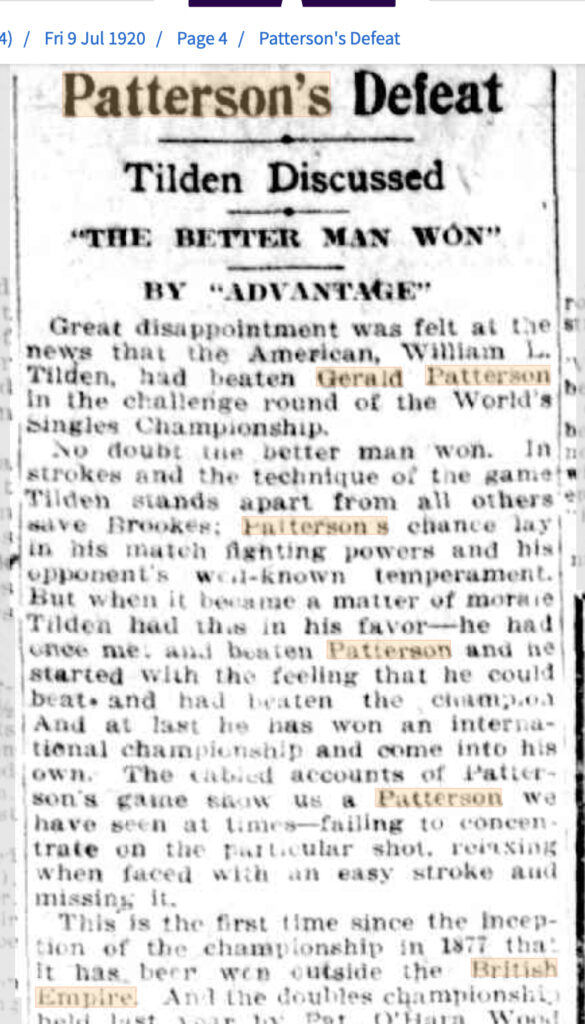 1919 Australian press report citing British press: “Norman Brookes will defend his title of world champion at Wimbledon in June (writes Hubert Winter in Daily Express). No one outside the British Empire has ever won the championship but there was a horrid fear that this year a foreigner might at last capture title” 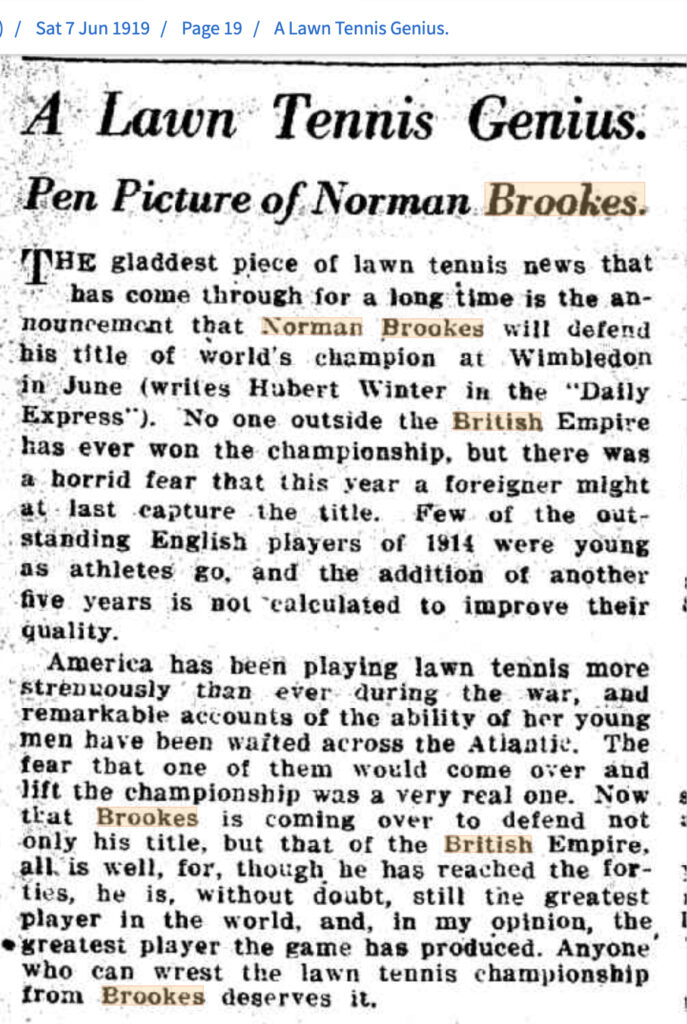 1913 Australian press report on Anthony WIlding’s win at Wimbledon:
When M. E. McLoughlin, of America, won the all comers’ singles, and H. KIenschroth and F. Rahe, of Germany, came through the all-comers’ doubles at the All England tournament at Wimbledon last week, it seemed likely that the two most important championships would be carried off by foreigners,” but a last line of defence, the challenge rounds, had yet to be overcome, and at this ditch Anthony Wilding, of New Zealand, in the Singles, and Roper Barrett and Dixon, of England in the doubles repelled the invaders, and so retained the championships for the British Empire.”

1976 official Australian Department of Immigration & Ethnic Affairs report: a separate Australian citizenship only came into being in 1948 with The Australian Citizenship Act ! Before that Australian “nationality” was British Subject ! 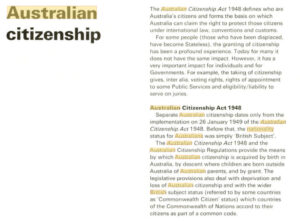 In 1949 Australia’s Immigration Minister Arthur Calwell in an official statement said Australia would be issuing new distinct Australian Passports from 26 January 1949. Meaning Australians travelled on British passports before that period. 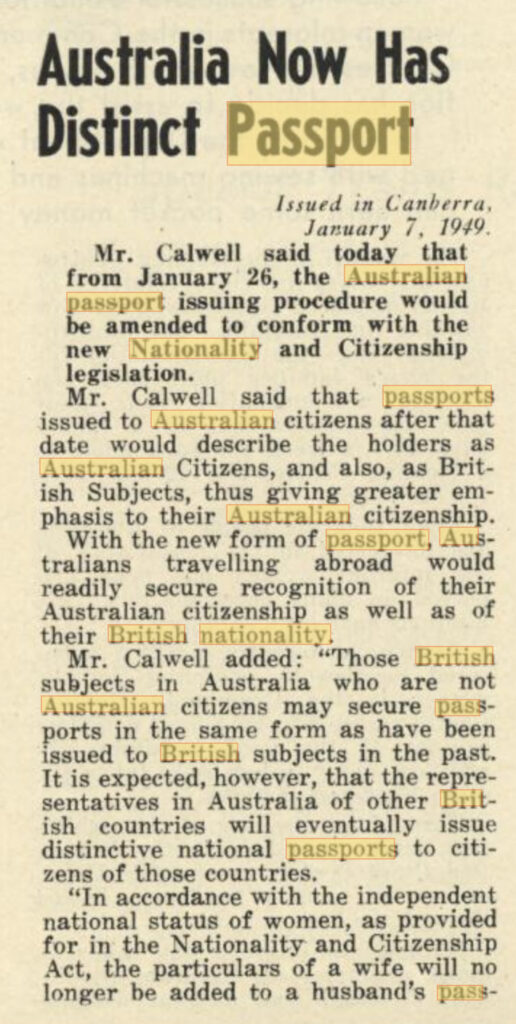 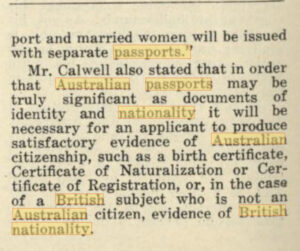 From the National Archives of Australia – a 1937 “Australian passport’ – which clearly has “British passport” written on it and nationality status as “British subject by birth.” 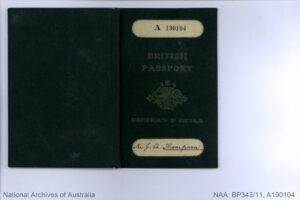 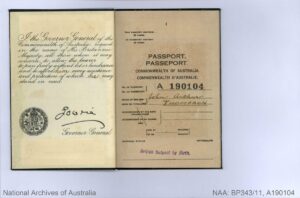 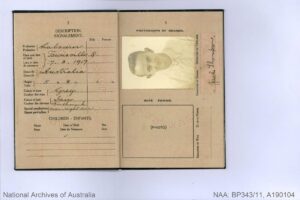 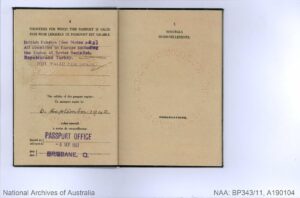 1909 an “Australian passport” with the British coat of arms affixed atop. It reads: “A British Subject of the Commonwealth of Australia.” 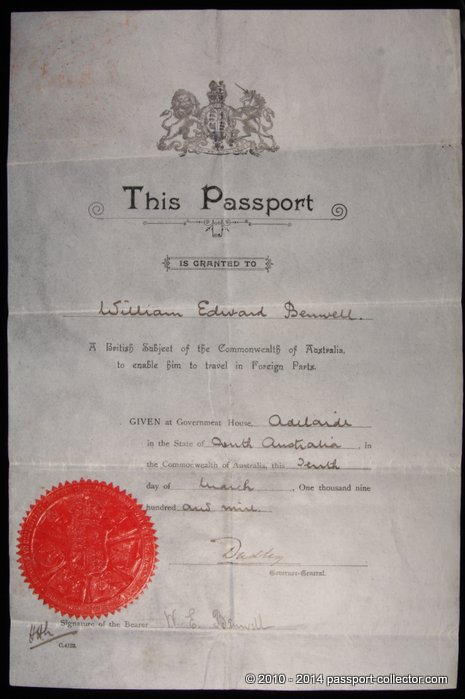