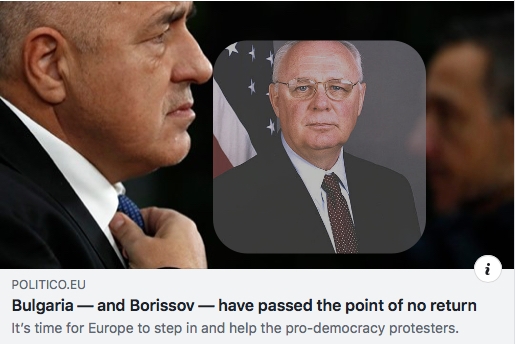 You would’ve noticed that ex-US spook and diplomat James Pardew has been using some very harsh language to describe the Borissov government in Bulgaria.

He are Pardew’s words:

“Bulgaria has a superficial image of a democratic nation, but in reality, its political and judicial structure is rotten at its core.”

The irony is that the US has turned a blind eye to the outrageous behaviour, the corruption, the racism that pervades Bulgaria. There is a right-wing Bulgarian Neo-Nazi party called Ataka which is a junior member of the Borissov government! The country’s Defence Minister the bulky and bombastic Kressimir Karakachanov who is openly a racist and has called for concentration camp-like “reserves” to pen the Roma (Gypsies) in. This goes without saying his and the Bulgarian government’s attacks on Macedonian identity every day in the Bulgar media.

The bigger picture – at stake are four US military bases in the country. A fact that Bulgaria has milked for all its worth and used its EU membership to blackmail Macedonia into giving up its identity, its history. It was also US pressure, behind the scenes, which led to the Prespa Agreement signed between Greece and Macedonia – with the effect of changing Macedonia’s name and erasing its identity to lower just enough Greek opposition to get Macedonia into NATO at all costs.

But Pardew is disingenuous in his attack on the Borissov government for the US and for that matter the EU has pandered to Bulgaria for far too long. In fact, the US has either installed or supported right-wing extremists in the Balkans.

Pardew, who is an ex-US Army intelligence officer and a one time Ambassador to Bulgaria, has a long history in the Balkans. Many Macedonians remember his role installing of right-wing Albanian Neo-Nazi terrorists of Ali Ahmeti via the short-lived 2001 war.

Pardew’s official role was that of a special envoy to negotiate peace but as Canadian journalist, Scott Taylor, who covered the war in Macedonia, wrote in his book Diary of an Uncivil War:

“Pardew is viewed as a strong Albanian supporter rather than an honest peace broker. Several times during the crisis he was able to exert tremendous pressure on the Macedonian government – particularly in forcing them to abort an offensive in Aracinovo. When the UCK [KLA/NLA – Albanian terrorists] ambushed a Macedonian police patrol in November 2001, Pardew was accused of having tipped off the Albanian guerillas.”

So why has Pardew turned on Borissov? There could be a number of reasons. The most obvious one is the thoroughly corrupt nature of the Bulgarian government which is embarrassing to Washington and probably threatens Bulgaria’s stability and with it the four US military bases. More to do with US self interest than democracy and rule of law?

There are anti-Semitism, Holocaust Denial, and attacks on Macedonian identity where they didn’t exist in the public discourse – all because the Macedonian government is desperate to get into the EU and doesn’t want to “offend” Bulgaria in any way, which has threatened to veto Macedonia’s EU membership application.

All of this has come about because of the US.