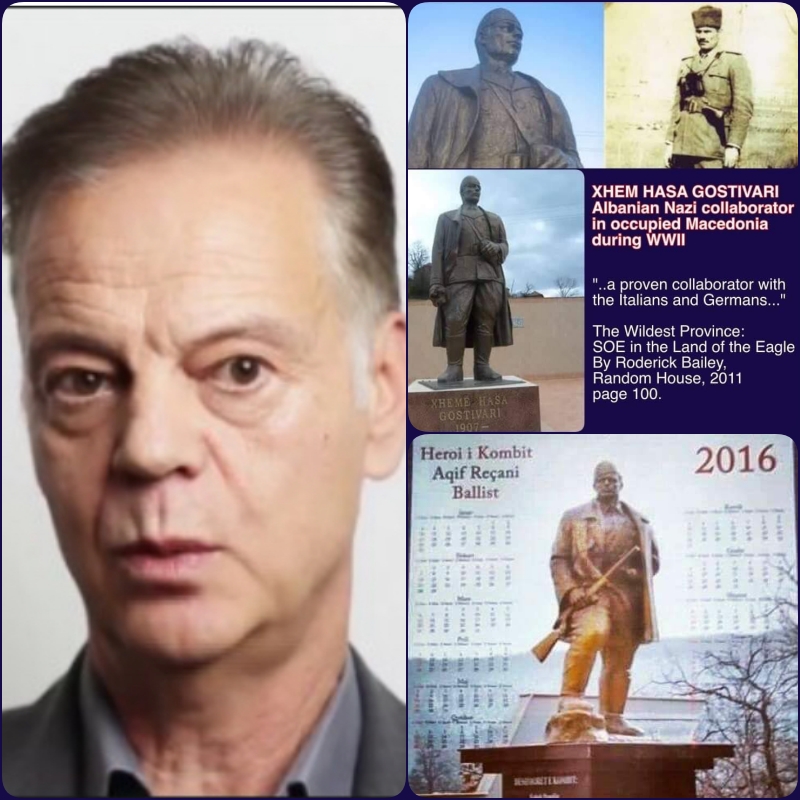 Miroslav Grcev, who chairs a Macedonia Culture Ministry committee wanting to remove Macedonian statues part of the Skopje 2014 project, says he also supports the demolition of World War II Albanian Nazi collaborator statues that have been built in Macedonia but is powerless to act.

He was asked for his view in a telephone interview.

“Shameful, absolutely shameful,” he described the WWII Albanian Nazi statues. “But that hasn’t been included in my tasks. I’m not authorised to cover the whole territory of -and things that occur -in Macedonia.”

The WWII Albanian Nazi collaborator statues are located near the town of Gostivar, about 65km southeast of the capital, Skopje. It has a large ethnic Albanian population.

Mr Grcev’s brief from the Ministry of Culture only covers Skopje.

The WWII Albanian Nazi collaborator statues are of Xhem Hasa Gostivari, a Senior Commander of the quisling militia, the Balli Kombetar, in Macedonia during WWII, and another Balli Kombetar Commander in Macedonia, Aqif Krosi Recani. The Balli Kombetar’s supreme leader, Midhat Frasheri, based in Tirana, Albania, was actively involved in the deportation of Kosovo Jews to the Nazi death camps.

The statues were built by right wing Albanian extremist Nevzat Bejta, a former KLA terrorist commander from the 2001 war in Macedonia turned politician.

Bejta is a leading figure in the right wing Albanian Neo Nazi party in Macedonia, DUI, which is also a coalition partner in Prime Minister Zoran Zaev’s government.

DUI which is regarded as pro US and as a consequence the Albanian Nazi statues remain a touchy subject with the western media refusing to report on them.

Nazi statues are banned in Germany and Austria, the birthplaces of Nazism and Adolf Hitler.