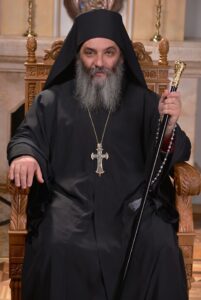 Macedonian Orthodox Bishop Partenije, who is based in the Republic of Macedonia and formerly the Abbot of the Sveti Jovan (Saint John) Bigorski Monastery, has drawn close to a Bulgarian ultra-nationalist Andrey Kovatchev, a member of the European Parliament who is a Holocaust Denier and staunch anti-Macedonian. Bishop Partenije supports the controversial “Goodneighbourly Deal” signed between Bulgaria and Macedonia which is nothing short of blackmail and forces Macedonia to give up its identity, history to Bulgaria, including whitewashing Bulgaria’s role in the Holocaust of the Jews in Macedonia during WWII. In return, Bulgaria won’t use its veto to block Macedonia from joining the European Union.

Macedonia was strong-armed by the US to sign the Prespa Agreement with Greece – which also erases Macedonian identity and changed the country’s name to “North” Macedonia- in return for Greece dropping its veto of Macedonia joining the EU and NATO. Greece is a long-standing ally of the US. There are 4 US military bases in Bulgaria, which are of strategic importance to Washington.

I am no longer secretary of the Macedonian Orthodox Diocese of Australia – Sydney (MODAS).

As Vice President of the Macedonian Community of Western Australia,  I can provide you with the following comment:

We are extremely disappointed but not surprised to hear recent reports of the recent nomination of Archimandrite Partenie to become a member of the Holy Synod and Bishop of the Macedonian Orthodox Church.
Whilst he no doubt has the qualifications and relevant experience to become a bishop, over recent times his controversial and unashamed pro-Bulgarian statements and open support for the traitorous quisling Macedonian Government leave us in the diaspora with feelings of great resentment and shame.

Unfortunately, over the past 3 years of this treacherous and corrupt quisling regime in Macedonia, the Macedonian Orthodox Church, with the noted and much appreciated exception of His Eminence Bishop Agatangel, has not stood up to protect the national interests of the Republic of Macedonia and has actually jeopardised the very existence of the Macedonian Orthodox Church as an autocephalous institution with its pathetic attempts to appease the Bulgarian, Greek and Serbian Orthodox churches in its desperate attempts for official recognition from these hostile quarters.

The silence of the Holy Synod of the Macedonian Orthodox Church over:
the traitorous Prespa Agreement with Greece which illegally changed our name to North Macedonia against the will of our people;
the Bilingual Laws forcing Albanian to be an official language of Macedonia; and
the so-called “Good Relations Agreement” with Bulgaria,
is shameful, totally unacceptable and unbecoming of the Macedonian Orthodox Church which for centuries has been a beacon of light for our people who have suffered greatly under centuries of cruel Ottoman, Greek, Serbian and Bulgarian oppression.