To fully understand the paradox of Macedonia and its culture and the impact of various foreign colonial occupations: we need not look any further than ex Macedonian Foreign Minister Denko Maleski’s incredible transformation from one extreme to another: going from being a Serboman (pro Serb Macedonian or Yugoslavist) to a Bulgaroman (pro Bulgarian).

Recently, Maleski came out with the preposterous claim that Macedonians and Bulgarians were the one people who after World War II because of Serb-Yugoslavist influence had split into two different ethnic groups. Thus a Macedonian identity was created ! It’s a laughable theory that’s being peddled by Bulgaria and now imposed upon Macedonia.

According to two 1926 British diplomatic eyewitness accounts -UK diplomats asking Macedonians (then under Serb and Greek colonial rule) how they identify and they answer they are Macedonian but not Serb nor Bulgar. link here

Then there is this 1905 report in the US press quoting American Jewish leader Leon Zolotkoff who says Macedonians are a distinct nationality!

“The Greeks, Roumanians and Macedonians have established nationalities within the past century…”
Omaha Daily Bee newspaper, Nebraska, US, November 14, 1905, Page 5 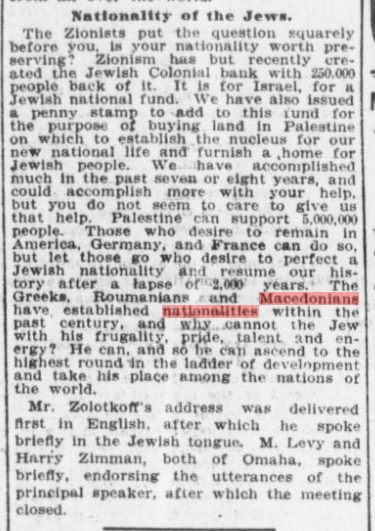 Maleski is being used as the sounding board to gauge Macedonian public opinion, that is if they are willing to capitulate. Bulgaria demands that Macedonia give up an ethnic Maceodnian minority in Bulgaria, hand over its language, history and its identity to Bulgaria in “return” for Bulgaria not blocking Macedonia’s European Union membership.

It’s utter nonsense that Macedonians and Bulgarians are one people and as will be explained contradictory coming from Maleski. The real reason for Maleski’s claim lies more with US geo-strategic interests in the Balkans, that is satisfying Greek and Bulgarian demands over Macedonia.

In 1913 after five centuries of Ottoman colonial occupation, Macedonia was partitioned between Greece, Bulgaria, and Serbia. And in all three a brutal process of assimilation took place – forcibly turning Macedonians by the threat of the sword or offer of silver into becoming Greek, Bulgar or Serb. And to any native peoples around the world who have been brutally colonised and had colonial settlers imposed upon, the feelings of confusion over identity, an inferiority complex or colonial slave mentality are common cultural traits. Macedonians being no exception.

Denko Maleski became Macedonia’s first Foreign Minister when the country became independent by breaking away from Serb dominated Yugoslavia in September 1991 after an overwhelming majority of Macedonians voted yes in a referendum, which was boycotted by ethnic Albanians and Serbs. But he was aggressively opposed to Macedonian independence from day one. He had to be dragged kicking and screaming by then Macedonia’s President Kiro Gligorov.

Maleski saw himself as a Yugoslavist first who just happened to speak Macedonian and never really supported the concept of an independent Macedonia or Macedonian culture. Deep down he was anti US, anti-NATO and pro-Slobodan Milosevic, the then hardline ruler of Serbia until his demise in 2000 at the hands of the US.

Maleski was not the only one who thought like this. His political party SDSM, which grew out of the old Macedonian Communist Party was primarily filled with people – both native Macedonians and ethnic Serbs,  mainly of colonial settler ancestry, who thought the same –  who saw themselves as Yugoslavists but just happened to speak Macedonian. That was the by-product of Tito’s Yugoslavia.

Contrary to Greek and Bulgarian claims, Tito did not invent a Macedonian nationality it had already existed. What he did was he took a hearty Macedonian identity and either deliberately or unintentionally hollowed it out and making it susceptible and weak post-1991 to foreign attacks and subversion.

During World War II, in order to kick start the partisan resistance movement in Macedonia against Nazi occupation, the offer of some kind of Macedonian autonomy or state was the inducement to swell the ranks of the Macedonian partisans, though independent from Tito’s Yugoslav partisans, as well as the Yugoslav Communist Party. Simply put Macedonians wanted a state of their own – it wasn’t Tito who created a Macedonian identity but rather taking it on board in his version of a federal communist Yugoslavia along the lines of the Soviet Union. This is an important point that must be emphasised. But it gets deliberately twisted by Greek and Bulgar nationalists for their own respective agendas.

Gligorov, the founding father of Macedonia, own son Vladimir Gligorov gave up his Macedonian identity and converted to a Serb identity during Tito’s Yugoslavia in which Macedonians were officially regarded as one of the four “nationalities,” had their own republic – a  semi-independent state. Vladimir Gligorov has moved on to “bigger and better things” and is now an Austrian. Both father and son remained estranged “politically.”

Yet anyone who deviated from the Yugoslavist thinking was labelled a “Macedonian nationalist” whether they were or not, or worse called a “Bulgaroman” (pro Bulgarian). When Yugoslavia collapsed in 1991, these people’s very world collapsed. They were in a state of confusion. They didn’t know where to turn. They didn’t want Macedonian independence but felt there was no longer any financial advantage or privilege in staying in a rump and internationally isolated -because of UN sanctions over the 1990s war – in rump Yugoslavia run by Milosevic, even though they still felt a strong cultural connection to him in Belgrade. In effect, this clique kept its arrogant views towards the average native Macedonian but swapped Belgrade for Brussels and Washington.

According to various US declassified documents, the SDSM government of Branko Crvenkovski was heavily involved in UN sanctions busting for Milosevic, who was isolated because of his role in the wars in the former Yugoslavia. 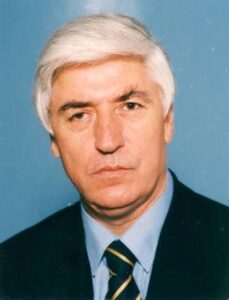 At the 1999 Macedonian Presidential elections, the SDSM candidate the appropriately named Tito Petkovski ran on anti-West platform alleging a foreign cabal of Bulgaria and Albanian teamed up with US wanted to partition Macedonia. The hilarious thing is the claim is probably true but Tito Petkovski, especially after the fall of Milosevic in 2000, has changed his tune dramatically, now supporting the US, NATO and the name change of Macedonia inflicted upon it by the SDSM government of Zoran Zaev.

The use of Denko Maleski, current Macedonia President Stevo Pendarovski, and academic Vlado Kambovski and others in handing over Macedonian identity to the Greeks and Bulgars indicates a number of clear things:

1. Grass-roots support for the US amongst native Macedonians is minimal or superficial at least.

2. Because US support for the US is minimal, the US is so desperate to satisfy its Greek and Bulgar allies that it has had to resort to using people – aforementioned and others -including installing as a future “insurance policy” proxies such as Albanian Neo Nazi extremists Ali Ahmeti and company via the 2001 war.

3. These people – Maleski and his clique – were hardcore Serb-Yugoslavists who were opposed to the US and NATO but now support the US and NATO. This indicates the US has some compromising material on these individuals and is blackmailing them to support Washington’s agenda including coming out with statements alleging Macedonians are Bulgarians!  Maleski was staunchly anti American and his doctorate critiqued “American imperialism.”

Denko Maleski was opposed to Macedonian independence and wanted to keep Macedonia within Serb-Yugoslavia; Macedonia’s current President Stevo Pendarovski was a counter-intelligence officer in Macedonian’s Interior Ministry who was complicit in UN sanctions busting for Milosevic; Vlado Kambovski – quoted in the US press at the time – as Yugoslavia’s last Federal Justice Minister threatened Slovenia with violence in 1990 if it broke away from Yugoslavia and joined the West, including NATO. It’s no coincidence that Maleski is a senior advisor to Pendarovski, who was elected Macedonia’s President.

-When I applied under the US Freedom of Information Act (FOIA) for any files the CIA might hold on Pendarovski the request was rejected on the grounds it might compromise US national security.

There are 4 US military bases in Bulgaria and a large Naval Base on the Greek island of Crete which are more important to the US than allowing Macedonians to keep hero Goce Delcev. Open up a real debate not a pretend one. 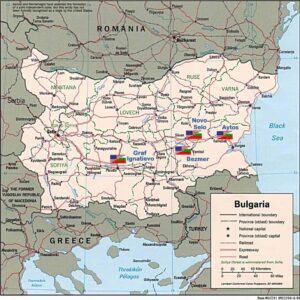 The US’s claim that there is Russian interference in Macedonia has been used as a cover – a flimsy one at that – to hand over Macedonian identity to Greece and Bulgaria in order to get into NATO and the EU simply doesn’t stand up to scrutiny. No hard evidence is ever produced. There was a very loud claim repeated over and over again of Russia allegedly using Serbia to meddle in Macedonia yet not one protest has ever been held outside the Serb Embassy in Macedonia to back this claim. Not one.

The Prespa Agreement signed between Greece and Macedonia in 2018 and the 2017 so-called Goodneighbourly Agreement with Bulgaria are nothing short of blackmail – extortion – of a weaker state, Macedonia. The objective is to erase it and the Macedonian people who cause too much “problems” for US allies Greece and Bulgaria. That’s what it boils down to.

The West using the likes of Denko Maleski is not surprising. The alarming consequence of Bulgaria’s malign influence – blackmail – has seen the rise of anti-Semitism in Macedonia where traditionally it has not existed. What is not explicitly mentioned but is implicit in Bulgaria’s demand to re-write history of Macedonia is whitewashing Bulgaria’s Nazi collaboration during WWII and occupation of Macedonia, the brutal treatment of Macedonians and the genocide of the Jews.

A future Bulgarian government could even demand the closure of the Holocaust museum in Skopje, Macedonia because it could be seen as peddling hostile “anti-Bulgarian views.”

More on the Prespa Agreement at this link here

More on the Agreement with Bulgaria at this link here