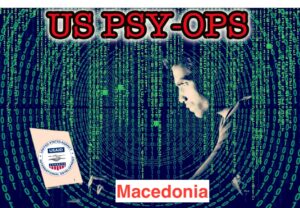 Psychological Operations (Psy-Ops), have been known by many other names or terms, including Psy Ops, political warfare, psychological warfare,  “Hearts and Minds”, and propaganda. The term is used “to denote any action which is practiced mainly by psychological methods with the aim of evoking a planned psychological reaction in other people”

US PSY-OPS IN MACEDONIA – the Armageddon that never was ?

In 2017 the Ukraine Ambassador to Serbia, Oleksandr Alexandrovych, taking his cue from one of those American television evangelists, conjured up an end of days scenario, a final judgement; Armageddon about to befall Europe. And the great Satan, according to the Ambassador, was Russia and its loyal demon Serbia. 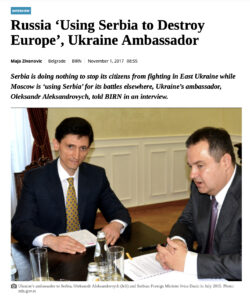 This extraordinary, incredible fire and brimstone sermon was delivered via the pulpit of Balkan Insight, a website funded by the US and UK governments. This simply echoed an earlier claim by the pro West media that Russia via Serbia were the instigators of a riot in the Macedonian Parliament on 27 April 2017. The narrative was VMRO-DPMNE, the main nationalist Macedonian party, and its supporters stormed the parliament to stop US proxy Zoran Zaev from coming to power and nasty Moscow was the sponsor.

Yet with all this impending talk of Armageddon about to hit to the Balkans and Macedonia, not one protest has been held at the Serb Embassy in Macedonia by pro US Serbs and pro US Macedonians to back up this extravagant claim. How can you sell a conspiracy theory when some of your key supporters refuse to? Leading pro US Serbs in Macedonia such as Pavle Bogoevski, of the so called Colour Revolution, on two occasions stated emphatically and aggressively that he refuses to protest against Serbia. On another note, his refusal suggests he isn’t the so called “anti nationalist” activist he claims to be but a racist opportunist used by the US out of desperation.

Moreover, in the “terrorism” trials that were held in Macedonia over the riot , the Public Prosecutors simply made no mention nor produced any “evidence” of a Russian-Serbian intelligence operations behind the attack. Not one shred of evidence has been passed on to Macedonian authorties by  US intelligence. The US’s National Security Agency (NSA) runs a series of powerful spy satellites & terrestrial stations including Pine Gap in Australia which can evesdrop on any mobile phone call anywhere in the world.

Critics have called the trials nothing more than political show trials. Others go further and claim the riot in the Macedonian Parliament was a US false flag operation in order to install Zaev into power. There were claims of US arm twisting of the then Macedonian President George Ivanov to give Zaev a mandate to form the government.

Since becoming Macedonia’s Prime Minister, Zaev changed Macedonia’s name – which has pleased the US immensely – by blackmailing a number of VMRO-DPMNE MPs with prosecution for “terrorism” over the parliamentary riot. US State Department mandarin Matthew Palmer refused to respond to claims of US interference.

Let’s get one thing straight here – Russia isn’t the white knight in shining armour out to rescue Macedonia as some Macedonians naively believe. Its no golden haired angel. It has its own strategic interests. Ukraine, Caucasaes, Serbia, Montenegro and Republika Srpska in Bosnia are of more interest to Moscow.

Be that as it may and despite the repeated claims – ad nauseam –  and to put it bluntly there is no so called Russian “interference” in Macedonia, which has been a de facto US protectorate since its independence from the crumbling Yugoslavia in 1991. There is no Serb conspiracy being cooked up in Macedonia against NATO Bulgaria either.

The US has poured millions of taxpayer dollars in various programs to combat Russian “interference” in Macedonia, which it claims turns Macedonians against the US. But the US Congress funds “cyber activists” to block anyone critical of US propaganda.

The underlying assumption here is a racist and patronising one – it implies Macedonians are critical of US foreign policy – such as the US imposed name change of Macedonia to get it into NATO– because some guy, a hacker called Dimitri or Ivan, in a dingy tiny Moscow apartment he shares with his elderly pensioner mother and divorced sister is conducting “hybrid” war at the behest of Vladimir Putin in pumping the internet with “fake news” and disinformation.

Many Macedonians are critical of Washington without Russia needing to spend a rouble or Dimitri of Ivan the hacker pressing a computer button. The US openly supports right wing Albanian Neo Nazis in Macedonia who glorifiy WW2 Albanian Nazi collaborators.  It installed these extremists as puppets in a 2001 war in Macedonia under the guise of “civil rights” yet paradoxically these terrorists have an agenda, an ideology which harks back to WW2 fascism, such as a Greater Albania and ethnic cleansing of Macedonians from the western regions of Macedonia where there are pockets of an Albanian majority.

In an interesting parallel, concerned independent Jewish activists, who aren’t under the control of Washington or Moscow, have been warning about US taxpayer money going to Neo Nazi groups in the Ukraine, a plea which has falledn on deaf ears.  Simply put, the US will use anyone as long as they are anti Russian.US

The US’s objectives in Macedonia are related to purely selfish US strategic interests – that is keeping critical allies Greece and Bulgaria on side at Macedonia’s expense, which means changing Macedonia’s name, identity and history. Using the fear of Russia is a political smokescreen.