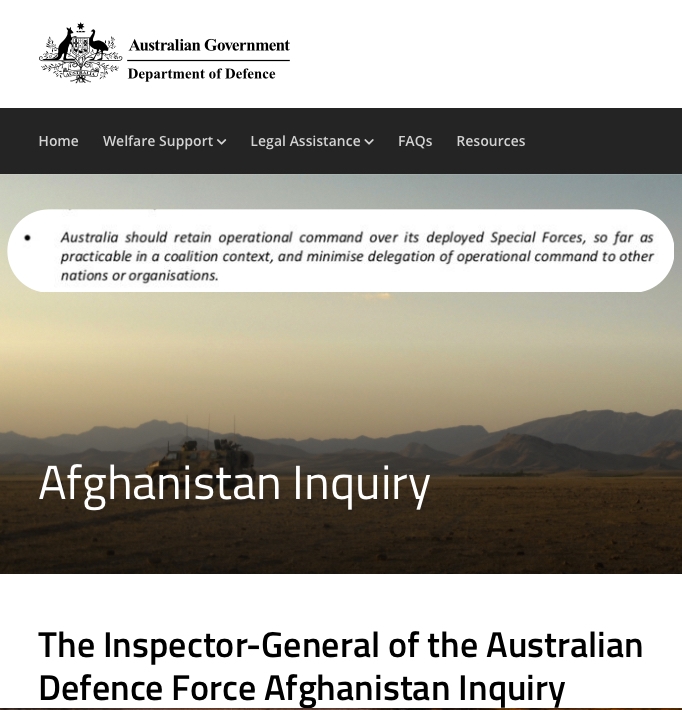 What hits you about the Brereton Report – the Australian Defence Forces’ investigations into alleged war crimes committed by Australian Special Forces in the Afghanistan war is if Australia did not deploy to the conflict in that country at the behest of the United States then there would be no mess today.

Nineteen of Australia’s elite SASR (Special Air Service Regiment) are alleged to have committed war crimes but as with anything relating to potential criminal charges there is a presumption of innocence until the issue gets to an Australian court, should it get that far, and then hands down a verdict of guilty or not guilty.

Let’s assume for argument’s sake the allegations are true. The more likely explanation is this is an aberration, a result of Afghan mission burnout rather than a systematic problem with the Australian Army and the Australian Defence Forces. The culprits, a handful of individuals, believing they are a law onto themselves, and deciding to cut moral and military corners in order to achieve success whatever success might mean in a complex conflict in Afghanistan, much like Vietnam. You can see my comments from a decade ago back in 2010 for Paul Toohey of News Limited newspapers, explaining the Afghan conflict at this link.

Afghanistan is Australia’s longest war beginning in 2001 and ending recently. Yet we have come full circle for no gain. The original objective was to remove the Taliban regime, a supporter of Al Qaeda and Osama Bin Laden in the wake of the 9/11 terror attack in New York, from power in Afghanistan. That happened but the US is now in negotiations with the very same Taliban it ousted from power and replaced with the Karzai government, riddled with corruption.

Morally it is reprehensible to commit war crimes and militarily counter-productive as it swells the ranks of the enemy you are fighting. It goes against the doctrine of counter-insurgency war.

However, the unfortunate consequence of all of this is the tarring of all Australian service personnel with the same brush.

Be that as it may, some of us warned back in 2008 that “Special Forces Burnout” would be a problem:

“To top that off, a legacy of the Nelson-Howard military doctrine has the Special Forces doing most of the fighting, because of the fear of casualties to our regular infantry units. The long term effect could be burn out of our Special Forces. But the irony is if we withdraw our SF units and do not replace them with infantry units, then the pressure on the Taliban is eased. It is one contradictory military doctrine, to say the least.”

The Australian Howard Federal government at the time [1999] deliberately used the Army’s elite Special Forces unit, SASR (Special Air Service Regiment), to do most of the fighting in East Timor, which should have been performed by the infantry.

The political logic was that the public and media would accept SASR casualties rather than a 19-year-old infantryman, fresh out of home or from a small country town.

But political logic does not necessarily make good military sense and vice-versa. In East Timor, the pro-Indonesian militia tried to inflict as many casualties as possible on our infantry units, including battalions made up of many reserve/part-time soldiers, in the hope that Australia would withdraw.

The moral of the story is no matter how hard the Australian government tried to insulate our infantry from combat by using the SASR, the unexpected happened.

The SASR and 4RAR (Commando) [later renamed 2nd Commando Regiment] are our 2 Specials Forces units and are a surgical tool–to be used sparingly–not a blunt instrument.

Australian infantry soldiers have recently expressed their dissatisfaction at being kept away from the sharp end in Afghanistan.

But how long can the incoming Rudd government use the SASR and 4RAR (Commando) in an infantry role, until they become worn out?

When will the government allow our infantry soldiers to do the job they have trained for? 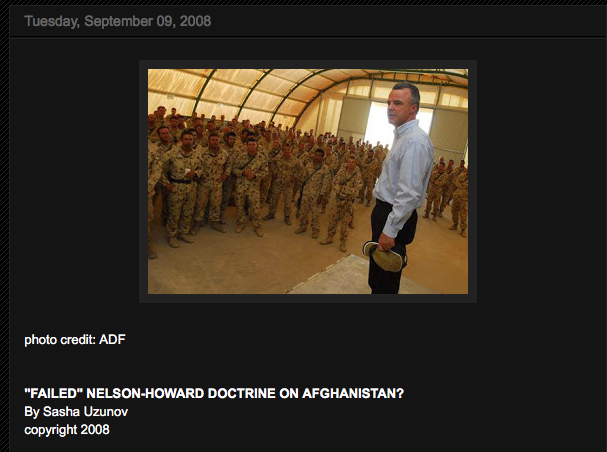 Yet twelve years later in 2020, the Brereton Report found – “…that protracted and repeated deployment of special forces troops  – due to fatigue and a lost sense of purpose – was a contributing factor to the incidents uncovered.”

“Major General Brereton’s report also identified cultural problems around secrecy, fabrication and deceit within some SAS squadrons, with veterans describing a “warrior culture” of “arrogance”, “exceptionalism” and a feeling of being “untouchable”.

“It is alleged that some patrols took the law into their own hands, rules were broken, stories concocted, lies told and prisoners killed,” General [Angus] Campbell [Chief of the ADF] said.

The inquiry alleged that members of the SAS [SASR] were “not well-mentored, but were rather left to swim or sink”.

The Report also found that some NCOs – Corporals and Sergeants – were largely to blame but whitewashing the behaviour of senior ranks.

The SASR is a highly prized military asset that also gathers battlefield intelligence which ends up with Australia’s allies-US, UK (under the Five Eyes Agreement) & NATO. How is it possible for Generals not to know what’s going on? Or for that matter politicians?

It is preposterous to claim the SASR was held “hostage” by a handful of beer-swilling Sergeants sitting in the Sergeants Mess at Uruzgan or Swanbourne poking fun at Lieutenants, Captains, Majors who were somehow petrified to act. In fact, it is an indirect admission of a dereliction of duty by senior ranks who in all probability turned a blind eye or deliberately didn’t want to know.

And since the heat via the exposures of alleged war crimes by investigative reporters Mark Willacy, Chris Masters and Nick McKenzie has fallen on politicians and automatically the generals, then it looks like an exercise in damage control by the Morrison government to pin the blame on lower ranks.

All of this could have been avoided if Australia had taken a more sceptical and reserved approach to deploying military assets to Afghanistan at the behest of the US in the first place.

The Brereton Report recommended that Australian Special Forces come under Australian operational command and not the US or NATO in any future wars waged by a coalition of allies, including Australia in that coalition. That is a very important point to remember.

Australia and the US are staunch allies and as allies need to be honest with each other even if that requires some “tough love.”

During the East Timor crisis in 1999, the US avoided a direct combat role and placed the onerous task upon Australia to restore order in the breakaway Indonesian province because it didn’t want to hurt its long-standing diplomatic relations with Indonesia – the sponsor of the proxy militia groups terrorising East Timor. The US instead provided Australia with valuable intelligence and logistical support. So Washington put its strategic needs first.

In the Afghanistan war which began in 2001 and lasted over a decade, Australia had no strategic interest in being there. This was a war between the US/NATO coalition and the Taliban. Australia should have provided any intelligence and political support but no combat troops or special forces.

Australia needs to protect its good image globally. The US supports some unsavoury characters around the world. One small example will suffice – the US supports right-wing Albanian Neo-Nazi extremists in Macedonia who glorify WW2 Albanian Nazi collaborators.