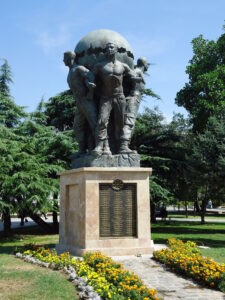 You’ve all been following the crisis unfolding in the Ukraine, US at first alleging that Russia is about to invade Ukraine and the associated tough talking from US President Joe Biden and a cacophony of his allies or proxies ranging from the British Prime Minister Boris Johnson to Australia’s PM Scott Morrison and the EU, backing the Ukraine’s right to self defence and so on. The Russians claim that the US is behind the whole scenario of deliberately talking up a war.

Prior to hostilities, the US sent military equipment to the Ukraine, worth over $200 million US, for the nation to defend itself with. Ukraine is not a NATO member but has aspirations of joining, which is strongly opposed by Russia’s President Vladimir Putin, who sees it as an encroachment upon his strategic turf. Putin also justifies his invasion on the claim that Ukraine was considering obtaining nuclear weapons to be positioned in Russia’s underbelly.

That’s what it boils down to. Putin doesn’t want NATO in his backyard.

Whatever you might feel about it, whether you support the US or Russia, I don’t want to get bogged down in that too much for now, which deserves a story in its own right. Suffice to say that Russia’s invasion must be condemned and the Ukrainians have a right to their nation-state and identity. The use of force is wrong. But It’s not a simple question of black and white. Russian strongman Vladimir Putin has watched and learnt from how the US has intervened in foreign countries ranging in the Balkans such as Kosovo in 1999 to Afghanistan in 2001, Iraq in 2003, and subsequently Libya, Syria and even Venezuela. and or subverted harmless governments, such as in Macedonia  not to the liking US “interests. But having said that I have to strongly emphasise that two wrongs don’t make a right – US being nasty doesn’t justify Russia being nasty nor does Russia being nasty justify the US being nasty. The Russian invasion of the Ukraine is morally wrong and must be condemned in the strongest terms.

I’m interested in the selectivity or bluntly put the hypocritical way in which the US picks and chooses which nation-states can defend themselves from attack; whether they can obtain arms to defend themselves and whether or not they even get a security guarantee from the US.

Case in point -in 2001 the US and NATO strong armed the Ukraine, Macedonia’s makeshift ally and supplier of weapons, to cut the flow of arms to Macedonia then fighting for its very survival against a right wing Albanian Neo Nazi insurgency led by a man called Ali Ahmeti of a groups calling itself the National Liberation Army (NLA), an offshoot of the Kosovo Liberation Army (KLA) terror franchise, whose objectives was to take away a large slice of Macedonian territory. The newly independent republic which broke away from Yugoslavia in 1991 had fortunately missed out on the carnage and war raging in the other parts of then ex-Yugoslavia- Slovenia, Croatia, Bosnia.

Macedonia had been left defenceless when the Serb dominated Yugoslav People’s Army (JNA) finally withdrew from Macedonia in February 1992, taking any thing it could carry away even ripping off sinks and taps from former barracks. Moreover, deliberate US and UK sabotaging of Macedonia’s recognition in the early 1990s on behalf of Greece left it completely vulnerable. So almost a decade later in 2001 when the Albanian war erupted Macedonia was caught wrong footed and on the back foot-as the NLA conducted a number of ambushes, attacks and extending its control over a sizable area.

2001 report: “Ukraine is Macedonia’s largest supplier of military equipment and vital to the success of its campaign against Albanian separatists….Under heavy US & NATO pressure, Ukraine agreed to “suspend” its deliveries of military weapons to Macedonia.”

Declassified 1992 and 1993 Australia Foreign Affairs files reveal the US deliberately sabotaged Macedonia’s international recognition in favour of Greece and also dismissed as a “red herring” claims from Albanian nationalists about a lack of “civil rights” in Macedonia which contradict the excuse usually given for the Albanian uprising in 2001 in Macedonia. Is it surprising others-for example Russia-have learned ideas, techniques from the US playbook?

Here is the 1992 Australian diplomatic cable. -note Australia is a staunch ally of the US. 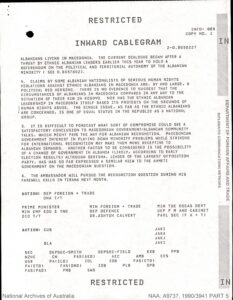 It’s a pity the Ukrainian and Russian people have been caught in between two powerful superpower elephants, the US and Russia.

Russia’s invasion of Ukraine could hurt Macedonia’s interests? We will have to wait and see.

The invasion could open a Pandora’s box in Balkans. Republika Srpska in Bosnia could be emboldened to break away. NATO member Bulgaria will certainly exploit the Russia “scare” in Macedonia to its advantage. It will  label any opposition as Putin’s work. Bulgaria is blocking Macedonia’s entry into the European Union by issuing a set of demands – blackmail, extortion are more accurate descriptions – in which Macedonia must give up its identity and accept a Bulgarian past. With Putin’s was raging in Ukraine, Bulgaria will be milking the fear for all its worth in Brussels and Washington by claiming that Macedonian opposition to Bulgaria’s blackmail has Putin in the background, which is pure nonsense. So called Russian interference in Macedonia has largely been negligible for the simple fact Macedonia since 1991 has been part of the US intelligence’s turf. In 2003 the Macedonian authorities, on Macedonian territory, collaborated with the CIA in the kidnapping and applying rendition to an innocent Lebanese German tourist ,a man called Khaled El Masri, mistaken for a islamic terrorist. He later successfully sued Macedonia in the European Court of Human Rights and paid compensation.