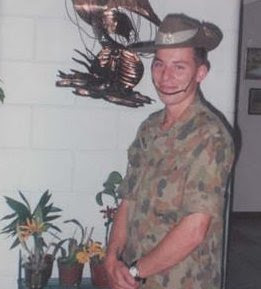 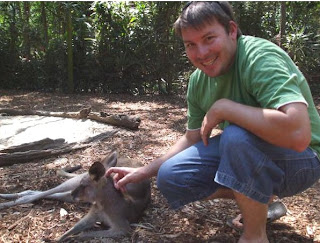 Ken Pedler with Australia’s national symbol and as a digger (K. Pedler photos)
Attention
DVA (Department of Veterans Affairs- Australia)
RWANDA VETERANS TRYING TO RETURN
By Sasha Uzunov
copyright 2008
A former Australian Army corporal who saw action in Rwanda in 1994 is trying to organise a return to that African hell hole to commemorate the 15th anniversary of the Rwandan genocide next year but has received no response from the Prime Minister Kevin Rudd.
Mr Ken Pedler, who now lives in Queensland, served with 2/4 RAR on a United Nations peacekeeping mission in the African nation of Rwanda and later with the famed 6RAR in East Timor in 2000.
“What I am trying to do is get backing for someone to pay flights so the guys and girls who want to come can make it over,” he said.
Mr Pedler said he had contacted the Prime Minister’s Office and RSL and had not received a response.

“There was no media interest from Channel 7 and 9 or ABC TV,” he said.A decade’s long civil war between rival ethnic groups Hutus, the majority and the Tutsi, the minority, led to the genocide of 1 million Rwandans. It was into this hell hole that Australians were sent.

In 1994 Australian Prime Minister Paul Keating and Foreign Minister Gareth Evans as part of United Nations mission deployed a contingent of army medics, who were protected by a company of infantry soldiers from 2/4 RAR, to Rwanda.
Despite the limitations of the UN mandate, Australian peacekeepers were able to do the best job possible in treating the many wounded and suffering.
The then UN Secretary-General Kofi Annan said:
“We must never forget our collective failure to protect at least 800,000 defenceless men, women and children who perished in Rwanda.
“Neither the UN Secretariat, nor the Security Council, nor member states in general, nor the international media, paid enough attention to the gathering signs of disaster. Still less did we take timely action.”
—————————————————————————–
Ken Pedler contact details: —email: (kmp95@live.com)
In commemoration of the 15th year of the Rwandan genocide Join us in Rwanda!
‘’Gathering of Forgiveness, A Step to Reconciliation’’
February 10 through 18, 2009 In addition to conferences and field trips, together we will launch a Garden of Forgiveness.
In a period of 100 days in 1994, nearly ONE MILLION innocent women, men and children died.
Leaving many widowed and children orphaned and traumatized. It is our hope to continue bringing healing to this nation by creating a ‘Culture of Forgiveness’ and encouraging and empowering leaders.
Details:
http://www.mizerochildren.org/
Gathering of Forgiveness, Feb. 10 – 18, 2009, Itinerary, Cost & other Details We hope that you will consider joining us on this journey! Gathering: Arrival Tues., FEBRUARY 10 and depart Wed. FEBRUARY 18, 2009Conference: Evening of the 10th through evening of the 13th : • Variety of speakers (Africa, USA, Canada, Australia and Europe) to address our theme of forgiveness and reconciliation. • Perpetrators and survivors of genocide that have repented and reconciled will share their experiences.Field trips : will include trips within Rwanda and to nearby Burundi and the Democratic Republic of Congo.
—————————————————————————–
RELATED STORY – Australian Peacekeeper & Peacemaker Veterans’ Association
president@peacekeepers.asn.au
http://www.peacekeepers.asn.au/
This Sunday 14 September marks Australian Peacekeepers Day.
The hundreds of Australians involved in peace operations worldwide and their families will take a moment to reflect on the contribution they are making to restore order and security to communities affected by war and civil unrest and to remember those who have given their lives for that cause.
Since 1947 there have been more than 66,000 Australians engaged in peacekeeping globally from the Middle East and Sudan to places closer to home such as East Timor.
Australia’s excellent reputation and 61 year history in peacekeeping is a proud one but tends to go largely unreported. The Australian Peacekeeping Memorial Committee is working hard to change this and give peacekeepers better recognition through the dedication of their own Peacekeeping Memorial in Canberra.
A site has been approved for the Australian Peacekeeping Memorial alongside the various memorials along Anzac Parade in Canberra and the design competition is in its final stages with the final concept due to be unveiled next month.
“This Memorial will commemorate and celebrate the past and present role of Australian Peacekeeping around the globe, and the very real contribution by Australian military and police in the often dangerous situations they face. We encourage all Australians to commend and support the service of our Australian police, military and civilian peacekeepers” said Peacekeeping Memorial Project Chairman Major General (Ret’d), Tim Ford AO.
“The Peacekeeping Memorial will provide a national focus for gathering and commemorating the service of our peacekeepers on days such as Australian Peacekeepers Day and we look forward to providing these brave men and women a fitting monument to their service.
The Memorial seeks to show that Australia’s contribution to peacekeeping exemplifies Australian values of openness, fairness, egalitarianism, mateship, initiative, and respect for diversity and social justice for all people.
———————————————————–
RWANDA LINKS:
http://www.defence.gov.au/news/armynews/editions/1105/features/feature02.htm
http://www.awm.gov.au/wartime/27/rwanda.asp
Reflections on Rwanda
http://www.anzacday.org.au/history/peacekeeping/anecdotes/rwanda01.html
http://www.peacekeepers.asn.au/books.htm
The Long Road to Rwanda – Simon Kelly (book)
Gareth Evans, Paul Keating, peacekeeping, Rwanda, UN