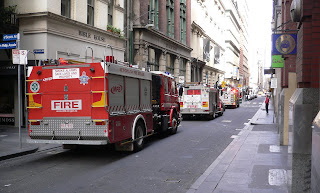 The Metropolitan Fire Brigade (MFB) has today hosed down concerns from some of Melbourne’s Central Business District (CBD) traders by saying that an alleged increase in fire call outs were not due to training runs but were the real thing.

Three CDB traders, who did not want to reveal their full details and business names for fear of being branded paranoid, had over a two month period noted an alleged “increase” in the number of fire trucks driving along Swanston Street.

Mr Andrew Zammit, MFB spokesman, said the organisation responded to genuine calls and did not undertake training runs in the city.

“We’re always on high alert and our focus is to get out of the door quickly and respond to an emergency,” he said.

Mandy, who works in a clothing store; Ken, who runs a restaurant; and Hari, who works in a convenience store, said they were concerned at the frequency of the fire trucks with sirens blaring.

“My real worry is that maybe the MFB is undertaking training runs to get us used to the regular sight of fire trucks whizzing down the city and making all sorts of noise,” Mandy said.

“Are we being prepared or inoculated against a possible disaster or terror attack?” Ken asked.

“I would suggest that any CBD trader organization send us on official letterhead their concerns. The MFB Chief Executive Officer and I will address it.

“They should tell me the times of all the call outs they have noted. I’m a hundred percent confident that I can answer any query relating to these call outs. They can even access Freedom of Information if they want to,” Mr Zammit said.

On Tuesday (yesterday) panic erupted in Melbourne when 3,000 shoppers had to flee the Myer department store building which was on fire but the MFB reacted immediately.

Ironically, a media query was sent to MFB on Monday, a day before the Myer building fire.

Over a two month period (July-August), anecdotal evidence comes from CBD traders that there has been an alleged ‘increase’ in the number of fire brigade trucks/appliances driving along Swanston Street with sirens blaring.

1. Are some of these call outs simply training or exercise runs, used to test the efficiency of response time of emergency teams to a fire or other disaster?

2. Is this part of a plan to get CBD dwellers, visitors, traders used to seeing and hearing fire trucks driving by on a regular basis in case of a major disaster or terrorist attack without creating undue panic?

3. Has the MFB been placed on a high state of alert recently by the authorities?