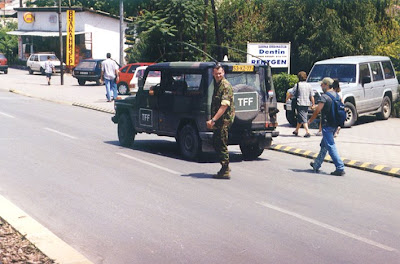 One of the Dutch soldiers who saved me from a beating in Skopje, Macedonia

Balkan flashback–Australian journalist reveals:
THE DAY DUTCH SOLDIERS SAVED ME
By Sasha Uzunov
Last week the Australian government warned that Australian journalists should leave Afghanistan because they were being targeted by the Taliban. But since when have journalists ever been safe in an area of conflict?
I owe a big favour to our Dutch military ally in Afghanistan!
On 3 July 2002, a day before American Independence Day, I was set upon by an angry mob of ethnic Albanian merchants who were protesting against the Macedonian government closing down Bit Pazar market in Skopje, the capital of Macedonia.
In 2001 there was a short lived war–an ethnic Albanian insurgency in Western Macedonia as a spillover from the 1999 Kosovo conflict. A year later inter-ethnic tension was still running high.
As a freelance photo-journalist working for western agencies, I was photographing the demonstrators, who were putting up barricades and blocking traffic, including three NATO buses containing Greek soldiers bound for Kosovo.
About 10 or so demonstrators came running towards me and demanded my camera. A man with a mobile phone was giving orders to the others to attack me.
One man grabbed me by the shirt and starting pulling me towards the ground, whilst another tried to take my camera. I would have been in for a severe beating or worse.
Four Macedonian Police officers stood nearby and watched the whole incident and didn’t intervene to help me. Luckily for me there where two Dutch NATO military observers close by and as I struggled free from my attackers, I ran like lightening towards them. The protestors chasing me then backed off and disappeared.
Seeing those two Dutch soldiers was a godsend. I could not thank them enough. To this day I still do not know the names of these two good Samaritans.
I know of journalists who have a negative attitude towards the military but when they get in a tight squeeze all of a sudden become friendly towards them.
(end)

http://www.smh.com.au/news/world/journalists-warned-to-get-out-of-afghanistan/2008/09/08/1220857456607.html
Journalists warned to get out of Afghanistan
September 9, 2008
AUSTRALIAN journalists in Afghanistan have been targeted by terrorists and were warned yesterday by the Federal Government to consider leaving the country.

0 Replies to “THE DAY DUTCH SOLDIERS SAVED ME”