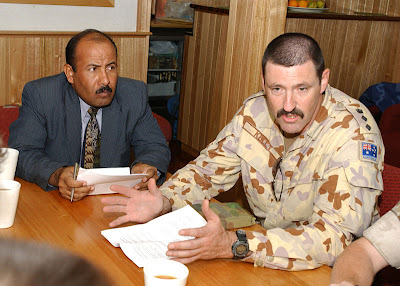 Colonel Iron Mike Kelly, Australian Army Lawyer then serving in Iraq, talked about his heroics in Africa but ignores Timor hero living in his electorate. ADF photo.
IRON MIKE’S RUMBLE IN THE JUNGLE
When we get to Africa we gonna get it on, ’cause we don’t get along!
Float Like a Butterfly and Sting Like a Bee
Army Lawyer fights off Somali Warlord
IRON MIKE KELLY IGNORES HERO BUT TALKS ABOUT HIS OWN HEROICS
By Sasha Uzunov
Colonel “Iron Mike” Kelly, the Federal MP for Eden-Monaro, and the Parliamentary Secretary for Defence Support in the Rudd Goverment, is ignoring an Australian Army hero living in his electorate who was involved in combat in East Timor.
In what would make Boxing legend Muhammed Ali proud, the good Colonel, an Army Lawyer turned politician, had his own rumble in the jungle with a Somali warlord.
But the Colonel, in the lead up to his election to Federal Parliament last year, has regaled the media with his own heroics as an Army Legal Officer in Somalia in 1993.
And it sounds something straight out of the hit US TV shows JAG or maybe CSI: New York!
Iron Mike Kelly told the Canberra Times newspaper about his struggle with a Somali warlord:
“The court erupted into mayhem as a berserk Gutaale launched at his nemesis and the pair became embroiled in a life or death wrestling match.
“As storm clouds brewed in the night sky, the melee spilled out into the street, where a large crowd of Gutaale’s cronies, keeping an eye of the proceedings, had gathered.
“The two Australians present fixed bayonets to attempt to restore order.
Dr Kelly described the scene vividly.
“Gutaale basically had a death grip on me and my shirt and webbing were getting torn.
“The crowd was getting worked up and it was raining heavily it was like a scene from a bad movie,” he said.
“He had a good grip on me and it was all looking pretty untidy.”
“With the crowd set to riot, the two Australians were assisted when a group of engineers arrived.
“A bruised Gutaale was handcuffed and Major Kelly personally wrestled him along the muddy roadway to his place of execution. The murderer was handed over to the police.
“Within minutes he was dead.”
(source: Somalia to Eden-Monaro: How Mike Kelly fought a murderous warlord all the way to a firing squad by MICK TOAL 20/10/2007 )
http://www.canberratimes.com.au/news/local/news/general/somalia-to-edenmonaro-how-mike-kelly-fought-a-murderous-warlord-all-the-way-to-a-firing-squad/238656.aspx 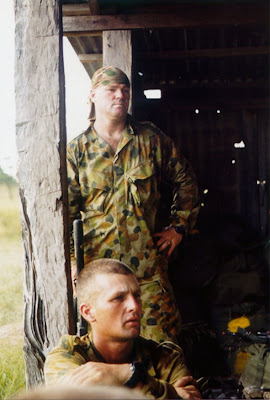 He was nominated for a Distinguished Service Medal (DSM) for brave leadership under fire but for reasons unknown the award was never made. Independently of the Australian honors and awards system, Corporal Campbell received a United Nations Commanders Commendation Certificate.

Corporal Campbell had also served in the elite SASR before going to East Timor.

Colonel Kelly, who in his role as Parliamentary Secretary for Defence Support, oversees Defence honors and awards, has in the past ruled out re-opening the file on Corporal Campbell’s DSM nomination.
(end)
Bambi, Defence Department, East Timor, Kevin Campbell, Mike Kelly, Somalia

0 Replies to “MIKE KELLY’S RUMBLE IN THE JUNGLE”