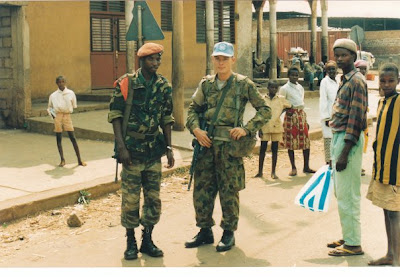 Keating was eager to send Australian troops to Rwanda, Africa in 1994
but there was no criticism of Gallipoli back then. (Photo courtesy of Ken Pedler)
KEATING’S SHORT MEMORY
By Sasha Uzunov

Paul John Keating, Australia’s Prime Minister from 1991-96, has been at it again. –letting go with comments that would guarantee media exposure. His latest outburst is about the relevance of visiting Gallipoli.

Funny that during Keating’s Prime Ministership his criticism of Gallipoli was mute. But then again during his time in office he sent Australian troops to Somalia, Cambodia and Rwanda in an attempt to act tough on the international stage.

Since leaving politics not once has he expressed any concern for the soldiers he sent into combat. We know that the Rwanda mission in 1994 was flawed from the beginning with inadequate rules of engagement for our troops caught in genocide between two rival ethnic groups in the heart of Africa. No wonder that some who returned from that hell hole suffer from PTSD, being forced to witness massacres.

Nor could we forget Keating’s moving comments about the Unknown Soldier, brought back from the WWI French battlefield to finally rest in Canberra, in 1993:

Nor can we forget Keating’s cynical political use of the Kokoda Track battle from World War II. However, Keating did lose a relative during WWII, as did a large number of Australians.

Keating, who was born in 1944, did not volunteer to fight in Vietnam but using the Anzac legend or that matter sending others into combat for political gain is nothing new. The unfortunate thing is that there are many in the Australian media who refuse to scrutinise our leaders and experts.

They are in effect letting these people off the hook. This will continue because some commentators see themselves as future government advisors or spin doctors on big fat salaries. It is not in their interest to rock the boat.