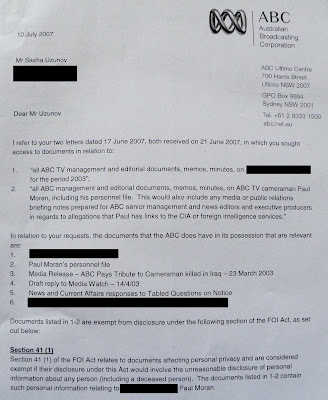 A JAMES BOND OTHER LIFE

There are moves to have ex-politicians banned from sitting on the board of the ABC, in an attempt to de-politicise and maintain the independence and integrity of Australia’s public broadcaster.

But the ABC has some internal unfinished business it needs to take care of: an issue it has deliberately swept under the carpet for the past five years in the hope that the public will forget the life and death of controversial ABC TV cameraman Paul Moran.

Last year the ABC rejected a Freedom of Information request for access to the personnel file of the late Paul Moran, a cameraman accused of having links to the United States Central Intelligence Agency.

Moran, 39, was killed on March 22, 2003 by a car bomb while covering the war in Northern Iraq for ABC TV. He was an Adelaide-raised freelance cameraman who worked on and off for the ABC as well as US public relations firm Rendon, which had ties to the CIA and the Bush Administration.

Walkely Award winning Australian journalist, Mr Colin James, of the Adelaide Advertiser newspaper, was the first to break the story about Moran’s shadowy past when he attended Moran’s wake in Adelaide.

He talked to relatives who revealed that Moran had a James Bond other life.

“For a freelance cameraman, Moran sure had some incredible access to US State Department officials in Washington,” Mr James said. “How many freelancers get to play games of social tennis with US diplomats?”

Moran had worked for Rendon for over a decade in places like the Middle East and Kosovo, pushing US government spin while doing freelance work for the ABC TV as a combat cameraman.

On November 17, 2005 prominent American journalist, academic and former US Navy intelligence analyst James Bamford wrote in the influential American magazine Rolling Stone a detailed account of Moran’s work with Rendon and its link to the CIA and its selling of the Iraq War to the US public.

The controversy surrounding Moran stems from his exclusive story about an Iraqi defector who had knowledge about Saddam’s weapons of mass destruction program. A Rendon colleague gave him the scoop which turned out to be false, but was a pretext for the US invasion of Iraq, according to Bamford.

The Australian cameraman also helped to set up a television station for the Iraqi National Congress (INC). The INC was established by the US as an opposition group to the Saddam Hussein regime.

In January 2003 I was hired as a photographer for Canadian war reporter Scott Taylor (http://www.espritdecorps.ca/) and we tracked down Mr Gaan Latis, who was recruited by the INC to become a member of a US trained exile army à la Bay of Pigs.

US advisors had set up a training camp at the Taszar Army base in Kaposvar, Hungary. Each new recruit was paid US$3,000. But the plan failed when there were not enough suitable candidates. We went to the army base in Kaposvar and were stopped at the front gate and were threatened with having our cameras confiscated.

I had a front page photo of the Taszar base published in Canada’s national newspaper, The Ottawa Citizen (January 24, 2003), and Esprit de Corp Magazine (February 2003) along with Taylor’s revelations of the exile Iraqi Army in training.

For five years I have been following the Moran story and attempted to gain access to information from the ABC.

Ms Joan McKain, the ABC’s FOI Coordinator, in a letter dated July 10, 2007, rejected my request for Moran’s personnel file under Section 41 (1) of the FOI Act.

The Act spells out that any documents affecting personal privacy are considered exempt if their disclosure under this Act would involve the unreasonable disclosure of personal information about any person (including a deceased person).

Mr Uechtritz, in his reply to ABC program Media Watch aired on April 14, 2003, wrote: “The ABC is not in the habit of following up Adelaide Advertiser stories.”

The Media Watch program had chastised the ABC and Uechtritz: “The story was followed up by some parts of the media, but not by the ABC. It should have been.” (Death in Bagdad, April 14, 2003 episode).

The irony of all this is Mr Uechtritz complained to The Age newspaper on June 30, 2003 about freedom of speech after coming under attack from the then Communications Minister, Senator Richard Alston, for alleged biased reporting by the ABC over the Iraq war.

“It is the duty of independent journalists in a robust democracy to question everything, “Mr Uechtritz wrote. “The senator seems to think the media’s duty in time of war is to fall meekly into line with the government of the day.”

But it appears this does not apply to journalists scrutinising Paul Moran!

In 2006 the ABC’s then Managing Director, Mr Russell Balding, was approached and asked if he would launch an internal inquiry into the Moran allegations. Mr Shane Wells, his spokesman, said there would be no comment.

The ABC needs to shake off the public perception that it is a closed society and a law onto itself. Australia’s taxpayers need to have a national public broadcaster with no skeletons still rattling in the closet.

Other On Line Opinion articles by Sasha Uzunov