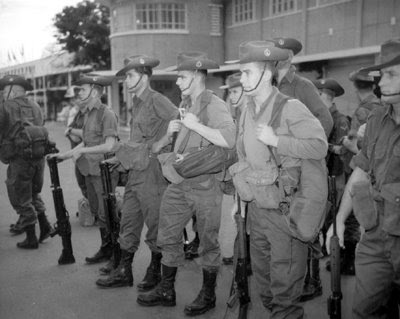 Australia’s Leader on the War on Terror won’t discuss his lack of war service in Vietnam (1962-72)
Still waiting for a reply…after 15 months…
ASIO Spy boss wont reveal why he didn’t volunteer to fight in Vietnam…
WAR ON TERROR LEADER WON’T DISCUSS HIS LACK OF WAR SERVICE
By Sasha Uzunov
Mr Paul O’Sullivan, Director General of Australia’s internal spy agency, ASIO, and one of the Leaders in the War on Terror has refused to respond to questions put to him over a year ago as to why he did not volunteer to fight in Vietnam during the 1960s.
Mr Sullivan, was asked in a letter dated 20 July 2007:
“Mr O’Sullivan, as Director General of ASIO, you are one of the leaders in the War against Terrorism. Looking at your impressive resume in the publication of Who’s Who in Australia, there is no mention of you having served our nation in the military or police or security services but in Foreign Affairs.
“Sir, according to the entry it says you were born in 1948. Could you explain why you did not volunteer to fight in the War against Communism in South Vietnam (1962-72)? You may have missed out on the National Service scheme but could have joined the Australia Regular Army, Navy or Air force.
“I look forward to your response.”
As yet Australia’s Leader on the War of Terror has not been forthcoming about his lack of war service unlike his then boss, Attorney General Phillip Ruddock, who responded to the same questions within a couple of months.
Mr O’Sullivan was born on 3 February 1948 and missed out on the selective National Service Ballot then in operation from 1964-72 for all 20 year old Australian males. However, he could have still joined the Regular Army.
The ASIO boss joined Foreign Affairs in 1971 as a diplomat and eventually ended up a Security Advisor to then Prime Minister John Howard. He became Director General of ASIO on 21 July 2005.
(end)
ASIO, John Howard, Paul O'Sullivan, Vietnam War, War on Terror