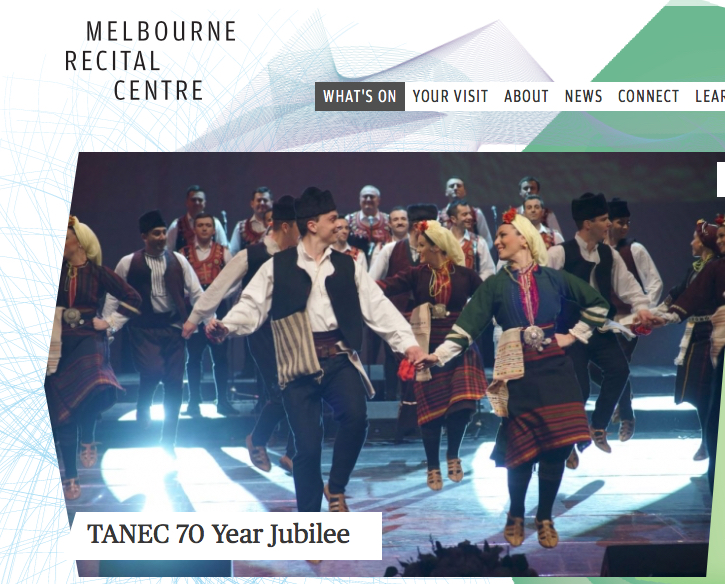 Numbers low for Tanec Melbourne leg.
by Sasha Uzunov
Ms Di Rolle, a media spokeswoman for the Melbourne Recital Centre has confirmed that a planned matinee performance of Tanec was cancelled but the evening session went ahead last Sunday.
Tanec, a Macedonian folkloric group from Macedonia, is on a controversial tour of Australia.
Tanec performed at the Elisabeth Murdoch Hall in the Melbourne Recital Centre, which seats 1,000. Unconfirmed reports put the Sunday evening performance attended by about 700 – which means out of a possible 2,000 patrons over two days, less than half attended – with one session being cancelled.
Ms Rolle said she could not give official figures as that was up to to the client, TOSE: Australian Macedonian Dance Group to supply.
“Hello Sasha, the client cancelled the afternoon show. The evening performance went ahead,” Ms Rolle said.

Macedonian folkloric Ensemble Tanec is on a controversial tour of Australia after its Macedonian prefix was dropped because of the Prespa Agreement signed between Greece and Macedonia.

This has angered local Macedonians who believe Tanec has lost its Macedonian heritage and the tour designed to convince Macedonians to accept name change at the behest of Macedonian Prime Minister Zoran Zaev.

After Melbourne, Tanec will be performing in Canberra, the Australian capital, and Sydney.