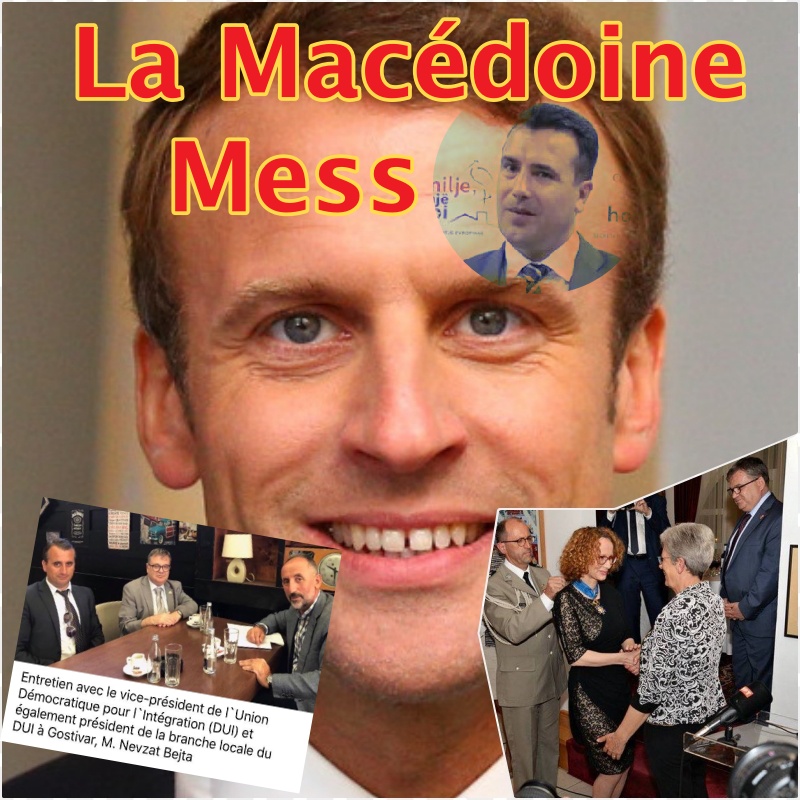 -Confusing signals from Paris or not?

France’s President Emmanuel Macron threw a spanner in the works, so we are led to believe, in Macedonia’s Prime Minister Zoran Zaev’s plans to begin his country’s entry into the European Union.

President Macron blocked Macedonia’s EU ascendancy talks. The Zaev government had talked up its chances of gaining that elusive green light but once again it was not to be. At an EU summit in mid-October, the French President said “NON” to Macedonia – it still had a long way to go in reforming its judicial system and combat endemic corruption. Moreover, Macron argued that the EU needed to do some internal housekeeping first, reforming the structure before it should expand further with new members.

Paris has made no secret – in fact, it shouted it out loud – that it did not want Macedonia nor Albania, an economic basket case state and defacto US protectorate, in the EU in the immediate future. Likewise, EU member the Netherlands did not want Albania in because of its organised crime problem.

Whatever criticism should be levelled at the French and Dutch, it should be aimed at their double game in Macedonia in using Albanian extremists as proxies even though they don’t want Albania in the EU. You might say Macedonia and Albanian are two separate states but the aim in Brussels, the EU HQ, has been to treat both countries as “one packet” in applying for EU membership, rather than individual entries.

Both France and the Netherlands, despite not wanting Albania in the EU in the foreseeable future, have endorsed, supported and in the Netherlands’ case groomed Albanian extremists in Macedonia who regard WWII Albanian Nazi collaborators as heroes underpinned by a neo-fascist ideology of ethnic cleansing of Macedonians and of a racially pure Greater Albania. None of the major Albanian leaders in Macedonia such as Ali Ahmeti and some of his lieutenants such as Artan Grubi and Nevzat Bejta, the man who actually built the Nazi statues, make any secret of their views.

THE GREAT RUSSIA SCARE – a posse of pundits

Then a campaign of vilification against Macron began by Zaev supporters – both domestic and foreign. The gamut of worst-case scenarios thrown up – from the old bogeyman of alleged Russian “interference in Macedonia to Moscow using Serbia as a proxy to destabilise the Balkans to democracy being denied etc etc.

The problem with all of that is it is highly preposterous, to begin with. The greatest threat to Macedonia comes from internal Albanian Neo-Nazism which has been supported by Macron and his detractors.

Macedonia has since its independence from Yugoslavia become a US protectorate which in 1999 was used as a buffer state against the Milosevic regime in Serbia during NATO’s war in Kosovo. In 2001 the US let loose a terror franchise of the Albanian Kosovo Liberation Army (KLA) called the National Liberation Army (NLA) into Macedonia led by Ali Ahmeti who started a war to create a Greater Albanian. When this stalled, as in the Macedonian security forces initially on the backfoot regained the initiative, the demand of a Greater Albanian then was transformed into a demand for “civil rights.”

Without going over old ground, the intention was for Washington to permanently install loyal political clients in Macedonia who could be called to uphold US foreign policy whenever the need arose. The NLA became the basis for the Albanian nationalist party DUI (BDI) led by Ahmeti. Yet it as a party has no grand economic plan for Macedonia. It simply peddles Albanian nationalist demands, glorifies WW2 Albanian Nazi collaborators such as Xhem Hasa Gostivari.

The 2001 war in Macedonia was formally ended with the Ohrid Framework Agreement (OFA) which was brokered by the West. The consequences are Macedonia has been turned into a de facto federation and the Macedonian people having lost their nation-state when there was no justification to do so. The OFA also serves as an alibi for the US’s involvement in starting the war via the NLA in the first place.

In 2004 a planned referendum to stop the re-organisation of Macedonia, that is laying the groundwork for municipalities with a clear Albanian majority, mapping out a possible Albanian republic within Macedonia, was killed by the US offering the bribe of recognising Macedonia under its constitutional name of Republic of Macedonia.

Yet that promise proved to be fickle. In 2018 the US created the Prespa Agreement in order to lower enough Greek opposition to get Macedonia into NATO after Athens had blocked Macedonia’s application to join both NATO and the EU for decades over Macedonia’s name.

The Prespa Agreement forces Macedonia to change its name and erase its identity in order to satisfy Greek blackmail. Likewise, a so-called Goodneighbourly deal with Bulgaria, both a NATO and EU member, was signed in 2017 which is being used as extortion by Bulgaria. That is Macedonia is pressured into changing its identity and history, even accepting Holocaust Denial to Bulgaria’s liking.

All of these developments plus internal Albanian Neo-Nazism pose threats to Macedonia’s very existence not a bogus claim of Russian interference. Both France and its EU allies, including those at loggerheads with French President Macron over blocking Macedonia’s EU entry, are equally to blame.

As a consequence of French opposition, Macedonia has now been parked into the EU minor league after a signing an agreement with Albania and Serbia to form what has been dubbed as a “mini Schengen” – France has come up with certain benchmarks that need to be met before Macedonia is then allowed to proceed to apply for full EU membership. Tour de farce? Time will tell.