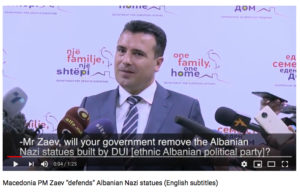 Local council elections in Macedonia are a gauge, a barometer for the subsequent national election. SDSM-theSocial Democrats, did badly but that doesn’t mean it will lose power at the national level when elections do come.

The US and EU have too much at stake in erasing Macedonian identity in order to satisfy Greece and Bulgaria. Macedonia PM Zoran Zaev of the SDSM party has been very useful, nay, crucial in that. He agreed to the so called Goodneighbourly Deal with Bulgaria in 2017 and the Prespa Agreement with Greece in 2018.

SDSM, which claims to be a mainly Macedonian Social Democrats party, is in a coalition government with right wing Albanian nationalist party DUI, which now pretends to be a Greens party even though it has not renounced its Neo Nazi ideology. DUI is loyal to the US, as are the other Albanian politicial parties in Macedonia. So DUI relinquishing power does not pose a problem for the US.

However, if VMRO-DPMNE opposition leader Hristijan Mickovski has been “cleared” by US, that is he is trusted to continue in satisfying US strategic needs, there could be change of power at national level with Zaev no longer useful.

Moreover, we don’t know what Mickovski has signed away, what concessions, he has made to controversial Albanian nationalist leader Ziadin Sela in order to get him on side. Could Mickovski have offered federalisation? Sela in 2012 threatened to burn down Macedonia’s Parliament in and in 2017 was attacked by an angry mob which stormed that Parliament, mainly VMRO-DPMNE supporters.

One thing is for sure, the US is the main player here both in the foreground and background.