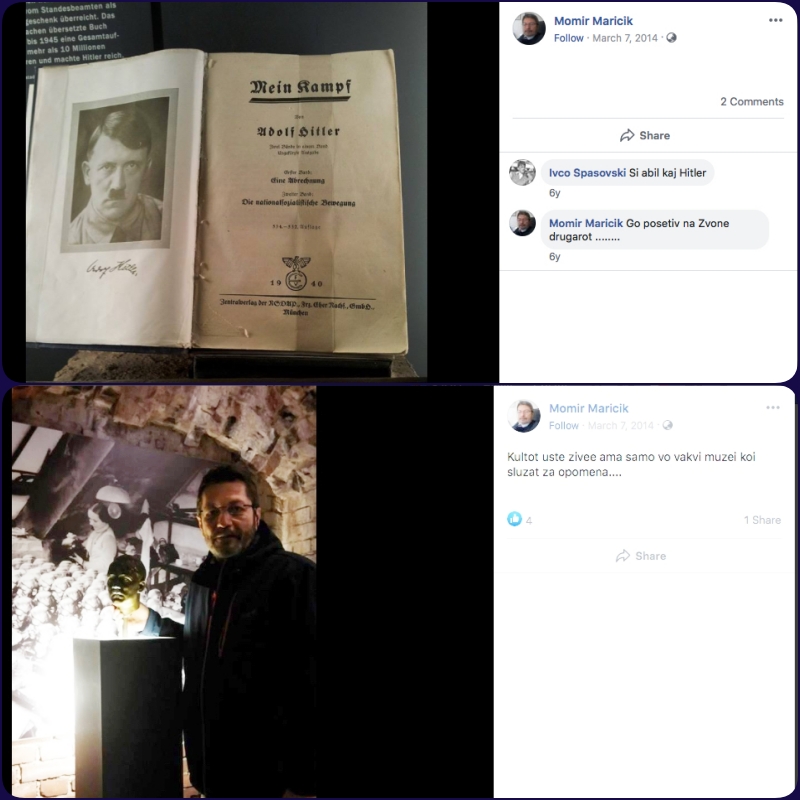 It is believed Momir Maricic visited a museum believed to be in Germany where he was photographed with his arm around a golden bust of Adolf Hitler. The caption written in Macedonian (latin script) to the photo reads: “the cult [of Hitler] still lives only in these museums as reminders [to history].”

Under section 130 of the German criminal code, Nazi glorification and Nazi statues are banned. Nazi memorabilia can only be displayed in a museum explaining historical or past events.

Momir Maricic is a leading public prosecutor and the father of Macedonia’s new Justice Minister Bojan Maricic and has a fascination for Adolf Hitler memorabilia. Bojan Maricic is a cabinet minister in the Zaev coalition government in Macedonia, which includes right-wing AlbanianNeo-Nazii party DUI, of which Ali Ahmeti is the leader. Other prominent DUI members include Bujar Osmani who is Macedonia’s Foreign Minister; Artan Grubi the First Deputy Prime Minister, and Nevzat Bejta who has built statues to WW2 Albanian Nazi collaborators in Macedonia, Xhem Hasa Gostivari and Aqif Krosi Recani.

1. What his ethnic background was – Croat, Serb or Montenegrin.

4. What his role was in investigating the riot in the Macedonian parliament on 27 April 2017

5. Could he provide more details about his visit to a Adolf Hitler statue/bust in a museum believed to be in Germany. Momir Maricic did not respond to the questions and subsequently blocked access to him via social media. His son Bojan Maricic was contacted by telephone and he too refused to respond.