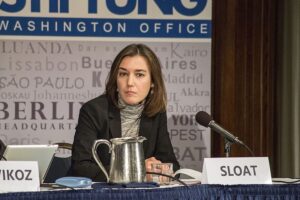 US President-elect Joe Biden has deliberately signalled an anti-Macedonian thrust in his foreign policy by appointing to his National Security Council Dr Amanda Sloat , the woman responsible for drafting the Prespa Agreement which changed Macedonia’s name and erased its identity to satisfy Greek demands.

Dr Sloat will be looking after European affairs. 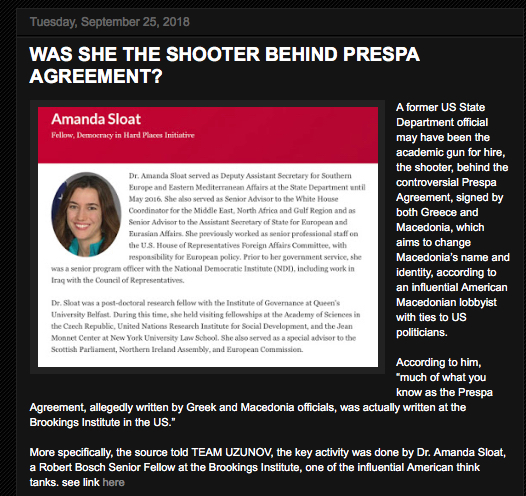 She was contacted numerous times back in 2018 for comment when the story broke about her involvement with the Prespa Agreement but refused to respond. Nearly a year later a terse response came from the Brookings Institute, the US strategic think tank that employed her at the time, denying her involvement. Yet it didn’t come from her directly. Nor was it addressed to my original questions.

The “North Macedonia name deal” signed by Greece and Macedonia on 17 June 2018 – in reality, formulated by the US despite the play-acting – is an attempt to erase Macedonian identity off the face of the earth.

Putting aside the Kabuki theatre/pantomime in Athens, Greece loses nothing in the deal; in fact, makes no concessions but Macedonia loses: the right to its own history, giving up its concern for ethnic Macedonians in Greece who are denied their rights; and above all giving up its sovereignty by allowing Greece extraordinary powers to prosecute those who might be accused of “anti-Hellenic” rhetoric, something unheard of. But above all, it was forced to change its name. Greece spent nearly 3 decades blocking Macedonia from NATO and EU membership over its name.

What underpins the agreement is US foreign policy and geo-strategic needs – that is to put the Balkans finally to bed under US hegemony. Macedonian identity poses a “problem” for Washington – especially to its NATO allies Greece, Bulgaria and Albania. Therefore the path of least resistance is to bully Macedonia.

To highlight the hypocrisy there is the deliberate silence of the US/EU/NATO of World War II Albanian Nazi collaborator statues built recently in Macedonia by “mainstream” ethnic Albanian politicians and former KLA terrorists from the 2001 war in Macedonia. In contrast, Germany – the birthplace of Nazism – has no Nazi statues.

WHAT CAN WE EXPECT FROM DR SLOAT NOW?

The likelihood is she will probably pressure Macedonia’s Prime Minister Zoran Zaev, ironically installed by the US through a so-called Colour Revolution in 2016, to give in to Bulgaria’s demands, in reality, extortion – that is giving up an independent Macedonian identity and history, accepting Bulgarian “roots” and also accepting Bulgaria’s Holocaust Denial of its role in deporting Macedonia’s Jews during WWII to Nazi death camps.

In return, Bulgaria will not block Macedonia from joining the EU. There are US military bases in Bulgaria which are more important to Washington than Macedonian identity is.