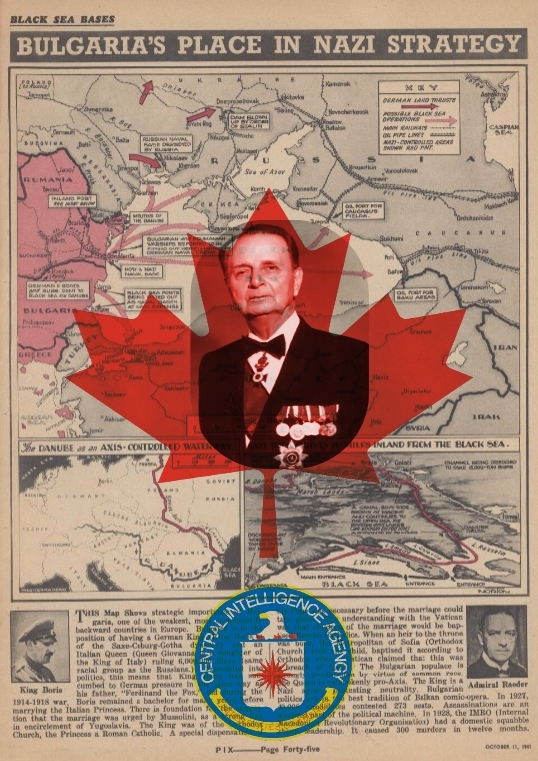 As Bulgaria’s campaign heats up to whitewash its role as a Nazi quisling state during World War II occupying Macedonia and its role in the  Holocaust of Macedonia’s Jews, CIA archives reveal that a high-level Bulgarian Nazi, Ivan Dochev, was allowed to settle in Canada in 1951 despite being initially barred from entering the US.

Dochev worked as an informer for the United States’ Central Intelligence Agency (CIA) and was eventually allowed to move to the US despite contravening that country’s migration laws barring Nazis and their collaborators. He set up a far right-wing emigre organisation called the Bulgarian National Front which reached the corridors of power in the Republican Party of the US in the early 1970s, according to American expert Christopher Simpson. 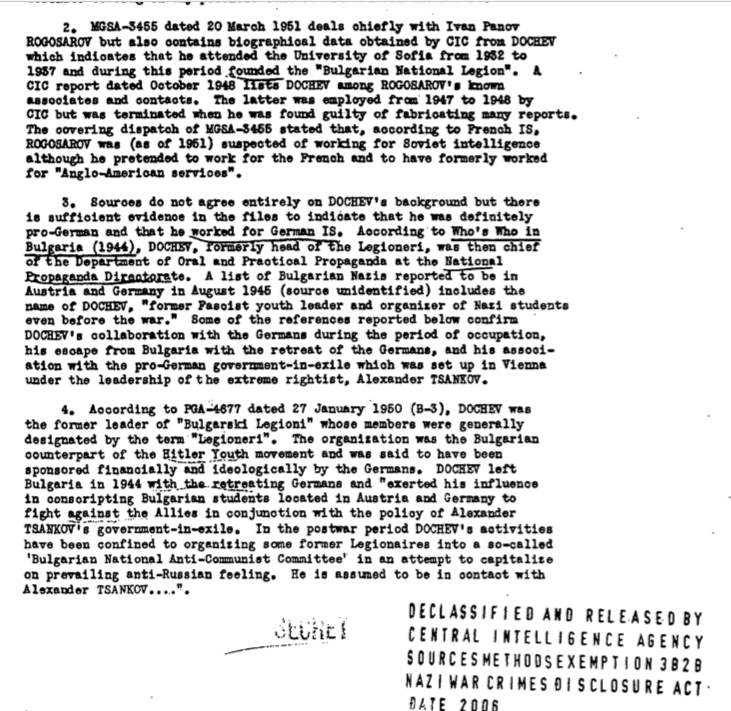 During WWII, Dochev led a Hitler Youth like group called the Legionnaires, fiercely anti-Semitic and pro-German. The CIA files reveal that Dochev worked for Nazi Germany’s intelligence services. Referred by the term “German IS.” After the collapse of the pro-Nazi regime in Bulgaria and the Soviet Army occupation in early September 1944, Dochev fled with the retreating German Army via Macedonia, then still under Nazi occupation. Post-war he spent years hiding out in Austria and Germany when he made contact with US intelligence services. By 1951 he was allowed to settle in Canada despite being rejected entry into the US because of his Nazi past.

With the increasing intensity of the Cold War between the US and the USSR, ex-Nazis and Nazi war criminals such as German Klaus Barbie were used by the US in intelligence operations against the Soviet Bloc. Dochev was eventually allowed to move to the US.

From Christopher Simpson’s 1988 book “Blowback: America’s Recruitment Of Nazis And Its Effects On The Cold War.” link

On 1 March 1941 Bulgaria signed the Tripartite Pact, becoming an ally of Nazi Germany and Fascist Italy – collectively referred to the Axis. As a reward, Bulgaria was allowed to occupy large chunks of Macedonia, then in Yugoslavia and Greece, and Thrace, part of Greece. Bulgaria’s Jewish population was spared but Jews in Macedonia and Thrace were rounded up by Bulgarian occupation forces and sent to Nazi death camps. Macedonians created a partisan resistance movement made up of communists and non-communists to fight Nazi and Bulgarian occupation during WWII.

In a cynical move, Bulgaria deserted the Axis camp and came under Soviet occupation in early September 1944 and switched sides. A pro-Moscow communist regime was set up, lasting till 1990. To this day, Bulgaria refuses to accept its role in the Holocaust and that of “fascist” occupier of Macedonia. Ivan Dochev returned to post-communist Bulgaria to live out his last days but was never prosecuted by the Bulgarian government for being a Bulgarian Nazi.

In an attempt to whitewash its role, European Union member Bulgaria has demanded that Macedonia, which is applying for European Union membership, change its history. Bulgarian demands, tantamount to extortion, include that Macedonians must accept they are Bulgarians, rather than a distinctive nationality and that Bulgaria did not take part in the Holocaust of Macedonia’s Jews during WWII. In return for giving into Bulgaria’s demands, it would unblock Macedonia’s application to join the EU.

In 2018 Macedonia was forced under the controversial Prespa Agreement by Greece to change its name to “North Macedonia” in order to lower enough Greek opposition to Macedonia joining the NATO alliance and the EU.