What will the New Year, 2023, bring for Macedonia? Predicting what will happen in the next 24 hours is a hard task let alone predicting the next 12 months. What is certain, and you can take that to the bank {pardon the line from a Stephen Seagal movie Above the Law), is the United States will be playing a huge role in changing Macedonia’s Constitution on behalf of ally Bulgaria.

Alternate Comms’ last article for 2022 explained in some detail what the US Ambassador Angela Price Aggeler was up to in Macedonia to achieve this task. She has come out all guns a blazing – pardon the American Wild West phrase – over a campaign to combat corruption in Macedonia. It’s a poorly disguised smokescreen to interfere in Macedonia’s internal affairs and place pressure on Macedonian politicians to do as they are told or they could be placed on Washington blacklist of corrupt persons.

This focus on corrupt politicians in Macedonia is highly selective. For example, Ali Ahmeti, a right wing Albanian Neo Nazi terrorist who launched a war in Macedonia in 2001, was transformed into a civilian political leader after the war and even given a parliamentary amnesty. The blunt truth is he was deliberately installed by the US via the 2001 war whilst Washington pretended to be an “honest broker.”

Ahmeti has proven to be 100% loyal US proxy. He has never been investigated for corruption. He was in power with Macedonian Prime Minister Nikola Gruevski for a decade from 2006 to 2016. Gruevski was toppled in a US sponsored Colour Revolution in 2016-17 over “corruption.” But Ahmeti remained like teflon and nothing stuck on him. Hard to believe when Ahmeti wields enormous power.

In the past two decades his political party DUI has been in every coalition government in Macedonia, confirming him as the political kingmaker and having the last word. That’s enormous power for a man who comes from the Albanian minority in Macedonia, which barely numbers 17% of the population but has been fraudulently inflated to 25% via a rigged census last year, which interestingly enough Ahmeti accurately predicted the figure in advance.

The US refuses to condemn let alone comment on Ahmet’s support of right wing Albanian Neo Nazi ideology which includes the veneration of WWII Albanian Nazi quislings Xhem Hasa Gostivari and Aqif Krosi Recani. Post 2006, Nevzat Bejta, a former 2001 war commander and close Ahmeti lieutenant, built statues to Xhem Hasa and Aqif Krosi. It’s outrageous that Nazi collaborators, Albanian in this instance, can be hero worshipped in 21st century Macedonia. But that is the consequence of malign US interference in Macedonia

The US’s ally Bulgaria has demanded certain conditions, in reality a list of blackmail, be met by Macedonia before Bulgaria removes its veto of Macedonia joining the European Union. One of the those key demands is that a Bulgarian minority, barely 3,500, be included in Macedonia’s Constitution this despite the Bulgarian minority and other groups already having guranteed rights under Macedonian and international law. The same cannot be said for ethnic Macedonians in Bulgaria which Bulgaria refuses to recognise. To change Macedonia’s Constitution a two-thirds majority is needed, meaning 80 out 120 Members of Parliament have to vote for the change. As yet there are no 80 MPs in favour, as yet!

Bulgaria is a key US and NATO ally. There are four US military bases in Bulgaria and these, in light of the Russia-Ukraine War, have become even more valuable strategically to Washington. Moreover, France and Germany, key US and NATO ally, have been Bulgaria’s mentor and allowed it protege to get away with outrageous behaviour in promoting Neo Nazism and anti Semitism as well as anti Macedonianism in Macedonia as a price for joining the EU.

What we don’t know is how and when the US will engineer the change to Macedonia’s Constitution. What we can do is take a look at previous moves from the US playbook in Macedonia. In 2017 there was a riot in the Macedonian Parliament, which looked more like a US false flag operation, to create the impression of terrorism and alleged Russian interference in Macedonia. The result of that “riot” was the arrest of opponents who stormed the Parliament in opposition to the Zoran Zaev, a US proxy, taking power. During the subsequent court trials, no evidence was produced by the State Prosecutors of alleged Russian interference.

As a flow on from that riot, in 2018 eight MPs from the VMRO-DPMNE party were threatened with corruption and terrorism charges. As a trade off, they crossed the floor to vote with the Zaev coalition government, installed by the US via the Colour Revolution, to change Macedonia’s Constitution and its name.

We can speculate that the US could in 2023 also engineer a false flag, a bogus terrorism fear, bogus bomb threats and so forth with the intention of implicating opposition MPs to vote in favour of Constitutional change. Or threaten or bribe the main opposition party VMRO-DPMNE, which opposes the changes, to play ball. We will have to wait and see how things turn out in 2023. 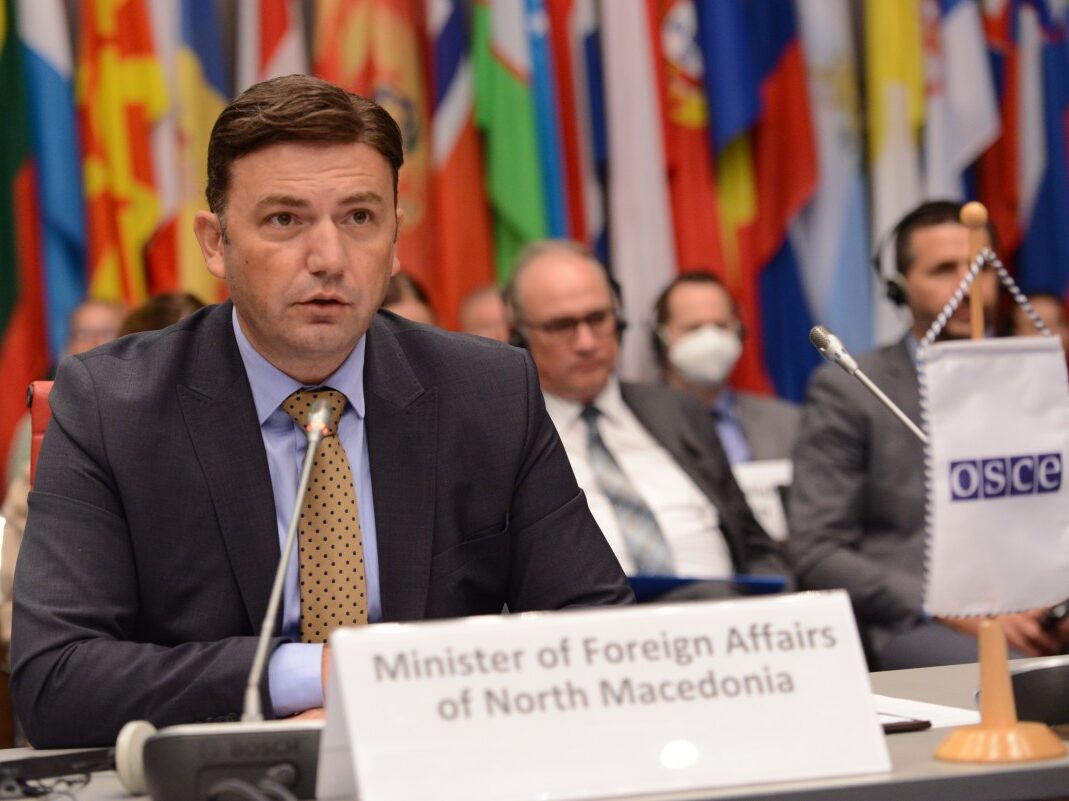 Osmani, like Ahmeti, has been imposed by the US upon Macedonians. It’s a form of psychological warfare. It is there to remind Macedonians in a cruel, humiliating manner that Washington is the boss. DUI openly venerates WWII Albanian Nazi collaborators, Xhem Hasa Gostivari and Aqif Krosi Recani, who murdered Macedonians and Albanians during WWII. A DUI leader Nevzat Bejta has even built statues to these Nazi quislings. The US and West are well aware of these statues but deliberately act as though there is nothing to see here.

Under German law, Section 130 of the Criminal Code, glorifying Nazism and or denying the Holocaust is a criminal offence. British writer and Neo Nazi David Irving has been banned from entering Germany because of this law. But not Osmani or even Ahmeti. That’s because they serve German and US strategic interests, such as changing Macedonia’s name, erasing its identity, to appease US allies Greece and Bulgaria.

Because Albanian Neo Nazi extremists have been able to get away with promoting their vile ideology in Macedonia with Western backing, Bulgaria has been emboldened to let loose anti Semitism, Holocaust Denial and anti Macedonianism in Macedonia all with the blessing of Washginton, Brussels and Berlin.

This now brings us to a gimmick being pushed by Osmani, a VIP card for prominent Macedonians living in the Diaspora which would give them quicker, easier access to Macedonia and certain privileges. The VIP card is said to honour those “distinguished” Macedonians abroad who have assisted Macedonia in some way. But it sounds like a desperate attempt to promote the regime in Macedonia and stop any potential criticism. In all probability many of the “distinguished” Macedonians aren’t even aware they are being manipulated.

It looks like it’s been cooked up by the US Embassy in Macedonia as part of its psychological operations/propaganda to sell to the Macedonian people the US’s foreign policy for Macedonia, which means ultimately erasing Macedonian identity.

It is also a way to whitewash or soften Osmani’s Neo Neo Nazi background by presenting him as a well groomed, well spoken international statesman. But no amount of spin can do that. If the US and the West, including the EU, Germany, Netherlands are serious about packaging Osmani’s image, gimmicks aren’t going to fool anyone. If they re serious they should lean on Osmani and Ahmeti to demolish the WWII Albanian Nazi statues in Macedonia and issue an official statement by DUI condemning WWII Albanian Nazi collaborators, including the quisling militia the Balli Kombetar.