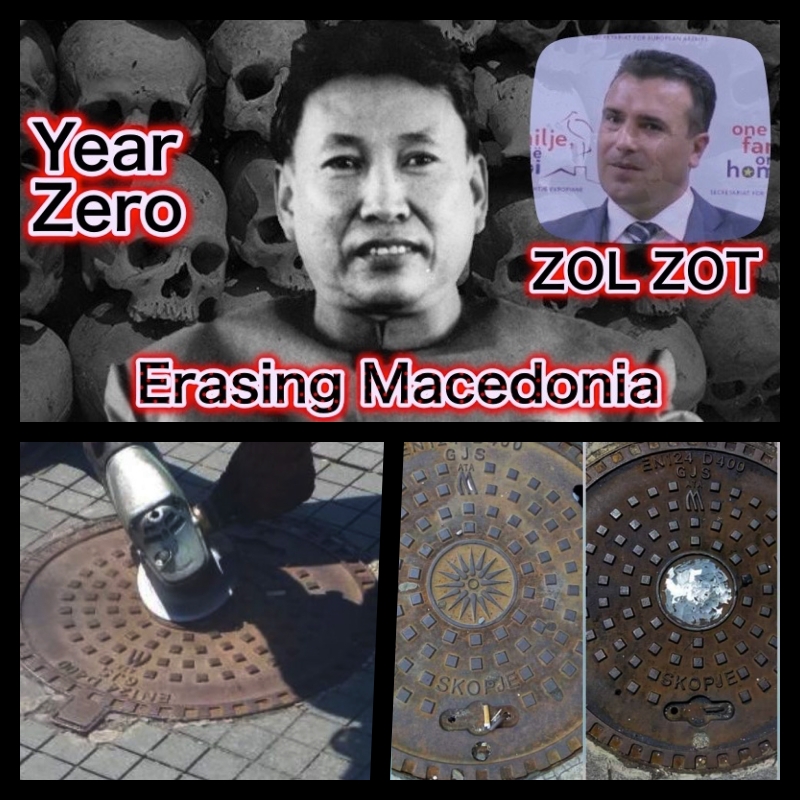 The Agreement signed last year by Macedonia and Greece, but in reality, concocted by the US, forces Macedonia to give up its identity to lower enough Greek opposition to Macedonia joining NATO and the European Union, which Greece has vetoed for decades. Macedonia was forced to change its name to “North Macedonia.”

Any symbols in public places in Macedonia relating to Ancient Macedonia must be removed such as the Vergina (Kutlesh) Sun and statues must have a plaque affixed acknowledging “Ancient Hellenic” heritage.

It’s totally bizarre, Orwellian, and reminds one of crazy Cambodian dictator Pol Pot who came to power in 1975 changing the name of the country to Kampuchea and instigating a 4-year reign of unspeakable terror – as it turned out – in reshaping Cambodia in his view of what its ideal society should be. Millions were murdered in the process in implementing Year Zero – moving urban dwellers back into the countryside.

Zaev’s plan isn’t to move people from the city to country but to erase Macedonian identity of its roots so as to appease Greece, which denies the existence of Macedonians and its role in the cultural genocide of Greece’s ethnic Macedonian population when Macedonia, after 500 years of Ottoman rule, was partitioned by Greece, Serbia, and Bulgaria in 1912-13. 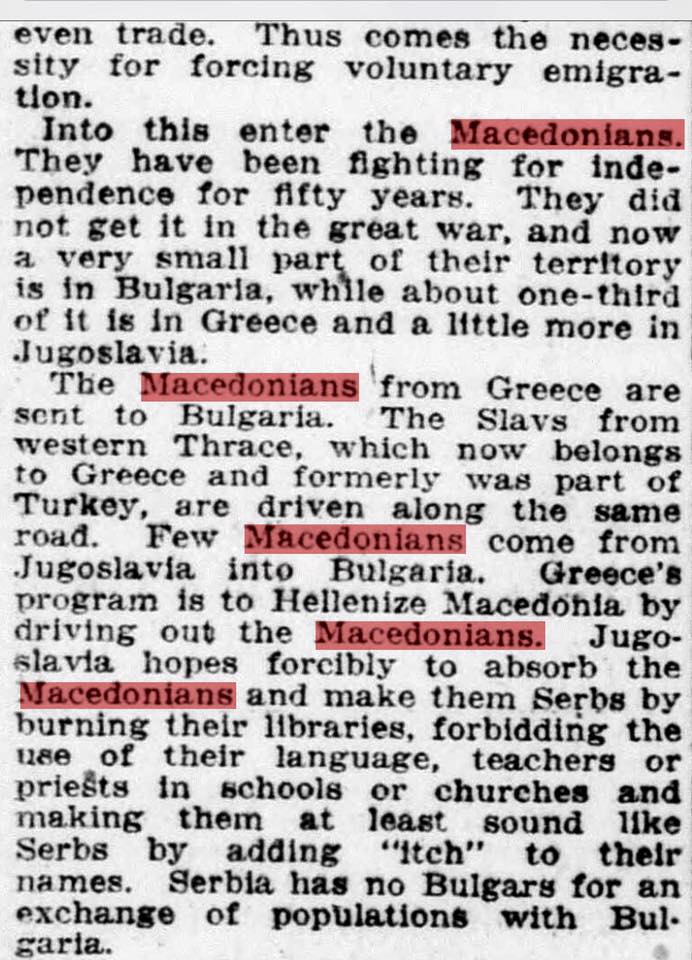 1925 report in the US press about forced Hellenisation of Macedonians as well as massive Balkan population exchanges The Evening Star newspaper, Washington DC, US, August 16, 1925, Page 18 – link

For Greece to claim exclusive ownership of Ancient Macedonia is outrageous when modern Greece’s link to its own Ancient Greek heritage is in question:

“It’s the fault of a German,” Mr. Dimou said about Greek pride in this cause. He was referring to Johann Winckelmann, the 18th-century German art historian whose vision of an ancient Greece “populated by beautiful, tall, blond, wise people, representing perfection,” as Mr. Dimou put it, was in a sense imposed on the country to shape modern Greek identity.

“We used to speak Albanian and call ourselves Romans, but then Winckelmann, Goethe, Victor Hugo, Delacroix, they all told us, ‘No, you are Hellenes, direct descendants of Plato and Socrates,’ and that did it. If a small, poor nation [Greece] has such a burden put on its shoulders, it will never recover.”

Whatever the links are between modern Macedonians and Ancient Macedonians such as Phillip of Macedonia and Alexander the Great are immaterial. And why Greece objects is more to do with covering up its role in the partition and brutal colonisation of Macedonia post-1912 than anything else. The Greek position is the modern-day Macedonians are Slavs who emigrated from an area near present-day Ukraine in the 6th or 7th Century AD and have no connection to the Ancient Macedonians, who Greece claims as being originally Greek.

Dr Florin Curta, an expert on the Slavs, has argued that there was no Slav migration to the Balkans. Yet the Prespa Agreement forces Macedonia to accept a “Slavic past” based on a theory that has never been proved but peddled by Greece and Serbia and Bulgaria for ages and used as justification in brutal assimilation. Greece, Serbia, and Bulgaria’s claim is Macedonians are simply wayward Greeks or Serbs or Bulgars created by Yugoslav communist leader Tito in 1944. A claim that’s ridiculous, to say the least.

Bulgaria, which is also a NATO and EU member, forced upon Macedonia a “Goodneighbourly Agreement” in 2017 which requires Macedonia give up its history and heroes to Bulgaria otherwise Macedonia will be blocked from joining the EU.

A recent example of this was the “joint celebration” of the Ilinden Uprising of 2 August 1903, Macedonia’s attempt to free itself of Ottoman occupation. Bulgaria claims the Uprising as its own, as it claims Macedonians are a variety of Bulgar.

Bulgaria’s Prime Minister Boyko Borissov arrived in Skopje for the official commemorations but stayed away from PM Zaev’s address at Mechkin Kamen (Bear’s Stone) near the town of Krusevo, where the Ilinden Uprising began and led to a 10 day old republic in the Balkans before being brutally crushed by the Ottoman Army and Imperial German assistance.

Zaev’s Mechkin Kamen appearance was met with police threatening to arrest and in some cases arresting anyone who dared turn up at the event and shout their opposition. The whole thing had farce and police state written all over it. There were even some at Mechkin Kamen, regarded as sacred ground in Macedonian history, who shouted: “North Macedonia” – regarded as deliberately insulting.

Borissov and Zaev took time out to unveil a statue to a Bulgarian Army Colonel Kavarnaliev, which had been originally erected by 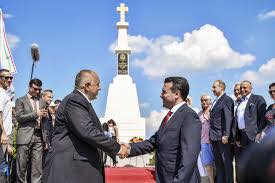 the Bulgars in honour of Karnavalov who had been killed in the Balkan Wars (1912-13), ironically and mentioned above led to the partition and brutal colonisation of Macedonia. The statue was vandalised in the mid-1960s.

A 1926 British diplomatic report says Bulgaria committed atrocities against Macedonians during the 1912-13 Balkan Wars & World War I. So why is there a statue in Macedonia to a Bulgar officer Kavarnaliev who was killed in Balkan Wars? 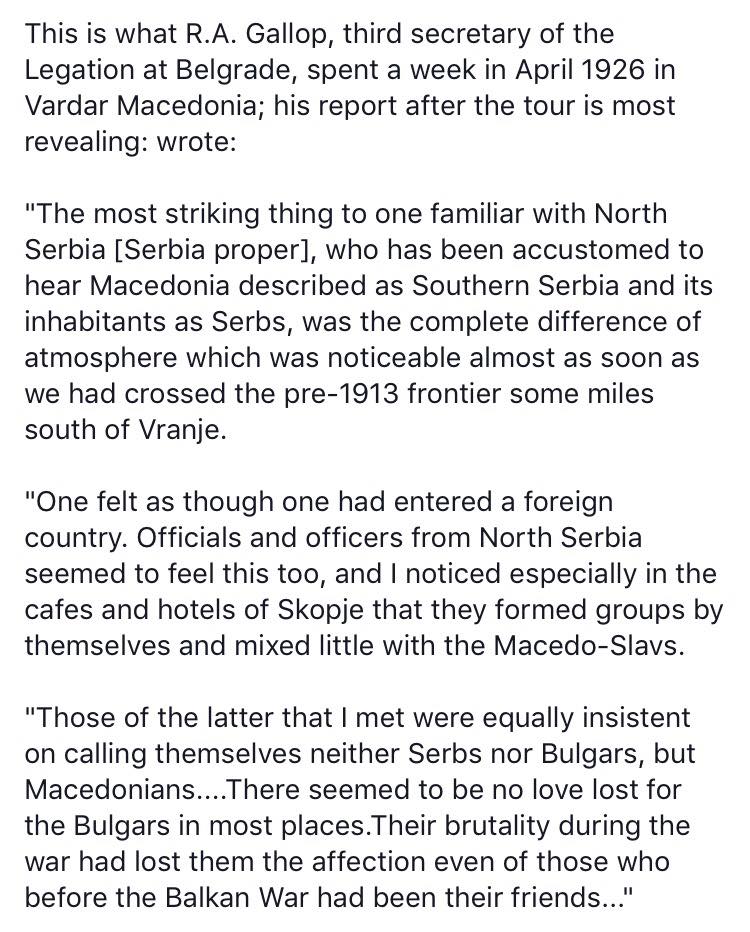 –  It just gets nuttier and nuttier ZORAN ZAEV: does he hate Macedonians, Jews, Roma (Gypsies), Italians and Gays?

Pattern now clearly emerging of Macedonia PM Zoran Zaev as a closet bigot and hater? -First there was “Holocaust Gaffe” in March 2019 – which we reported and now “Gay Gaffe” in which PM Zaev used a nasty slur – peder (Macedonian slang word for faggot) to refer to Bojan Jovanovski aka Boki 13, a male crossdresser, involved in alleged extortion racket which has demanded money from wealthy businessmen facing prosecution for corruption in return for having those charges dropped or at least softened.

Boki 13 has been alleged to have acted as a middleman/woman – pardon the pun – for the head of Macedonia’s Special Prosecution Office (SJO), Katica Janeva, who is said to have used her power to influence investigations. The SJO as an anti corruption unit was much heralded by the EU and US which strongarmed Macedonia into establishing it. Zaev has backed Janeva but of late has begun to distance himself from her. 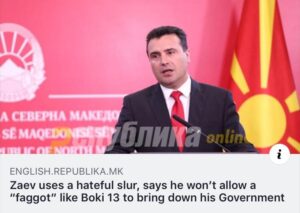 One of the prime movers in exposing this extortion “racket” has been Macedonian journalist Branko Geroski, ironically a long-time supporter of Zaev and who was involved in the 2016 Colour Revolution which brought Zaev to power and enabled name change of Macedonia. Zaev’s attack on Boki 13 also included an indirect threat to Geroski, calling him a vain or haughty journalist. A politically conservative Italian-Slovenian journalist Laris Gaiser has picked up the story and published it and various video clips in an Italian newspaper called La Verita, allegedly showing Boki 13 shaking down on behalf of Janeva a wealthy businessman Orce Kamchev who was facing criminal charges.

To add to the craziness of Macedonia PM Zaev’s behaviour was him being caught out by Russian pranksters claiming to be Ukrainian President Poroshenko and NATO Secretary-General Jen Stoltenberg.

Rashkovski was allegedly caught trying to shakedown a foreign company for a kickback in doing “business” with the Macedonian government. He was recorded as making racist comments.

Playing on the Italian angle, Ana Cupevska, an advisor to Macedonia President Stevo Pendarovski, who was recently elected with support from Zaev and his Albanian far-right nationalist coalition partner, Ali Ahmeti,  claimed there was a “klepto-fascist” – as in far-right – conspiracy involving Italy’s Interior Matteo Minister Salvini, former Italian PM Silvio Berlusconi and Italo-Slovene journalist Laris Gaiser in order to take down the Zaev government, which is seen as being leftist even though there is nothing leftist about it ! Zaev is a wealthy private businessman who supports capitalism.

Yet the hilarity of this charge is both Zaev and Pendarovski’s collaboration with Ahmeti, who leads the Albanian far-right nationalist DUI (BDI) party, which regards World War II Albanian Nazi collaborators such as Xhem Hasa Gostivari as heroes. Gostivari was a proven collaborator of both Fascist Italy and later Nazi Germany.

If all of these allegations of corruption are true, then the Zaev government is a seething hotbed of crooks, racists, haters, greedy malcontents supported by the West. WELCOME TO YEAR ZERO and the crazy new world of ZOL ZOT!