UPDATE: Australia’s 33rd soldier to die in Afghanistan will be remembered as a ”soldier’s soldier”, but his death has raised questions about the operational tempo of the Special Air Services Regiment (SASR) in the conflict. read more….
———–

Some of us warned about the Special Forces burn out back in 2008. 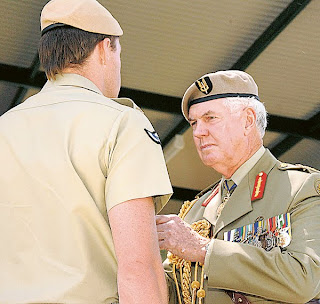 Go to the link for the archived full story…

NELSON-HOWARD MILITARY DOCTRINE: contradiction?To top that off, a legacy of the Nelson-Howard military doctrine has the Special Forces doing most of the fighting, because of the fear of casualties to our regular infantry units. The long term effect could be burn out of our Special Forces. But the irony is if we withdraw our SF units and do not replace them with infantry units, then the pressure on Taliban is eased. It is one contradictory military doctrine, to say the least.SF BURN OUT?“Twice now we have had to deploy special forces in Afghanistan and twice now we have had to withdraw them because they are too tired,” said Neil James, of think tank the Australian Defence Association in October 2006.The highly respected Brigadier Jeff Sengelman DSC CSC, deputy commander of Special Operations, revealed the SAS had faced problems with recruiting and retaining soldiers but put a positive spin by also saying that it did not affect its operational capability.The Australian Defence Force Chief, Air Chief Marshal Angus Houston, was on the money when he said days ago that the increase in Taliban activity against Australian troops in Afghanistan was a last attempt to inflict casualties before the northern winter set in, bringing a close to the traditional war season for another year. But let us take a closer look and read between the lines, if we can.“It was an ambush. My understanding is it was gunfire and rocket-propelled grenades,” Brigadier Robert Dawson, Defence PR, said.Brigadier Dawson said the Taliban were fighting hard to repel Coalition incursions into their heartland areas. “Some of the operations which ISAF are conducting are in areas where Coalition soldiers have not been before,” he said. “I think we can expect more heavy fighting.” (Herald Sun, 4 Sept 2008).Our diggers were operating against the Taliban in the strategic Chora valley north east of Tarin Kowt.