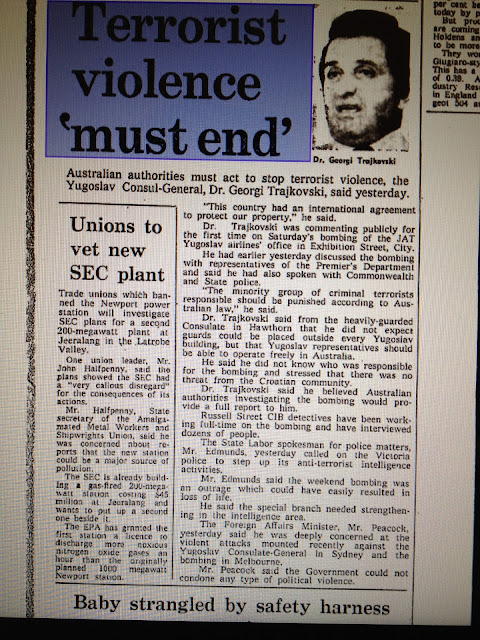 by Sasha Uzunov
In an unusual move the Australian Security Intelligence Organisation (ASIO), the country’s counter-intelligence agency, has withdrawn a de-classified file on a former Yugoslav diplomat believed to be the mastermind behind the 1979-80 Croatian Six set-up, one of Australia’s worst miscarriages of justice.
An earlier TEAM UZUNOV report on 30 April 2012 revealed  – link: http://teamuzunovmedia.blogspot.com.au/2012/04/normal.html
“TEAM UZUNOV has tried to obtain under Australia’s National Archive Act access to the ASIO file of the late Dr Georgi (George) Trajkovski, the Yugoslav Consul General in Melbourne during 1978-79.
“Any federal government documents over 30 years become open to the public. Exemptions can apply on the grounds of national security. However, ASIO has 90 days to respond to any request.”
The request, made on 4 November 2011, took more than six months to process. ASIO agreed to release the 2 volumes on Trajkovski on the 26 June 2012, a day after a formal complaint was lodged with the Commonwealth Ombudsman.
Today, TEAM UZUNOV received a phone call from a National Archives of Australia employee informing that ASIO had withdrawn the file on Trajkovski from public viewing. No reason was given.

The email from the NAA informing of ASIO’s approval to release files on Dr Georgi (George) Trajkovski.
Subject: Your Inquiry – Ref: 11/21566 [SEC=UNCLASSIFIED]Date: Tue, 26 Jun 2012 10:16:56 +1000From: @naa.gov.auTo: sashauzunov@hotmail.com
UNCLASSIFIED
Dear Mr Uzunov,
I am writing to advise you that ASIO have transferred two items into our custody in response to your application for access to records relating to Dr George Trajkovski.
Some material on the files has been withheld from public access in accordance with the exemption categories prescribed by section 33 of theArchives Act 1983.  A statement of reasons outlining the exemptions applied to the files is attached.
Here is a link to the Fact Sheet on the types of information that are commonly exempted from ASIO records –http://www.naa.gov.au/collection/fact-sheets/fs52.aspx. As required by the Archives Act, here is a link to the Fact Sheet outlining your rights of appeal – http://www.naa.gov.au/collection/fact-sheets/fs12.aspx
If you would like to order copies of these records, please fill in and return the attached remittance advice at your earliest convenience.
Please do not hesitate to contact us again if we can be of any further assistance.
Sincerely,

Who Was The Croatian Six Mastermind?

Why did Australia’s domestic spy catchers ASIO keep Prime Minister Malcolm Fraser (1975-83) in the dark over a foreign diplomat’s true identity?
By Sasha Uzunov
July 24, 2011
One of Australia’s worst miscarriages of justice, the Croatian Six terrorism case in 1979-80, may have been perpetrated by a Yugoslav master spy posing as a diplomat and who, would you believe it, not once but twice managed to outsmart Australia’s domestic spy catchers, ASIO, and even shook hands with an unsuspecting Prime Minister, Malcolm Fraser.
Intelligence sources in Washington and in the Republic of Macedonia, one of the successor states of the former communist Federal Yugoslavia, have confirmed that Dr Georgi Trajkovski, the Yugoslav Consul General in Melbourne, Australia during 1978-79 was “hardcore UDBa (Yugoslav intelligence) and a key player in the Croatian Six set up.”
In 1988, Trajkovski with the same modus operandi, the use of agent provocateurs and exaggerated claims of anti-Yugoslav subversion, had a fellow Yugoslav diplomat removed from his post in Melbourne right under the nose of ASIO. This story, told for the very first time, will be detailed in one of my upcoming stories.
In 1991 legendary ABC TV investigative reporter Chris Masters dropped a bombshell on the Four Corners program about The Croatian Six case.
An agent provocateur set up members of Australia’s Croatian community in 1979. Six Croats were imprisoned on false charges of wanting to plant bombs in Sydney.
Masters tracked down the agent provocateur, Vitomir Visimovic, who was an ethnic Serb living in Bosnia but had passed himself off as a Croat.
In fact, ASIO, the Australian Federal Police (successor of the Commonwealth Police) and the infamous and corrupt New South Wales Police Special Branch were all aware that Visimovic was an UDBa operative but suppressed the information during the trial of the Croatian Six. Moreover, the alarming thing was the Australian authorities let the man depart the country. This was during Malcolm Fraser’s tenure as Prime Minister (1975-83).
An UDBa hitman Vinko Sindicic was arrested in Scotland in 1988 after a failed assassination attempt on Croat dissident Nikola Stedul. At Sindicic’s trial it was revealed he “had been in Australia in 1978, working with another Yugoslav agent on a plan to link Croatian political activists with terrorism.”
In all probability co-ordinating with Trajkovski the Croatian Six set up.
The irony is that two months after NSW Police arrested the Croatian suspects in early 1979, Australia’s Prime Minister Malcolm Fraser paid a visit to the Yugoslav Consulate General in Melbourne to offer his condolences at the death of Yugoslav leader Edvard Kardelj, and shook hands with Trajkovski.
We know this because a book “Art Treasures of Yugoslavia” with a special annotation was offered on the web by the prestigious auction house Downies:
“Inside the book is an inlaid letterhead dated 18th April 1979 addressed to the Honourable J.M.Fraser MP, Prime Minister of Australia with typewritten message “With this small token,we wish to express our thanks that you found the time to visit this Consul General (which represents the Yugoslav community) to express your condolences. Please accept this book in appreciation of your thoughtfulness” and hand signed by Consul General Dr Georgi Trajkovski.”
The question remains why did ASIO keep Fraser in the dark over Trajkovski’s true identity?
Trajkovski, an ethnic Macedonian, was regarded as a fanatical Titoist and a specialist on foreign affairs. He authored Diplomatski Protokol, regarded as a text book on international relations in the then Yugoslavia. He passed away in the late 1990s.
Having pulled off the Croatian Six set up in 1979, Trajkovski repeated his shtick in 1988 with the removal of a fellow Yugoslav diplomat right under the nose of ASIO.
BACKGROUND
Yugoslavia was a multi-ethnic communist federation founded in 1945, modelled on the Soviet Union, and fell apart in 1991 into various independent nation states.
Yugoslav intelligence (UDBa) later known as SDB, together with Yugoslav military counter-intelligence (KOS) were largely pre-occupied with silencing dissident Croats, Macedonians, Serbs and Albanians living in Western Europe, North America, Australia and New Zealand, who were agitating for independence from Yugoslavia. UDBa was so ruthless and efficient it at one time rivalled the old Soviet KGB andMossad in liquidating opponents. In Munich, West Germany, a whole section of a cemetery was set-aside for Croats assassinated by UDBa Communist strongman Marshal Josip Broz Tito ruled Yugoslavia until his death in 1980 and during the height of the Cold War managed a great balancing act between East and West. He was seen as an indirect ally of the West after his infamous split with Soviet dictator Josef Stalin in 1949.
A number of Australian left-wing politicians, including Victorian State MP Joan Coxsedge, began to allege that ASIO was turning a blind eye to extremist Croatian elements, who were secretly training on Australian soil to undertake terrorist attacks on Yugoslav territory or upon Yugoslav diplomatic missions in Australia.
In this atmosphere of terrorism mania during the 1970s Australia’s Croat community were looked upon as the bad guy.
We now know that the alleged Croatian terrorism on Australian soil was the work ofUDBa.
One of Australia’s most distinguished investigative reporters and authors, Hamish McDonald of the Sydney Morning Herald newspaper, has told me in a filmed interview that he became interested in the Croatian Six case after following the Balibo Five story, the murder of five Australian based newsmen at the hands of the Indonesian military during its invasion of neighbouring East Timor in 1975.
According to McDonald, vital evidence in proving the innocence of the Croatian Six and Indonesian culpability in the murder of the Balibo Five was suppressed by the Australian federal government on the grounds of “national security.” 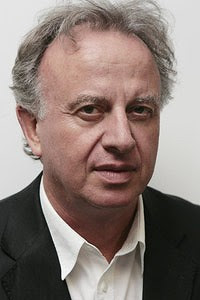 McDonald in the longer e-book version (kindle) of his article writes:

“In a new video, the Macedonian-Australian documentary journalist Sasha Uzunov says he has evidence Sindicic set up the Croatian six conspiracy with the main UDBa official in Australia, Georgi Trajkovski, who operated under diplomatic cover as Yugoslav consul-general in Mel

bourne.”
———————-
Film details
UDBa down under (45 minutes running time) – release date: late 2012 / early 2013.
An Australian a documentary film about the Yugoslav secret police (UDBa) in Australia, with a release date in early 2013. Directed and produced by Sasha Uzunov/Luke Leon Media. Interviewed on camera are Croatian and Macedonian community leaders, ex-Australian state police officers involved in counter-intelligence operations, and former spies both here in Australia and overseas.

he trailer/preview of UDBa down under – Yugoslav spying in Australia.
Uncategorized