Bulgaria has waged an unrelenting campaign to block Macedonia from entering the European Union until it accepts a list of demands, that are nothing more than pure blackmail, extortion. It follows on from the 2018 Prespa Agreement, engineered and imposed by the West, signed by Greece and Macedonia, to change Macedonia’s name, erasing its identity, in return for Greece lifting its three decades long blocking of Macedonia into the EU and the military alliance NATO.

In 2017 Macedonia and Bulgaria signed a bilateral agreement called the Goodneighbourly Deal and subsequently added more demands, which , according to the Canadian-based Macedonian Human Rights Movement International (MHRMI), in effect:

“… include: renouncing the existence of the Macedonian minority in Bulgaria; the Macedonian language, nation, and culture as a whole; adoption of official Bulgarian policy that everyone and everything Macedonian is “really Bulgarian”; the revision of Macedonian history to deny that Bulgaria was an ally of Nazi Germany during WWII, occupied Macedonia, and committed heinous war crimes against Macedonians, including the expulsion of over 7,000 Macedonian Jews to the Treblinka death camp in Poland; and that Bulgaria be referred to as a “liberator” instead of an occupier of Macedonia.”

Simply put outrageous and unjust. France’s President Emmanuel Macron has accepted Bulgaria’s ‘shopping list’ as part of the EU’s requirements for Macedonia’s entry. The Macedonian Prime Minister Dimitar Kovacevski for the moment has baulked at it after remaining silent and claiming he had not seen the French Proposal. Suspicions were aroused of a clever fait accompli taking place. 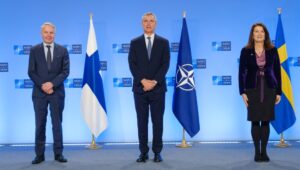 DIPLOMATIC ACE TO PLAY? Macedonia does have a diplomatic ace to play in the Balkan poker game, if it so chooses to take such an audacious move.

Macedonia does have a diplomatic ace to play over Bulgaria’s EU veto and blackmail, but that remains to be seen if it chooses such an audacious plan. In all probability the US State Department won’t allow it. You’ll probably have the US Ambassador to Macedonia opposing it. There are four US military bases in Bulgaria, very valuable strategic pieces of real estate. Observers have seen the blatant hypocrisy of the EU in now wanting Moldova and Ukraine, in reponse to Russia’s war in the Ukraine, into the EU as quickly as possible, jumping the queue in front of Macedonia which has waited for decades.

Be that as it may, let’s put it on the table anyway for the public: There’s no need to accept French President Macron’s proposal, which backs Bulgaria’s blackmail, whatsoever. Macedonia simply blocks Finland and Sweden’s NATO entry until Bulgaria drops its EU veto. That’s a hard but fair bargain. If Turkish President Erdogan can negotiate and squeeze a deal over Finland and Sweden, why cant Macedonia? Finland and Sweden which have remained neutral want to join NATO because of their fear of Russia. Finland shares a border with Russia.

You can donate via Go Fund Me – your donation big or small would be appreciated to keep this blog up and running.- link here