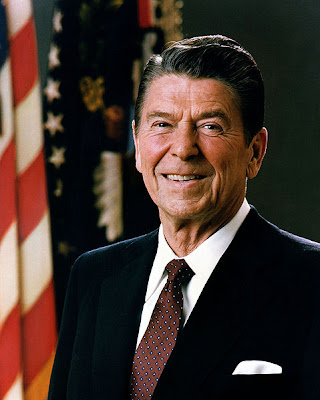 Ronald Reagan, 40th President of the United States of America, 1981-89

Was Reagan’s policy of taking a gun to a gunfight the right one after all?

On Line Opinion: Australia’s e-journal of social and political debate.

As a teenager growing up in 1980s Australia, my generation was constantly bombarded by the media that the world was destined for nuclear holocaust because of the Cold War showdown between the United States and the Soviet Bloc. The then US President Ronald Reagan, a former B-grade Hollywood actor, was painted as a loopy politician who could not differentiate between reality and an old film script.

But with hindsight, was the 40th President of the United States (1981-89) correct in his handling of world events, namely the dismantling of Communism and confronting Middle East and North African “mad dog” leaders?

Teddy Roosevelt, US President from 1901-09, believed in “speak softly and carry a big stick” in foreign policy. But could we summarise Reagan’s doctrine as “speak loudly and carry a medium sized stick?”

Some have credited Reagan with “winning” the Cold War (1947-89) by draining the Soviet Union’s resources with his elaborate but science fiction Strategic Defence Initiative (SDI), commonly known as “Star Wars.” Star Wars would see the US use satellites to block Soviet Nuclear missiles from hitting the US. In order to counter Star Wars the Soviets would have to spend billions in acquiring the technology.

In a 1983 speech with Biblical overtones, Reagan preached:

So, in your discussions of the nuclear freeze proposals, I urge you to beware the temptation of pride – the temptation of blithely declaring yourselves above it all and label both sides equally at fault, to ignore the facts of history and the aggressive impulses of an evil empire, to simply call the arms race a giant misunderstanding and thereby remove yourself from the struggle between right and wrong and good and evil.

Moreover, Reagan supported covert aid to Islamic resistance fighters or Holy War warriors (mujahaddin) in Afghanistan, which was invaded by the Soviets in 1979. The Soviet’s Afghan War lasted nearly a decade and finally ended when the reform minded Mikhail Gorbachev pulled the plug on a disastrous intervention.

The downside of US support to the mujahaddin was the inadvertent growth of Al Qaeda, now fighting a war by terror against Washington. America as well as its two allies, Saudi Arabia and Pakistan, provided money, training and weapons to those groups whom later evolved into Al Qaeda.

Reagan came unto the political scene when an America was perceived as being impotent on the foreign stage, after the debacle of the Vietnam War (1962-72), the 1979 kidnapping of US diplomats in Iran during the Shiite Islamic revolution led by cleric the Ayatollah Khomeini, which overthrew the Shah, and the subsequent but failed US military attempt to save the diplomats.

To shake off the Vietnam syndrome, Reagan authorised the military invasion of neighbouring Caribbean island of Grenada in October 1983 to overthrow a ‘Marxist’ government aligned with arch nemesis Cuba, an ally of the Soviet Union.

No doubt the former actor would have appreciated how this was reflected in popular culture at the time. In a 1987 war movie, Heartbreak Ridge, Clint Eastwood plays US Marine Gunnery Sergeant Highway, who bemoans the fact he has a 0-1-1 record. That is one draw in Korea and a loss in Vietnam and would want to retire with one victory, Grenada, under his belt.

Days before Grenada, the President’s act tough foreign policy backfired when 241 US Marines were killed by a suicide bomber in Beirut, Lebanon. Despite pledging to stay on, Reagan later withdrew the troops. The spectre of body bags from an earlier Southeast Asian war would have played on his mind.

Pulitzer prize winning American journalist Steve Coll, in his book Ghost Wars, reveals that Ramzi Yousef, an Islamist terrorist, had “come to the conclusion that only extreme acts could change the minds of people and the policies of nations. He cited as one example the suicide bombing of the US Marine barracks in Lebanon.”

But behind the sledgehammer approach, Reagan had a subtle, cunning plan, bordering on the illegal. During his Presidency, the Ayatollah’s Iran and the Soviet Union were regarded as America’s main enemies.

So much so, that this, once again, permeated popular culture of the time. The World Wrestling Federation (WWF), professional wrestling shown on American and international television had an enormous following in the mid 1980s. To reflect the political currents, two bad guy characters appeared: The Iron Sheik and Nikolai “The Bolshevik” Volkov. The Iron Sheik wore traditional Persian pants and shoes and would wave the Iranian flag as he came to the ring. He would shout to the hostile crowd “Iran number one, America, haaak p-too (simulate spitting). “

Volkov would wave the Soviet communist flag of hammer and sickle and then sing the Soviet national anthem. Eventually, both bad guys would get their comeuppance when a “Corporal Kirchner” a Vietnam veteran would defeat them in the wrestling ring during pure ideological theatre.

But Reagan saw through the good guy, bad guy rhetoric. From 1980 to 88, the US gave covert aid to Saddam Hussein’s Iraq as it waged a war with neighbouring Iran. In 1986, the Iran-Contra scandal came to light, when two US officials close to the White House, Lieutenant Colonel Oliver North and Admiral John Poindexter, were caught illegally selling arms to arch enemy Iran and using the proceeds to fund a covert war in central America. However, no direct link was ever established to Reagan and North and Poindexter’s subsequent criminal convictions were later overturned on appeal.

In the current crisis affecting Libya, the dictator Colonel Muammar Qaddafi is ruthlessly trying to put down a popular rebellion. Both the US and its allies have launched air strikes against the Qaddafi regime. At one time the Libyan strongman was a darling of the radical left in the west. But now is seen as a bad guy by these very same elements.

However back in 1986 in response to Libyan sponsored terrorism against US targets, Reagan bombed Qaddafi. Heexplained:

‘Colonel Qaddafi is not only an enemy of the United States, his record of subversion and aggression against the neighboring states in Africa is well documented and well known. There is no security, no safety in the appeasement of evil.

‘This mad dog of the Middle East has a goal of a world revolution… I find he’s not only a barbarian, but he’s flaky.’

Reagan’s doctrine of “talk loudly and carry a medium sized stick” was with hindsight the correct course of action in an imperfect world. Bearing in mind he had to shake off the shackles of Vietnam, avoid nuclear holocaust with the Soviets and navigate unchartered waters to deal with middle-east terrorism.