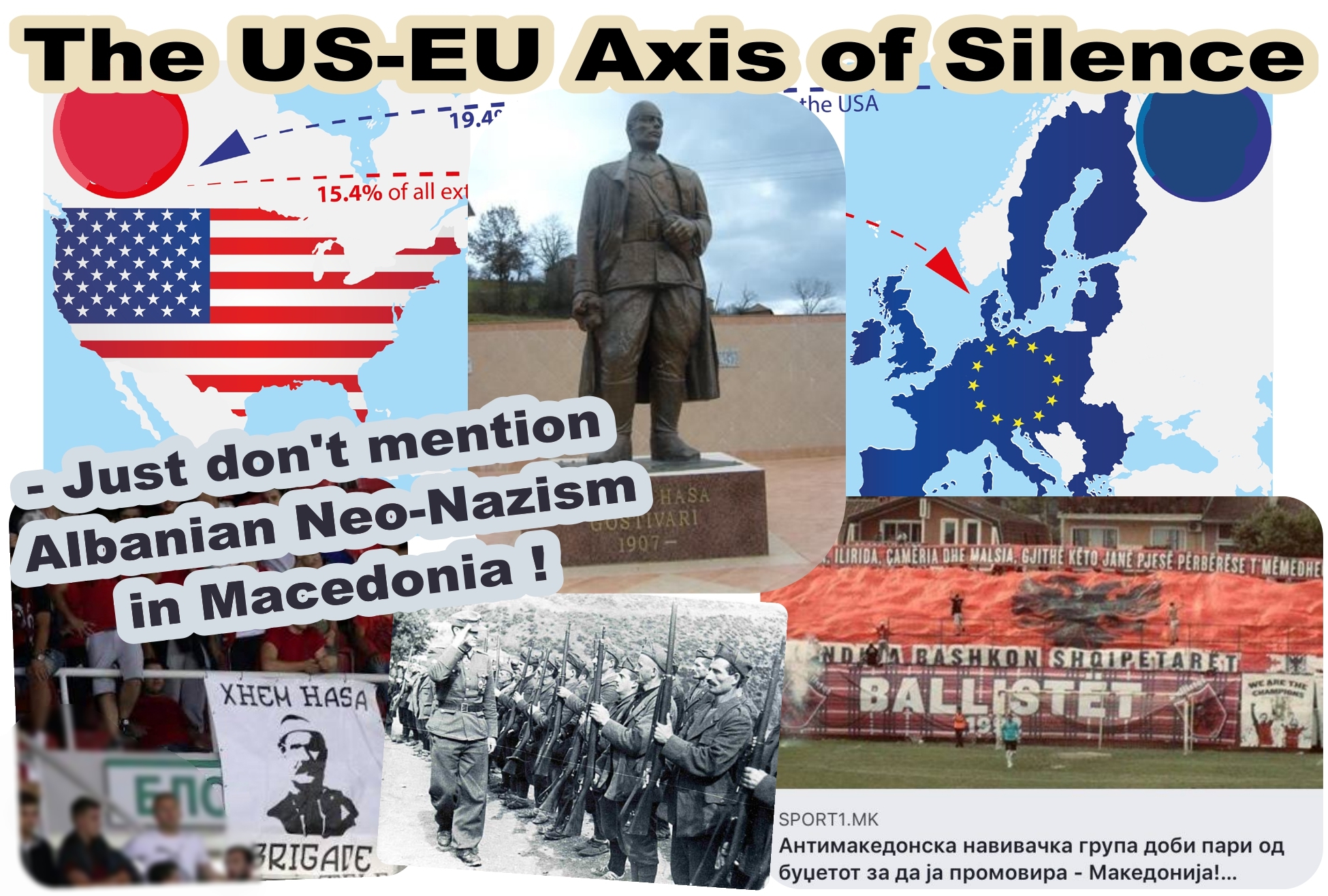 GOLDEN DUI & the Axis of Silence
by Sasha Uzunov
There isn’t that much difference between Nikos Michaloliakos of Greek Neo Nazi Golden Dawn and Ali Ahmeti of Albanian nationalist party in Macedonia, DUI (or BDI). Ahmeti has gone “one better” than Golden Dawn, he’s actually managed to impose World War II Albanian Nazi collaborator statues in Macedonia -post-2001 – without the EU or US batting an eyelid.
Nazi statues are banned in Germany – an EU and NATO member. Yet Ahmeti has managed to get EU tacit approval to build Albanian Nazi statues in Macedonia. That’s an incredible and frightening phenomenon which he has managed to pull off. Something Golden Dawn hasn’t managed to do in Greece – build Greek Nazi collaborator statues.

Greek Neo-Nazi political party Golden Dawn is largely condemned by the mainstream Western media for being extremist. Not so with the Albanian DUI, which has been given a “makeover” by the US and EU.
DUI’s genesis goes back to the Albanian Kosovo Liberation Army’s “Macedonian franchise” led by Ali Ahmeti who started a war in Macedonia in 2001, ostensibly to grab territory and create a Greater Albania. When the US’s link to it was revealed, the narrative changed from Ahmeti being a terrorist thug to human rights activist, even though he was espousing Neo-Nazi ideology, including ethnic cleansing of Macedonians, or “Slavs” as he referred to them. The same terminology used by Greek Golden Dawn for Macedonians.  – – more on Ali Ahmeti and his ideology and Albanian Nazi collaborator statues at this link:
To cover up US complicity in letting loose Ahmeti in Macedonia, the Ohrid Framework Agreement was signed in 2001 which created a defacto Albanian state within Macedonia and concreted a loyal US ally within Macedonia. This meant the Macedonian state would never be able to act independently unless it got approval from the Albanian political bloc – which in reality meant Washington. The end result of this is the controversial Prespa Agreement signed with Greece in 2018 and the constitutional changes that went with it, which in effect wipes out a Macedonian identity and renames Macedonia as North Macedonia to satisfy Greek demands in return for Macedonia being able to overcome a Greek blockade over NATO and EU membership. – more at these links here and here and here
A recent Time magazine article acknowledges the crucial importance of ethnic Albanian backing for the EU (and by extension the US) in Macedonia:
“In Macedonia the name-change is supported by a coalition of a minority of the dominant Slav-Macedonian ethnic group and Macedonia’s ethnic Albanian minority, while it is opposed by the majority of Slav-Macedonians. In other words, the deal pits a coalition of minorities against a majority of the majority. Such an arrangement is bound to reignite ethnic tensions and increase political polarization in Macedonia—the exact opposite of the E.U.’s intention.” – link here
————
PARALLELS TO GOLDEN DAWN 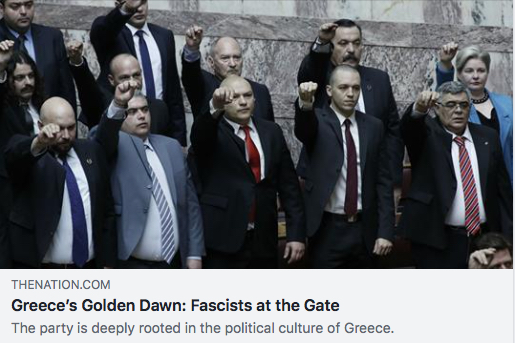 “Golden Dawn was founded by some of the key people who ruled during the 1967-74 junta, and Greek dictator Georgios Papadopoulos, the leader of the colonels who led the 1967 coup, groomed the party’s founder and current leader, Nikos Michaloliakos. Papadopoulos was a Nazi collaborator and served with the German “security battalions” that executed 130,000 Greek civilians during World War II. Papadopoulos was trained by the US Army and recruited by the CIA. Indeed, he was the first CIA asset to govern a European country.” – see link
———————-
The amended Macedonian Constitution now enshrines the Ohrid Framework Agreement, the US’s get of jail card for letting loose the KLA in Macedonia in the 2001 war.
Not surprisingly post 2001 war, former KLA commanders in Macedonia such as Nevzat Bejta, now a loyal Ahmeti lieutenant, felt confident enough, no doubt with tacit US and EU approval or at least a willingness for Washington and Brussels to remain silent, to embark on a program to build – first in 2006 and later in 2013 – statues to notorious World War II Albanian Nazi collaborators such as Xhem Hasa Gostivari, who murdered Macedonians and Albanians opposed to fascism. Such statues don’t represent “peaceful ethnic co-existence.” They are a deliberate message, reminder, to Macedonians of what the majority of the Albanian political bloc in Macedonia really believes in, despite the Western spin and gloss, polish placed on Ahmeti and others such as another DUI party member Bujar Osmani, deputy Prime Minister of Macedonia in the Zaev coalition government. 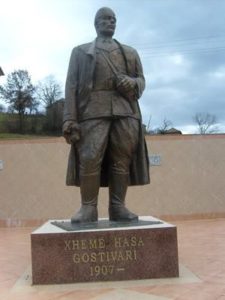 The interesting thing is Nazi statues are banned in Germany. But here in Macedonia, which has a proud history of an anti-Nazi resistance movement, the Partizans, there were now Albanian Nazi collaborator statues.
For more than a decade there has been an incredible silence which even now still continues in and outside of Macedonia. Not one US or EU official is willing to comment or condemn or even explain the unwillingness to comment about World War II Albanian Nazi collaborator statues in Macedonia.
The reason is obvious – if the US and EU need the support of extremists, Albanian Neo-Nazis such Ali Ahmeti, to achieve their objectives in Macedonia what does that tell you about the values espoused by the US and EU? So silence has become a deliberate strategy. 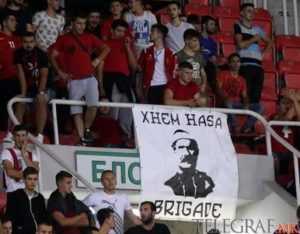 It has now got to a point where flaunting Albanian Neo-Nazi ideology – such as a Greater Albania, veneration of Nazi collaborators – has become commonplace, brazen. A number of Albanian football (soccer) fans in Macedonia calls themselves the Ballists – after the WWII Albanian Nazi quisling militia, the Balli Kombetar. Some even advertise Xhem Hasa Gostivari as a “hero.”
There are no German football fans calling themselves the “Gestapo” or the “SS.”
In essence, those who venerate Nazi collaborators don’t really believe in democracy or human rights or even co-existence, otherwise, why would you regard them as “heroes” to begin with?
The Ballist football supporters even received a Macedonian government grant from the Culture Minister, an Albanian belonging to the Besa party, which was seen as offensive by Macedonians. 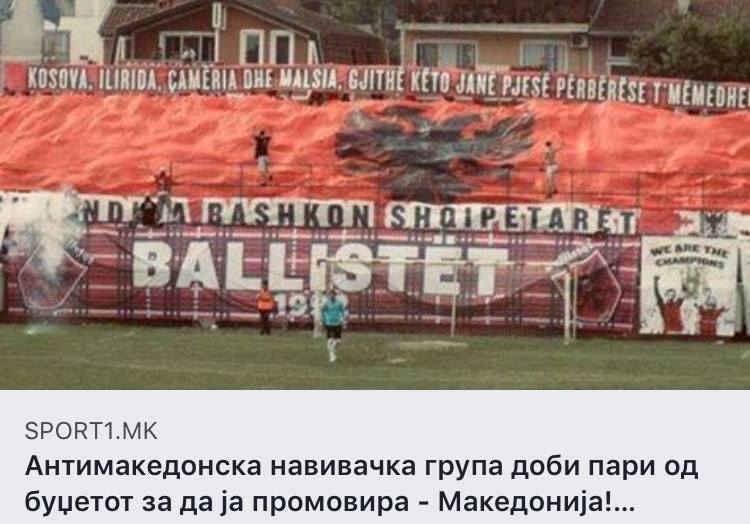 Christopher Simpson, in his book Blowback: America’s Recruitment of Nazis and its Effects on the Cold War, noted that relatively few [Albanian] Jews were captured and killed but “not for lack of trying by the Balli Kombetar organization and the Albanian SS” which had orchestrated “a series of anti-Semitic purges that rounded up about 800 people, the majority of whom were deported and murdered.”
source: Blowback: America’s Recruitment of Nazis and Its Destructive Impact on Our Domestic and Foreign Policy – Christopher Simpson Open Road Media, 2014 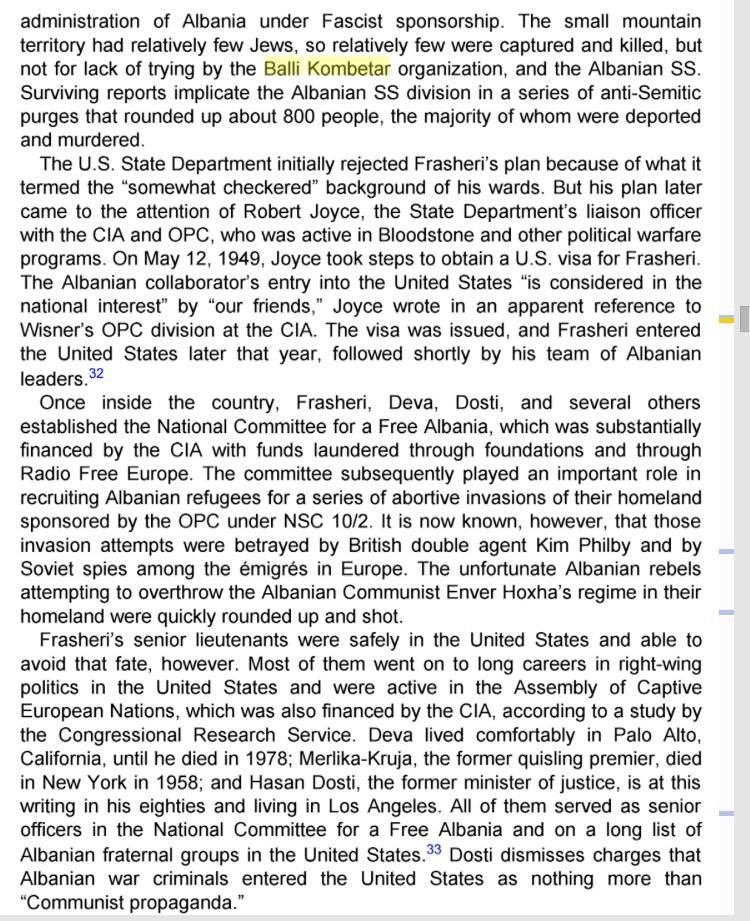 Zhivan Rendev, one of the administrators of a popular Macedonian Social Media page quipped:
“..the silence you have encountered to your questions about the rehabilitation of Nazism by Albanians in Macedonia is very disturbing but in my opinion not unexpected in fact it’s straight out of the western world’s heart and soul. They have done the same thing in the Baltic states and in the Ukraine.” 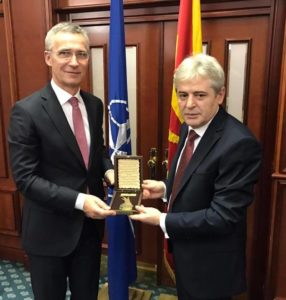 Macedonia doesn’t have a long term future within or without the EU if a segment of the population and its “mainstream” politicians hold Neo-Nazi views such as the Albanian political bloc. That doesn’t make for peaceful vo-existence.

Albanian Nazi collaborator Xhem Hasa Gostivari took part in ethnic cleansing of Macedonians during World War II. He also murdered Albanians who didn’t support fascism. Building a statue to him post 2001 signifies that Albanian leaders hold these alarming views now in the 21st century. The EU and US deliberately say nothing.

Comment by Canadian-Macedonian pundit Mark Branov (left) about the disturbing parallels between Golden Dawn and DUI:
“Ahmeti and Co. are a creation of the Euroatlantic power structure. Originally deployed in Kosovo, the UCK [KLA] became the ONA [NLA] in 2001, which in turn became DUI in 2002, but the terrorists remained a tool of Macedonia’s oppression by foreign interests. Meanwhile, the Chrysi Avgi [Golden Dawn] appear to simply be those Greeks who openly admit to the racism and xenophobia which is commonplace in modern Greek culture, and they are endorsed by agents of the Greek state, such as the police and the Greek Orthodox church.”
——–
ETHNIC CLEANSING
Just to reiterate, as we have pointed out above, there isn’t that much difference between Greek Neo-Nazi Golden Dawn and Albanian nationalist party in Macedonia (DUI/BDI): both believe in ethnic cleansing, part of the Neo-Nazi mantra. DUI has gone one step further, it has supported the building of statues to WWII Albanian Nazi collaborators such as Xhem Hasa Gostivari. Gostvari was financed by The Third Reich and took part in ethnic cleansing operations during WWII.
Golden Dawn:
“called to push for the complete Hellenisation of Greek Macedonia and Western Thrace through the expulsion of Northern Greece’s last remaining Macedonian-speaking minority (or so-called Slavophone Greeks)”
Ali Ahmeti, leader of DUI:
His racist motivation in starting the 2001 war in Macedonia:
“Our sole aim is to remove Slav [Macedonian] forces from territory which is historically Albanian.”
One of Ahmeti’s commanders: “Like all wars, ours was for territory – not because of some human rights problem!
-The Coming Balkan Caliphate, by Chris Deliso – link – extract below: 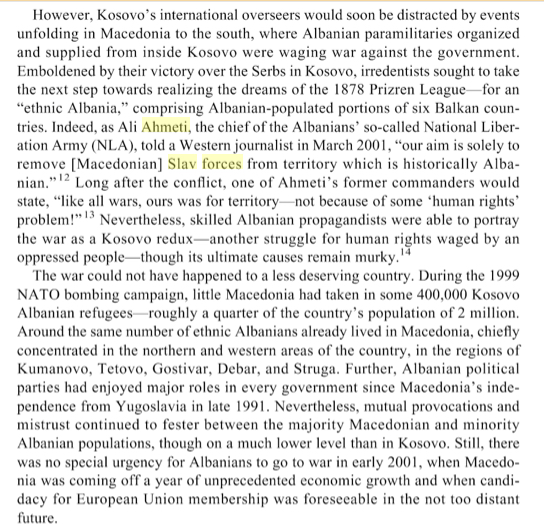 Imagine if a US Ambassador in Athens met with Greek Neo-Nazi Golden Dawn leader and had a media photo session with handshakes and smiles. What would the reaction be? Probably condemnation.

Yet in Macedonia back in 2010 US Ambassador Philip T. Reeker is all smiles with Albanian nationalist leader Ali Ahmeti who has supported the building of WW2 Albanian Nazi collaborator statues!

There is not a single condemnation by Reeker in any of the Wikileaks US diplomatic cables which also reveal Macedonia’s now Foreign Minister Slick Nick Dimitrov as a protected confidential source for then-Ambassador Reeker. see link here

——————————–
You can see below the list of people – US, EU officials, Macedonian and Albanian “experts” – all refusing in some manner or another to comment on Albanian Neo-Nazism in Macedonia.
Uncategorized