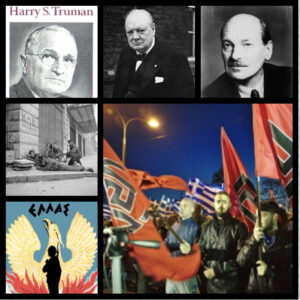 Greek Neo Nazi party Golden Dawn has proven a useful bogeyman for the US in achieving its strategic objectives in the Balkans, in particular Macedonia. With Golden Dawn’s usefulness no longer required, it has convienently been pushed off the political stage.

The genesis of Golden Dawn goes back to events leading up to and including the Greek Civil War (1946-49) and British and American intervention in that conflict. But first let us take a look at Golden Dawn’s ideology. In a nutshell it stands for a racially pure Greece, hates Jews and  ethnic minority Turks, Macedonians and Albanians living in Greece.

Golden Dawn is a far right Greek nationalist party which was established in 1985 and led by Nikolaos Michaloliakos. It elected members to the Greek parliament by 2012, becoming a serious force in politics. Golden Dawn members served in a so called Greek Volunteer Guard attached to Serb forces during the Srebrenica massacre in Bosnia in 1995. After the signing of the Prespa Agreement in 2018, Golden Dawn’s politician fortunes took a turn for the worst. After decades of the Greek authorities and police deliberately refusing to take action against the violent criminal behaviour of Golden Dawn, all of a sudden the party was dumped at 2019 elections and its leading figures imprisoned. Coincidence? No longer useful as a bogeyman for the US?

To give some background as to where Macedonia fits into the picture: for over 450 years Macedonia was occupied by the Ottoman Turkish Empire until 1912. In the late 1890s as a consequence of a national awakening led to the formation of a Macedonian revolutionary committee that aimed to fight for Macedonian independence. In August 1903 a rebellion known as the Ilnden Uprising against the Turks was brutally put down with Imperial German assistance.

The Balkan wars of 1912-13 saw Greece, Bulgaria and Serbia gang up on the Ottoman Empire and drive it out of the region and then partitioning Macedonia amongst themselves. A brutal assimilation, ethnic cleansing campaigns began against the Macedonians in all three parts of their divided historical homeland. In 1944 the part that had been under Serbian colonial rule managed to free itself and became a consitutient republic in Tito’s Communist Yugoslavia. With Yugoslavia’s collapse, the Republic of Macedonia declared independence in 1991 but Greece opposed its existence from the very start. It placed a suffocating economic embargo with the aim to change Macedonia’s name and deny its Macedonian identity. It blocked it from joining the European Union and NATO. Bulgaria recognised Macedonia’s independence as a state but not its Macedonian character, claiming that Macedonians were Bulgarians.

A decades long campaign ensured to somehow get Macedonia into the EU and NATO. In June 2018, the controversial Prespa Agreement, believed to be drafted by the US in the background, signed by both a US installed Macedonian government led by Zoran Zaev and Greece led to Greece lowering enough opposition to Macedonia joining the EU and NATO. But the Agreement required Macedonia to change its name to “North” Macedonia and deny the existence of a Macedonian minority Greece, change its history. In effect erase its own identity for what amounts to US strategic interests in the Balkans, in getting Macedonia into NATO and denying the Russians any kind of influence.

A referendum was held in Macedonia in September 2018 which led to a low turn out below the threshold needed-because of a deliberate boycott, meaning the majority of Macedonians did not support name change in order to join EU and NATO.

This is where the bogeyman of Golden Dawn came in handy for the US. Macedonian opponents of the Prespa Agreement were disingenuously likened to Golden Dawn which also opposed the Prespa Agreement but its opposition was on different grounds altogether. It’s like regarding the victim-macedonians-as the same as their historical victimisers-Greek nationalist extremists. It’s also deliberately insulting

Golden Dawn hates Macedonians; refuses to acknowledge their existence. Golden Dawn held massive rallies in Greece opposing the Prespa Agreement. The US, UK and the EU cleverly pretended to be honest brokers and the so called voice of moderation. It’s a clever trick. In the Vietnam War, the US ‘s CIA ran the Phoenix Program which amongst other things tried to provoke the killing of innocent Vietnamese and blame it on the insurgent Viet Cong and with the US acting as the knight in shining armour.

During the Greek Civil War (1946-49) many Macedonians joined the leftist side because they were offered some semblance of ethnic. rights long denied them by successive Greek regimes.

Simply put Greek Neo Nazi party Golden Dawn is a US and British creation. As Conn Haillinan explains in the Nation

It should hardly come as a surprise that there are close ties between the extreme right and Greek security forces. The current left-right split goes back to 1944, when the British tried to drive out the Communist Party—the backbone of the Greek resistance movement against the Nazi occupation. The split eventually led to the 1946-49 civil war, when Communists and leftists fought royalists and former German collaborationists for power. However, the West saw the civil war through the eyes of the then-budding Cold War, and, at Britain’s request, the United States pitched in on the side of the right to defeat the left. In the process of that intervention—then called the Truman Doctrine—US intelligence services established close ties with the Greek military.

Golden Dawn was founded by some of the key people who ruled during the 1967-74 junta, and Greek dictator Georgios Papadopoulos, the leader of the colonels who led the 1967 coup, groomed the party’s founder and current leader, Nikos Michaloliakos. Papadopoulos was a Nazi collaborator and served with the German “security battalions” that executed 130,000 Greek civilians during World War II. Papadopoulos was trained by the US Army and recruited by the CIA. Indeed, he was the first CIA asset to govern a European country.

In 1948 we also have the eyewitness account of Greek Jewish scholar Rae Dalven who worked for UNRAA in Greece about how the US and UK used Greek Nazi collaborator and anti Semites duding Greek Civil War. In an article headlined Greek Jews under the Truman Doctrine, published in The Sydney Jewish News (Australia) on 27 February 1948, she writes:

But I found something that shocked me profoundly. The monarcho-fascist appeaser minority of Greeks, who are being kept in power by our American “aid” programme, are tyrannizing over the vast majority of Greeks. And these same neo fascist Greeks are spreading the old lie that all Jews are rich and do not need help from the State.

They are denying that the Jews are Greeks and they are saying that Jews should not have full national rights as Greek citizens. I was not proud that these anti Semitic and pro-fascist forces are being maintained in power against the will of the Greek people by my own America. 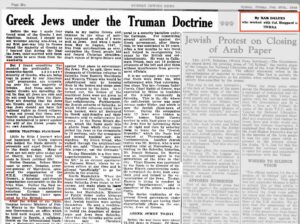 US expert Christopher Simpson in this book Blowback details America’s use of WW2 Greek Nazi collaborators and anti Semites during the Greek Civil War, some of whom, such as Papadopoulos, would later prove to be the founders of Greek Neo Nazi party Golden Dawn. 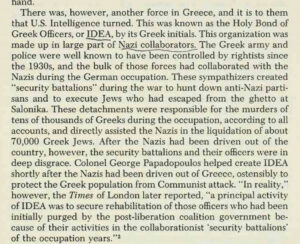 The recent Executive Order issued by US President Joe Biden which threatens to blacklist anyone opposing the Prespa Agreement in reality seeks to close down debate -in fact criminalises dissent- about the US and UK role in supporting Greek extremists during Greek Civil War (& later Junta) & the ethnic cleansing of Macedonians from Greece. 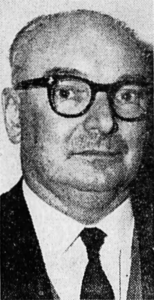 Australia Army Colonel A.W. Sheppard (pictured left) won a Military Cross for bravery against Nazis Germany  in the 1941 campaign Greece 1941. He worked for UNRAA in Greece during Civil War and strongly criticised UK and US support of Greek right wing extremists, anti Semites & the mistreatment of the Macedonian minority in Greece. One of his UNRAA colleagues was Rae Dalven. She mentions him in her article, quoted above.

Opponents tried to smear and silence Australian Army Colonel A.W. Sheppard MC over his criticism of UK/US support of Greek extremists/anti-Semites in Greek Civil War and mistreatment of Macedonians by falsely accusing him of being communist and even demanded his Australian passport be confiscated

You can now understand why UK and US support Prespa Agreement. It whitewashes their vile activities during the Greek Civil War. Using “blacklists” to ban people from travelling in order to silence them from dissent is not a new tactic! 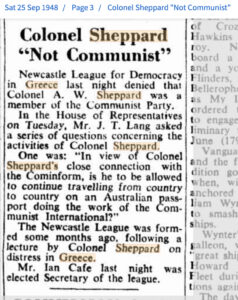 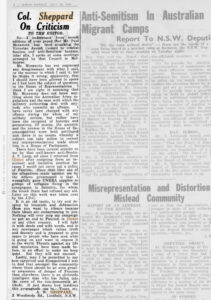