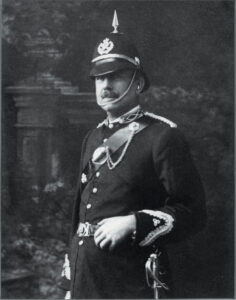 A.G. Sainsbury, the Chief Commissioner of Victoria Police- the police force of Victoria, a state in the Commonwealth of Australia,-proposed the setting up of an Australian Police Brigade to fight for the British Empire in World War I and with himself as the commander of the unit. However the proposal was rejected by the then Victorian State government.

Pre and post WWI, Australian identity was different to what we now know it to be. Back then, Australian and British identities were synonymous and interchangeable, with the exception of Irish nationalists in Australia.

Sainsbury was Chief Commissioner during the period 1913-19, which included WWI (1914-18). In WWI the British Empire allied with France, the Russian Empire opposed the German, Austro-Hungarian and Ottoman Turkish Empires. The United States entered the war in 1917 on the side of Britain.

Australia, federated in 1901, that is six British colonies of Victoria, New South Wales, South Australia, Western Australia, Queensland and Tasmania formed the Commonwealth of Australia, itself a British dominion, self governing colony. London handled all of Australia’s Foreign and Defence policy until 1942. Britain colonised the Australian continent in 1788, displacing the original owners, indigenous Australians also known as Aborigines.

In August 1914, the Herald newspaper reported:

“Mr Murray, the Chief Secretary, is not impressed with the suggestion made by Mr A. G. Salnsbury. Chief Commissioner of Police, at the meeting held at the Town Hall on Saturday night that an Australian Police Brigade should be formed to serve as a military force abroad. The Minister is of opinion that the proper course for any of the police In the six States desiring to serve to volunteer for the Australian expeditionary force.

“Mr Salnsbury forwarded to Mr Murray today a full report of the speech which he made at the meeting, which was called mainly to help the Patriotic Fund by holding a carnival. The Chief Commissioner, in the course of his remarks, said that he thought a much more effective way to help the empire would be to form a police brigade, and he roughly outlined a scheme that he thought would be applicable to all Australia. He expressed the view that it would he passible to secure the services of 1000 men in Victoria, including some former members of the force. Mr Sainsbury offered to serve with the brigade in a responsible capacity.”

Alfred George Sainsbury, who was staunchly British in outlook as were most Australians at the time, even refused to take in police recruits, urging them to volunteer for the Army and Navy and fight for the British Empire overseas. He advocated a draconian measure, using Germans as human shields on British ships to deter German submarines from sinking the ships. There is no evidence it was ever implemented.

Sainsbury is interned at Fawkner Cemetery in Melbourne’s north. He retired from Victoria Police in 1919 and died in 1920. 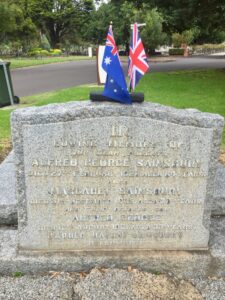 Victoria Police enthusiastically supported the British Empire’s war efforts. Some of its members were permitted to raise money through donations from fellow police. 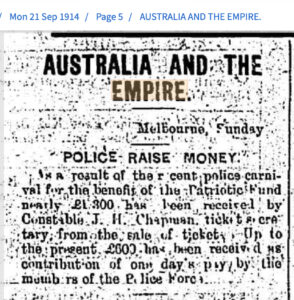