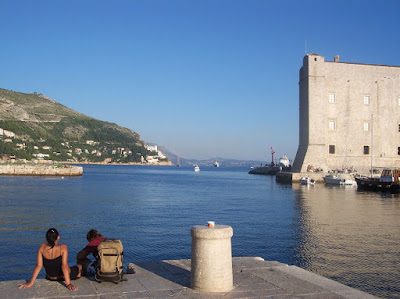 Western backpackers enjoying the scenery in Dubrovnik, Croatia.
Photo copyright Sasha Uzunov 2005.
ON-LINE OPINION – Australia’s e-journal
http://www.onlineopinion.com.au/view.asp?article=8612&page=0
CSI Dubrovnik: the Britt Lapthorne mystery
by Sasha Uzunov – 4 March , 2009
The American forensic crime show franchise, CSI: Crime Scene Investigations, CSI: Miami, and CSI: New York, has sparked enormous public interest in the use of science to solve mysterious deaths or murders. Perhaps with the media feeding frenzy associated with the tragic Britt Lapthorne case, we could see a Dubrovnik CSI hitting our TV screens.
In television the whodunit is solved within 60 minutes but in real life, answers may never be found.
We know that the 21-year-old Melbourne backpacker was last seen leaving a night club in the Croatian seaside resort town of Dubrovnik on September 18, 2008 and in October of the same year her decomposed body was found in Dubrovnik waters. Her parents maintain she was murdered.

Many theories about how Lapthorne died or was killed have been offered. The latest comes from former New Zealand law graduate turned award winning television investigative reporter, Ross “Rosco” Coulthart of the Seven network. Rosco Coulthart was able to track down other female tourists who had alleged they were approached by men posing as Croatian police officers and who tried to abduct them. A photo sketch of the alleged assailants revealed they were serving Croat police officers. But local officials denied any police involvement.

Coulthart has an excellent track record in uncovering big stories and is one of the Australian media’s genuine nice guys.
However, a highly respected former Australian multicultural SBS TV star reporter, now living in Croatia, believes that the international media needs to tone down its hysterical coverage of the Britt Lapthorne and focus on the facts. Mr Vladimir Lusic, Croat born Australian who hosted the hugely successful SBS TV current affairs program Vox Populi, said:
“The Lapthorn case investigation is still open and, as far as I know, Croatian and Australian police experts are co-operating. What the outcome will be I refuse to predict since I am still a proud former Australian award winning investigative journalist.
“Everyone in Dubrovnik and the rest of Croatia sympathise with the young girl’s family, relatives and friends. In line with that, whatever the Lapthorn family thinks and says is completely understandable – they tragically lost their beloved daughter.
“However, all extensive ‘investigative’ media reports about the case and Dubrovnik which do not include all the facts are incomplete and misleading. Not telling the whole truth is equal to telling a lie,” he said.
Mr Lusic was awarded 1989 Golden Gavel Award for Excellence in Legal Reporting.
Mr Peter Hanrahan, SBS TV’s founding current affairs and news director, on December 13, 1990 told Australia’s prominent ethnic affairs expert, reporter John Masanauskas that Lusic was “a very competent journalist and always fair”.
Lusic now works for the Croatian State Broadcaster HRT (Hrvatska Radio Televisija) and heads its International Section.
Lusic has ruled out the possibility that Albanian organised crime elements tried to kidnap the Australian backpacker to use her in a brothel.
“What Albanian mafia? There are no ‘mafia’ organisations of any kind in Dubrovnik. It’s one of the world’s most peaceful tourist destinations,” he said.
“Movie stars, politicians, princesses and sheiks walk the streets without paparazzi and any other harassment. Children of all ages play in the parks without any supervision. Hundreds of thousands of tourists, including young people, pass through Dubrovnik every year. It is true that young tourists have more ‘fun’.
“They drink, get drunk and have sex on the beaches – even on the rocks high above the sea. Over the past century there were incidents when people fell or jumped from the rocks.
“However, in comparison with other places in Croatia and the world, such incidents were extremely rare. More importantly, not one kidnapping has ever been recorded in the Dubrovnik region – except, of course, during the 1991-1992 war when the Serbian led aggression on Croatia brought looting, raping, murder, destruction of property etc.”
According to testimony given to the United States Senate by the FBI in 2003, Balkan organised crime groups, particularly those composed of ethnic Albanians, have expanded rapidly over the last decade to Italy, Germany, Switzerland, Great Britain, and the Scandinavian countries, and are beginning to gain a foothold in the United States. In the last year or two, European nations have recognised that Balkan organised crime is one of the greatest criminal threats that they face. European police organisations now estimate that Balkan organised crime groups control upwards of 70 per cent of the heroin market in some of the larger European nations, and are rapidly taking over human smuggling, prostitution and car theft rings across Europe.
This writer has been to Croatia three times, 1983, 2002 and 2005 and walked the streets at night and felt very safe. In 2005 in Dubrovnik I saw hundreds of Aussie, Kiwi, Pommie, Yank, Canuck (Canadian) backpackers enjoying themselves. I even remember recognising a heavily intoxicated and aggressive Australian TV camera operator and a companion on holiday giving the locals at Dubrovnik airport disdainful looks in jest. It was all light hearted fun.
For the sake of justice and for the peace of mind of the Lapthorne family, hopefully, closure can be found.
(end)——————————————————————————-
Sasha Uzunov is a freelance photo journalist, blogger, and budding film maker whose mission is to return Australia’s national defence/ security debate to its rightful owner, the taxpayer. He also likes paparazzi photography! He graduated with a Bachelor of Arts degree in Journalism from The Royal Melbourne Institute of Technology in 1991. He served as a professional soldier in the Australian Army from 1995 to 2002, and completed two tours of duty in East Timor. As a journalist he has worked in the Balkans, Iraq and Afghanistan. His blog is at Team Uzunov.