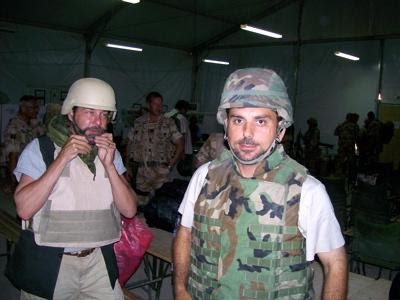 Canadian reporter Scott Taylor (left) and Sasha Uzunov (right) in Kandahar, Afghanistan to film a documentary in 2007 for Canadian television. Uzunov does a Jim Waley impersonation by donning a flak jacket and helmet.
It has has taken The Sunday Age’s (Fairfax newspapers) self-appointed
defence expert, Tom Hyland, three years to reveal, courtesy of wikileaks,
what TEAM UZUNOV reported back in 2007 about Australia’s mission in
Afghanistan, in particular the difficult relationship with our ally the Dutch.
Here’s Hyland’s story:
www.smh.com.au/technology/technology-news/bickering-warriors-in-coalition-of-unwilling-20101225-197es.html
Bickering warriors in coalition of unwilling
December 26, 2010
Mistrust, indecision and hostility undermined Australia’s alliance with the Dutch and Americans in what was supposed to be a united front against the Taliban and in restoring stability to Afghanistan, writes Tom Hyland.
We squabbled with our allies, yet in public we talked of close co-operation. We frustrated the Americans with unfulfilled promises. Our politicians big-noted in public, but dithered in private.
Our bamboozled bureaucrats tried to make sense of the details. All along, the public was kept in the dark. Thanks to WikiLeaks, we now have an insight into the diplomatic and political skirmishes behind the war in Afghanistan, now in its ninth year and which has cost 21 Australian lives.
Cables from 2007 reveal intense distrust between Australian and Dutch forces in Oruzgan province, where Australia was part of a Netherlands-led force….
In February 2007, Australian officers, concerned that the Taliban were preparing a do-or-die offensive, started planning to send special forces back to Oruzgan.
This was just five months after the Howard government pulled them out, in September 2006, when it argued Oruzgan was ”relatively stable”.
The government and defence chiefs defended the withdrawal at the time, saying Australian reconstruction troops remaining in the province were well-protected, with their own forces and 1400 Dutch soldiers.
But their claims of stability and their stated faith in the Dutch were undermined by early 2007, when intelligence reports warned of a Taliban resurgence….
http://newmatilda.com/2007/06/06/news-front
AFGHANISTAN
6 Jun 2007

News from the Front

By Sasha Uzunov
Australian journalist Sasha Uzunov reports from the Afghan front
The Forgotten War
Sometimes it takes an outsider to tell us the most uncomfortable truths.
Last week, Defence Minister Dr Brendan Nelson took a swipe at critics who question the pace at which Australian troops are securing their designated province in Afghanistan, saying:

Any suggestion Australian troops are not pulling their weight in southern Afghanistan is beneath contempt. Australia is steadfastly committed to Uruzgan as shown by the recent decision to deploy a Special Operations Task Group of approximately 300 people to the region.

However, the recent decision to send Special Forces back to Uruzgan could also be read as a tacit admission that not all is well with the mission. (Who was the genius who decided to remove our Special Forces soldiers from Afghanistan late last year?)
When I asked the Defence Minister if a rift had developed between Australian troops and the Dutch Army engineers they are serving alongside, over who was doing the most to secure Uruzgan, Nelson would not comment.
The controversy was sparked by prominent German journalist, Ulrich Ladurner, who claimed, in an interview he gave to me at Kabul airport on 14 May, that both the Australians and Dutch were being slow in establishing security in the province.
read more at
http://newmatilda.com/2007/06/06/news-front
Tom Hyland’s Fairfax colleague, Suzanne Carbone, had the courtesy to give credit where credit is due.
Perhaps Hyland should realise that Australia’s Defence debate is not the preserve of “experts” but belongs to the Australian taxpayer who has to pick up the tab.
http://teamuzunovmedia.blogspot.com/2009/03/holding-peacemakercircuit-breaker.html
Friday, January 30, 2009 – TEAM UZUNOV
MINISTER ON AFGHAN FACT FINDING TRIP?
ExclusiveTim Holding – Brumby’s man turned PM Rudd’s international man of mystery?

By Sasha Uzunov
Copyright 2009
Mr Tim Holding, a Victorian State government minister who is a former Australian Army Reserve Special Forces soldier, will not confirm nor deny speculation about him undertaking a short fact finding mission to Afghanistan on behalf of Prime Minister Kevin Rudd.

A prominent strategic analyst, who has the close ear of governments, and speaking on the condition of anonymity, said he wanted to “float the idea of Mr Holding undertaking a fact finding mission to the Australian base in Tarin Kowt province [in Southern Afghanistan].”

“Mr Holding is an intelligent young politician with links to Special Forces. The Australian media underestimate his ability, which is why he would be ideal for the mission: he would slip under the media radar,” the strategic analyst said. “Mr Holding has not been informed of the proposed trip.”

The analyst said Prime Minister Kevin Rudd was not happy with the flow of information about Afghanistan coming from the army chain of command and needed his own “eyes and ears” on the ground for a couple of weeks to assess the situation.

Mr Holding’s office was contacted a week ago to confirm or deny if Mr Holding knew the speculation about the Afghanistan trip. But no comment has been forthcoming.Mr Holding served as a Signaller or communications expert with the elite Army Reserve Special Forces unit, 126 Commando Signals Squadron, then attached to 1 Commando Regiment, 2nd Company, at Fort Gellibrand, Williamstown, Melbourne, Victoria from 1991 to 1993.

Greg Sher the eighth and most recent Australian soldier killed in Afghanistan was also a member of 1 Commando Regiment (1 CDO Regt).Mr Holding is the Minister for Finance, WorkCover and Transport Accident Commission, and Minister for Water, Minister for Tourism and Major Events in the John Brumby ALP state government.

Current military policy is for Australia’s Special Forces units, SASR and 4RAR (Commando) to do the frontline fighting in Afghanistan, which according to standard doctrine should be carried out by regular infantry.

SASR and 4RAR (Cdo)’s traditional roles include surveillance of the enemy, information gathering or carrying out raids against targets or securing entry and exits points for other army units.

In contrast the Canadian army, after decades of peacekeeping, has regular infantry fighting the Taliban in the dangerous southern Afghanistan province of Kandahar. But over 100 Canadian soldiers have been killed.

The Age, Diary Column, Tuesday, 3 February 2009.
Timmy, don’t forget to pack the water canteen
by SUZANNE CARBONE
TIM Holding was dubbed “Twinkle Twinkle” because he was considered a little star, and he’s really made an impact in the water portfolio with those faulty four-minute shower timers that last for 40 minutes or four hours. But Dim’s moment to shine may have arrived.

Former Australian soldier Sasha Uzunov, now a photo-journalist, writes in his blog that Holding (below) could be destined for Afghanistan as Kevin Rudd’s “eyes and ears” on the ground. You see, Holding is well credentialed as a former member of the Army Reserve in the 1st Commando Regiment – and he’s Tourism Minister.

A “prominent Canberra strategic analyst” told Uzunov: “Mr Holding is an intelligent young politician with links to special forces. The Australian media underestimate his ability, which is why he would be ideal for the mission: he would slip under the media radar.”

The analyst claimed the PM was not happy with the flow of information from Afghanistan so the analyst would suggest Holding embark on a “fact-finding mission” to the Australian base in Tarin Kowt. Diary asked Commando Holding about swapping a fluoro vest for a flak jacket, and he said:

“While I will sit by my phone awaiting the Prime Minister’s call, I will make it clear to him that I will only travel to Afghanistan in the company of my friends at The Age Diary.”
Who knew Twinkle had a sense of humour? We’ll only go if he acts as our human shield. And brings a shower timer that works.
(end)
————————————-
Canadian film on Afghanistan

View the complete film at this link:

“Afghanistan: Outside the Wire”
Afghanistan, The Age, The Sunday Age, Tom Hyland