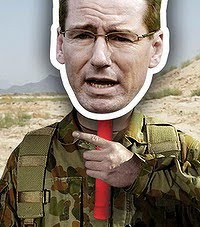 In what can only be described as a bizarre and poorly disguised takedown, Fairfax newspapers’ reporter Tim Lester has belittled Independent Senator Steve Fielding over a trip to Afghanistan to visit Australian troops, which coincided with the Federal Labor government announcing the next election to be held on August 21 this year.

Lester, formerly a television reporter with the ABC and Nine Networks, is a self styled “media tough guy” and “defence expert” who made a name for himself covering the conflict in East Timor (Timor Leste) in 1999.

In an article for The Age and The Sydney Morning Herald newspapers titled: “Steve Fielding, MIA [Missing In Action] in Afghanistan,” dated 22 July 2010, Tim Lester of Timor Leste fame wrote:

www.theage.com.au/federal-election/steve-fielding-mia-in-afghanistan-20100721-10l65.html
“STEVE Fielding’s eccentric political career could end at next month’s federal election, yet the Victorian senator has spent five vital days of the campaign on secret missions in southern Afghanistan.”
The story includes a digitally altered photo of an Australian soldier whose face is obscured with a Steve Fielding mask. You can get the gist of the story, ridiculing a politician for visiting troops in the field!

Lester, who has never served in uniform but acts as a “defence expert,” further wrote:

“The senator declined to give details of what Australian forces had shown him in Tarin Kowt [Australian Army base in Afghanistan]. ”Some of the missions are secret,” he said. ”A lot of the stuff has been high security.

“The senator was already in Afghanistan when he learnt new Prime Minister Julia Gillard had called the election.

“Senator Fielding won only 2 per cent of the primary vote in 2004, but was elected on Labor preferences. He is widely expected to lose his Senate spot in next month’s election, though he rates his chances at 50-50.

“He said his absence for the crucial opening days of the campaign ”will probably damage my re-election”.

“However, his secret trip did not stop his campaign. While abroad, he issued seven press releases from his Melbourne office on domestic issues. None mentioned the Afghanistan trip.

”We’re sending people here, you know … with their lives at risk to … make the world safer and the least that I could do was, you know, not to pull out for the sake of a couple of days with my own re-election campaign,” he said.

“ ”I thought it would probably be selfish doing that, selfish if I did come back.”

“Although claiming an early departure on his behalf from Afghanistan would have sent ”all the troops the wrong message”, he later conceded he had asked defence officials in Tarin Kowt ”about trying to get back and … is there any ways of getting back early”.”

My response to all this is so what? The Senator was right in going to Afghanistan and right in trying to get back early. After all, the electors of Australia pay the wages of both the Senator and of the soldiers fighting in Afghanistan. In a democracy such as Australia and neighbouring New Zealand, politicians and soldiers are answerable to the people!

Maybe Lester has forgotten this?

In essence this is a nothing story by a journalist who has been a war correspondent flexing his muscle or flashing his Media Sheriff’s Badge in trying to show how tough he is.

But people in glasshouses should not throw stones!

In 1999 as a serving Australian soldier I had the good fortune to be a man-servant in uniform to a high ranking Army officer in the Australian Defence Forces’ (ADF) Media Support Unit in East Timor. As well making great coffee, espresso, cappuccino and Turkish, for the Commanding Officer (CO) Lieutenant Colonel “Wild Bill” Pickering I had the privilege of observing some of Australia’s top war reporters in action.

I remember when Tim Lester, then with the ABC, was being farewalled from Timor in late 1999. I was standing a few metres away when Lester struggled to place a souvenir Australian Army bush hat on his head, his fellow ABC colleague Ginny Stein, an excellent and tough reporter in her own right, giggled and joked to expatriate Australian film maker based in Bangkok, Lyndal Barry:

“Tim would have to be the most unwarlike male war reporters I’ve come across. He is so disorganised. I have to do everything for him.”

Both women then broke out in hearty laughter.

Lester who hails from the deep south Australian state of Tasmania was proclaimed a local hero by his home state newspaper, The Examiner, in September 1999:

“Longford woolgrower Michael Lester remembers that his son Tim was an established journalist working in Sydney when he started paying $30 a half-hour for elocution lessons.

“Tim Lester has progressed and progressed in his career, reaching the coveted status of foreign correspondent, working as the South-East Asia correspondent for the ABC. He was among the last two ABC journalists to leave East Timor, fleeing Dili on Tuesday in a dramatic escape from the escalating drama.

“Lester was flown to Darwin, where he is understood to have remained yesterday. His father was looking forward to speaking to him again. “He is very involved and very dedicated to his work and certainly he’s suited to it,” Mr Lester said. “

In 2008 Lester, as a reporter with the commercial network Nine, complained the ADF would not be his taxpayer funded cab service in Iraq to observe Australian troops pulling out. He moaned:

“I am one of the reporters who wanted the necessary transport and protection to cover our 550 combat troops as they leave Tallil Air Base in Southern Iraq.”

But surely the great Tim Lester of Timor Leste fame would not need ADF transport and protection to navigate through a warzone in Iraq?

Britain’s top war reporter Sir Max Hastings, in his autobiographical account of his career, Going to The Wars, tells of taking a private taxi to the Golan Heights during the 1973 Yom Kippur War that pitted Israel against its Arab neighbours and of driving with a colleague into the Sinai desert, after not receiving any assistance from the Israeli government.

What the Australian public deserves and needs are journalists willing to report the story without the Australian media’s obsession with the “media tough guy/gal” reporter shtick and doses of Hollywood.

The irony is that one of Australia’s top war reporters, John Martinkus, and formely with SBS TV’s Dateline program is cooling his heels in Tasmania as an academic instead of reporting in Afghanistan. Furthermore we need journalists of the calibre and strength of Ginny Stein, now with SBS Dateline, in Afghanistan as well.