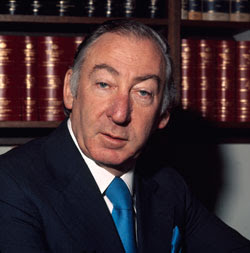 TERRORISM MANIA: Australia’s Federal Attorney-General Lionel Murphy (left) and The Canberra Times newspaper Editor At Large Jack Waterford (below). In 1973 Waterford received an unexpected & accidental tip-off from the Australian Security Intelligence Organisation (ASIO) that A-G Murphy would be raiding the headquarters of the spy service–in search of information on “alleged Croatian terrorists.” Waterford’s revelation appears in a documentary film “UDBa down under-Yugoslav spying in Australia,” due for release in 2013. 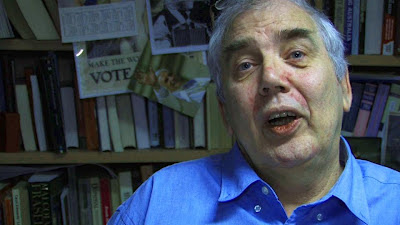 – The 1973 tragi-comedy raid upon ASIO HQ.
– Journalist accidently tipped off by ASIO over raid !
The infamous 1973 Murphy Raid on the Melbourne headquarters of the Australian Security Intelligence Organisation (ASIO) in search of documents on alleged Croatian extremists was terrorism mania gone mad.

To add to this high farce, which plunged the country’s counter-intelligence capabilities into crisis, ASIO inadvertently passed on a tip to a journalist, Jack Waterford, now Editor At Large for the The Canberra Times !

The then Prime Minister Gough Whitlam lamented “the greatest mistake the Government has made has been to take the (Commonwealth) police into ASIO HQ.”

Jack Waterford, interviewed on camera for a documentary film “UDBa down under-Yugoslav spying in Australia,” due for release in 2013, revealed:
“And I became involved in it accidently…because there was a journalist at the Canberra Times at the time who was incredibly close to ASIO which I was most definitely not…

“But I came into the office one day … His phone was ringing and I picked it up and before I had a chance to say ###### is not here. Somebody said “look ###### I haven’t got much time to talk to you but Murphy raided ASIO in Canberra last and he’s on a plane down to Melbourne to raid it (headquarters)…” “

In lessons that are still applicable to today’s “war on terror,” the de-classified ASIO post action report–submitted with other files to the 1974-77 Hope Royal Commission of Inquiry into Intelligence and Security and now lodged with the National Archives of Australia–on the raid shows what happens when jumping on ideological bandwagons, political opportunism and burning ambition get in the way of serious and genuine counter-terrorism work.

With the benefit of hindsight, the report has turned out largely to be accurate.

But what was the objective of the raid?  In mid March 1973, Federal Attorney General Lionel Murphy together with this Commonwealth Police Praetorian Guard and Milte raided the ASIO offices in Canberra and Melbourne, believing, as it turns out wrongly, that ASIO was withholding documents on alleged Croatian terrorists who posed a threat to the Yugoslav Prime Minister Dzemal Bijedic, a Bosnian, about to arrive in Australia on an official visit.

The raid was amateurish, keystone cops stuff. Murphy was told by ASIO during the raid that Yugoslav intelligence service- UDBa – could be setting up Croats but Murphy dismissed it.

Murphy just wanted to see the files on Croats.

“…Kerry Milte, a former Commonwealth Police officer who had come to the attention of Murphy via his press secretary George Negus [big name Australian journalist]. Milte was one of the helpers who latched themselves on to the new Labor Party [ALP] government and had his own ambition in Murphy’s restructuring of the Commonwealth Police Force. It was he who first suggested to Murphy that ASIO was withholding vital information from him concerning Croatian terrorism in Australia, and soon Milte was on Murphy’s staff as an advisor.”

But other ASIO documents, not related to the Hope Royal Commission, reveal that a Yugoslav proposal dating back to the late 1960s and repeated in early 1970s included the sending of a Yugoslav intelligence (UDBa) officer to Australia to exchange information on “Croatian terrorists” with the Australian Security Intelligence Organisation (ASIO) and the Commonwealth Police Force (the forerunner of the Australian Federal Police).

But incredulously the Yugoslav government could not find a suitable UDBa officer with English language skills !

“Visits by Attorney-General to ASIO Offices at Canberra and Melbourne on 16 and 22 March 1973” report, chapter 18, in no uncertain terms tells of an intelligence war fought between the Commonwealth Police (later to become the Australian Federal Police in 1980) and ASIO over domestic counter-intelligence and counter-terrorism, especially over the handling of the Croat issue.

Milte was accused of wanting to establish his own security empire in turning the Commonwealth Police into an Australian version of the American FBI. The two documents below show ASIO’s dislike of Milte and his showdown with ASIO officer M.D. Boyle. 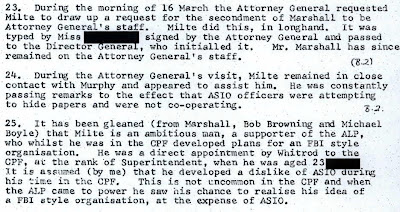 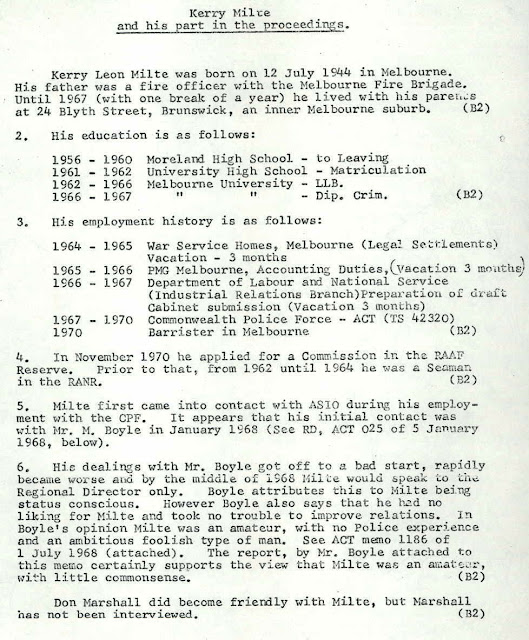 The Commonwealth Police Chief at the time Ray Whitrod (1960-69) and Milte tried to infiltrate an Aboriginal Rights protest in Canberra during 1968. Milte dressed up and pretended to be a protester in order to infiltrate radical student demonstrators. The 1968 ASIO report deliciously points out that Milte even carried a protest sign and Whitrod in sports attire was waiting for Milte. Comedy gold. You couldn’t make this stuff up ! Can you imagine a current State or Federal Police Chief doing that now?! 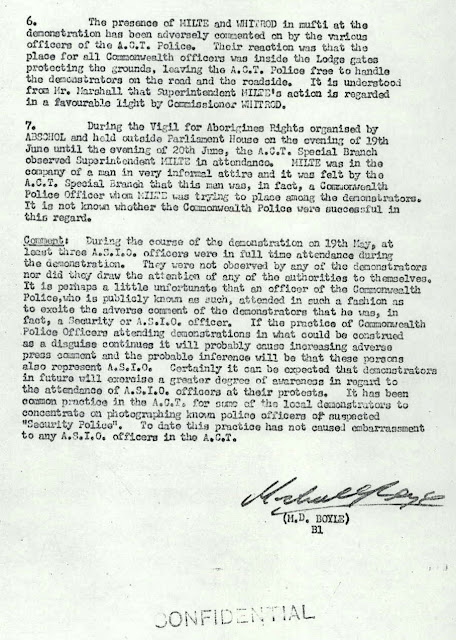 To understand the dynamics of the Yugoslav versus Croat showdown: Communist Yugoslavia was a federation of Serbs, Croats, Macedonians, Slovenes, Montenegrins, Muslim Bosnians, and other ethnic groups, led by Marshal Josip Broz Tito who broke away from the Iron Curtain in 1949. A rivalry developed between Yugoslavia and the Soviet Union, which Tito managed to use to his advantage by squeezing aid out of the West in order to stay out of the Soviet Camp.

But Tito was also adept at cosying up to the USSR when it suited him, especially after the death of Soviet dictator Joseph Stalin in 1953.
In the early 1970s the Yugoslav government began a campaign to discredit emigre Croats, Macedonians and others opposed to the regime, whether their opposition translated into terrorism or just peaceful means. So a dirty tricks strategy was commenced with agent provocateurs and infiltrators, ironically learned from the Soviet Secret Police Cheka/OGPU/NKVD/KGB.

Preview / Trailer no 4 – UDBa down under – Yugoslav spying in Australia.

Legendary Australian newspaperman Jack Waterford reveals that the Soviets may have had an interest in the Yugoslav versus Croats showdown in Australia during the early 1970s. His interview in the preview clip – Preview / Trailer no 4 – UDBa down under – Yugoslav spying in Australia.

Award winning Australian journalist Hamish McDonald talks about the Croatian Six case. His interview in the preview clip – Preview / Trailer no 4 – UDBa down under – Yugoslav spying in Australia. 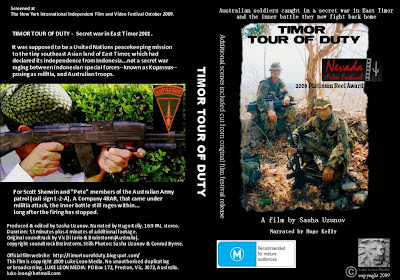