Mr Tim Holding, a Victorian State government minister who is a former Australian Army Reserve Special Forces soldier, will not confirm nor deny speculation about him undertaking a short fact finding mission to Afghanistan on behalf of Prime Minister Kevin Rudd.

A prominent strategic analyst, who has the close ear of governments, and speaking on the condition of anonymity, said he wanted to “float the idea of Mr Holding undertaking a fact finding mission to the Australian base in Tarin Kowt province [in Southern Afghanistan].”

“Mr Holding is an intelligent young politician with links to Special Forces. The Australian media underestimate his ability, which is why he would be ideal for the mission: he would slip under the media radar,” the strategic analyst said. “Mr Holding has not been informed of the proposed trip.”

The analyst said Prime Minister Kevin Rudd was not happy with the flow of information about Afghanistan coming from the army chain of command and needed his own “eyes and ears” on the ground for a couple of weeks to assess the situation.

Mr Holding’s office was contacted a week ago to confirm or deny if Mr Holding knew the speculation about the Afghanistan trip. But no comment has been forthcoming.

Greg Sher the eighth and most recent Australian soldier killed in Afghanistan was also a member of 1 Commando Regiment (1 CDO Regt).

Mr Holding is the Minister for Finance, WorkCover and Transport Accident Commission, and Minister for Water, Minister for Tourism and Major Events in the John Brumby ALP state government.

Current military policy is for Australia’s Special Forces units, SASR and 4RAR (Commando) to do the frontline fighting in Afghanistan, which according to standard doctrine should be carried out by regular infantry.

SASR and 4RAR (Cdo)’s traditional roles include surveillance of the enemy, information gathering or carrying out raids against targets or securing entry and exits points for other army units.

In contrast the Canadian army, after decades of peacekeeping, has regular infantry fighting the Taliban in the dangerous southern Afghanistan province of Kandahar. But over 100 Canadian soldiers have been killed.

Are our troops really helping in Afghanistan?

…Some have criticised General (Peter) Cosgrove on his over reliance on the SAS to do the fighting in East Timor that would normally have been taken up by the regular infantry.But I think this criticism is unjustified.

Criticism should be aimed at the government of the day (Howard 1996-2007) and those at home squeamish about seeing a 19 year old lad away from home for the first time fighting a war. Better to send the SAS, whose identity cannot be revealed… 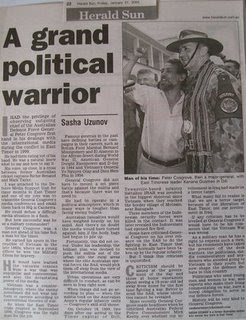