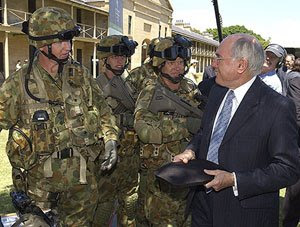 The current Australian Defence Minister Joel Fitzgibbon has tacitly acknowledged the wearing down of our Special Forces, because of the failed Nelson-Howard military doctrine, in the Afghanistan War.

But we must remember two things:

One, we must be prepared to accept casualties of young infantry soldiers, grunts.
And, secondly, more force does not necessarily mean success. The answer to winning in Afghanistan involves a combined political and military strategy.

The SASR and 4RAR (Commando) are our two Specials Forces units and are a precision tool to be used sparingly, not as a blunt instrument. Australian infantry soldiers have recently expressed their dissatisfaction at being kept away from the sharp end in Afghanistan. And the question must be asked: how long can the new Rudd Government use the SAS Regiment and 4RAR (Commando) in an infantry role before they become worn out? When will the Government allow our infantry to do the job they have trained for?

In 1999 the Howard government used the army’s elite Special Forces unit, the SAS, to do most of the fighting in East Timor, which should have been performed by the infantry. The political logic was that the public and media would accept SAS casualties rather than a young infantryman, fresh out of home or from a small country town. That political priority seems to remain. But political logic does not necessarily make good military sense, and vice-versa.

In East Timor, the pro-Indonesian militia tried to inflict as many casualties as possible on our infantry units, including battalions made up of many reserve soldiers, in the hope that Australia would withdraw. The moral of the story is, no matter how hard the Australian Government tries to insulate our infantry from combat by using the SAS, the unexpected happens…
—————————————————–
courtesy of The Aussie Digger

All Australia’s offensive combat operations in Iraq and Afghanistan have been carried out by elite SAS and commando units, but there are calls within the Army for regular infantry units to be given some of the combat burden.

The issue was raised in the autumn issue of the Australian Army Journal when two serving officers wrote that keeping the infantry out of the front line was having a negative effect on morale.

Mr Fitzgibbon says more than 1,000 Australian soldiers are currently in Afghanistan and he does not intend to increase that number.

But he says he will consider using the infantry in combat roles for the first time to ease the load on the Special Operations Task Group (SOTG).

“It is true that our Special Operations Task group – that is, our special forces people – have had to sustain rotations for a long, long time now,” he said.

…Some have criticised General (Peter) Cosgrove on his over reliance on the SAS to do the fighting in East Timor that would normally have been taken up by the regular infantry.
But I think this criticism is unjustified.

Criticism should be aimed at the government of the day (Howard 1996-2007) and those at home squeamish about seeing a 19 year old lad away from home for the first time fighting a war. Better to send the SAS, whose identity cannot be revealed… 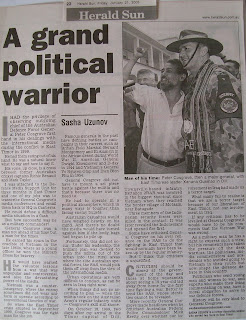