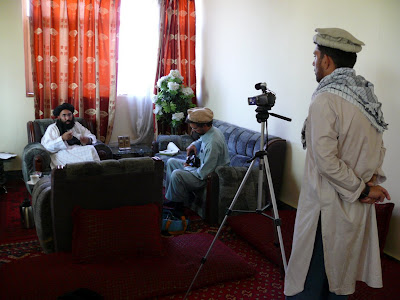 Sasha Uzunov dressed in native Afghan clothes behind the camera taping Mullah Zaeef. On the right is Canadian journalist David Pugliese, also in native dress. (Photo by Scott Taylor)
DAVID HICKS MORE THAN MEETS THE EYE
by Sasha Uzunov
David Hicks, the Australian convicted of supporting terrorism in Afghanistan, has been in the news again.
Whatever you think of David Hicks, there is certainly more to the story than meets the eye.
In May 2007 as an Australian journalist, along with Canadian colleagues, Scott Taylor and David Pugliese we were granted an interview with a former Taliban Ambassador to Pakistan, who spent 4 years in Guantanamo Bay, and were surprised to hear his negative thoughts about David Hicks…
This was an exclusive Australian story in the Melbourne Herald Sun newspaper at the time.
I also video taped an interview with the ex-Taliban diplomt.
http://www.news.com.au/heraldsun/story/0,21985,21743054-662,00.html
Herald Sun newspaper
David Hicks not ‘true Muslim’

Sasha Uzunov
May 17, 2007 12:00am
DAVID Hicks was not a true Muslim and was regarded as a possible spy by other accused terrorists at Guantanamo Bay, says a former inmate and one-time Taliban diplomat.
“All the people, including me and the Arabs, we’re thinking he was a spy,” said Mullah Abdul Salam Zaeef, back in Afghanistan after spending nearly four years in US custody including at Guantanamo Bay.
“He was separated from us. The Americans were scared he would be killed by the other prisoners,” the Afghan man said in an interview in Kabul. “He was not a true Muslim.”
After five years in US custody, Hicks is expected to leave Guantanamo Bay within days for Australia, where he will serve nine months in a jail near Adelaide before being set free. He is being returned to Australia under a deal after pleading guilty in a US military commission to a charge of providing material support for terrorism.
Hicks was captured in Afghanistan in late 2001, where he was accused of training with al-Qaida and of fighting alongside Taliban troops. But Zaeef, a former Taliban minister and ambassador to Pakistan, denied Hicks was part of the Taliban regime, toppled from power in Afghanistan by the US invasion in 2001.
After his release without charge by the US, Zaeef now lives in Kabul but under the close watch of the Hamid Karzai Government, which provides a security guard for his protection. Zaeef said he was not in contact with the current Taliban leadership, who are fighting Australian and other coalition troops. He said Australia was now an enemy of the Afghan people because it had supported the US-led war in Afghanistan. Zaeef said coalition forces had killed a lot of Afghani people.
“And the people became enemies of the Americans, of the Canadians and others,” he said.
“People are not thinking the Americans, the Canadians are neutral, that they have come for peace and stability. “The people are thinking that the Canadians, the British, the Americans are all enemies since they are killing us.”
—————————————-
LINKS:
http://www.canada.com/ottawacitizen/news/story.html?id=86adcc80-9ee6-49bc-a35b-6df71597e5b0&k=37467
NATO, U.S. stand in way of peace in Afghanistan: Taliban chief
Most Afghans blame foreign forces for civilian deaths, former official says
David Pugliese, The Ottawa Citizen
Published: Wednesday, May 09, 2007
———————————————————