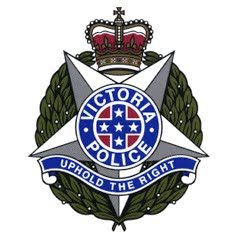 PART 4 – THE FIGHT AGAINST YUGOSLAV INTELLIGENCE IN AUSTRALIA

Fourth part in a series on Yugoslav intelligence activities on Australian soil from the 1970s to the early 1990s.

The full story can now be told…

International terrorists must be rubbing their hands with glee at the news that the Australian state of Victoria’s Police Force will abolish its highly effective counter terrorism unit, the Security Intelligence Group (SIG).

Why you would tamper with something that has been successful is hard to fathom? In comparison, the United States has learned its lessons after the initial 9/11 intelligence gap and recently after a decade has finally taken out terrorism mastermind Osama bin Laden.

Australia is a federation of six states and two territories, each with their own police force. The Australian Federal Police (AFP) is a separate entity. The domestic spy service is the Australian Security Intelligence Organisation (ASIO).

In light of this, a little known Victoria Police operation 20 years ago helped to stop the flood of illegal weapons getting onto the streets and into the hands of home grown terrorists. The impact it had was to send a message–loud and clear– that overseas linked crime and terror were not going to be tolerated in the state of Victoria, Australia.

That story can now be told because one of the leading figures behind that operation passed away early last year after a long illness.

Detective Senior Constable Geoffrey Ian Gardiner, who retired in 1998, was part of the PSG (Protective Services Group) within the Victoria Police at the old Russell Street complex in Melbourne’s city centre. His office was situated on the 5th floor, East Wing. He was a clean, honest, hard working cop.

Det Snr Const Gardiner was tasked with investigating terrorist organisations including the Tamil Tigers, and ethnic-linked crime. He was very knowledgeable about the activities of Yugoslav intelligence (UDBa) on Australian soil and even knew some of the key agents of influence!

As detailed in a previous scoop article: www.scoop.co.nz/stories/HL1003/S00021.htm

Yugoslavia was a multi-ethnic communist federation founded in 1945, modelled on the Soviet Union, and fell apart in 1991 into various independent nation states.

UDBa was so ruthless and efficient it at one time rivalled the old Soviet KGB and Mossad in liquidating opponents. In Munich, West Germany, a whole section of a cemetery was set-aside for Croats assassinated by UDBa.

Communist strongman Marshal Josip Broz Tito ruled Yugoslavia until his death in 1980 and during the height of the Cold War managed a great balancing act between East and West. He was seen as an indirect ally of the West after his infamous split with Soviet dictator Josef Stalin in 1949.

A number of Australian left-wing politicians, including Victorian State MP Joan Coxsedge, began to allege that ASIO was turning a blind eye to extremist Croatian elements, who were secretly training on Australian soil to undertake terrorist attacks on Yugoslav territory or upon Yugoslav diplomatic missions in Australia.

In this atmosphere of terrorism mania during the 1970s Australia’s Croat community were looked upon as the bad guy.

We now know that the alleged Croatian terrorism on Australian soil was the work of UDBa.

Even though he passed himself as a member of PSG, Det Snr Const Gardiner no doubt would have worked side by side with SIG.

I got to know Det Snr Const Gardiner in 1989 as a young cadet reporter working for the Australian Macedonian Weekly newspaper, who was interested in ethnic-related crime. My parents are Macedonian migrants.

He in fact tracked me down. He was a canny operator who would pump you for information and would never reveal anything unless it was in his interest to do so.

When he got wind of me investigating a leading UDBa agent of influence based in Melbourne with links to the Australian Labor Party’s (ALP) Socialist Left faction and the national multicultural broadcaster The Special Broadcasting Service (SBS), he offered some fatherly advice by warning me that the agent of influence was “being protected by people high above.”

But then to my surprise Det Snr Const Gardiner proceeded to reveal to me that the agent of influence had between 1968 and 1979 amassed criminal convictions in the state of Victoria for stolen goods, illegal gaming and financial deception. The last conviction was obtained for passing off a bogus cheque in the name of Red Star Belgrade, an overseas Yugoslav soccer team, at a pub in the Melbourne western suburb of Footscray.

The UDBa agent of influence was permitted to work as a state public servant despite their criminal record. ASIO had sealed their rap sheet from ordinary police access. The inference being that the agent of influence may have been cultivated as a “double agent.” But questions remain as to why an employee police check was never conducted by both the Victorian Public Service or SBS?

In a visit to Skopje, the capital of Macedonia in 1993, a year after it declared independence from Yugoslavia, I met with Mr Aleksandar Dinevski, a former Interior Ministry Officer, who confirmed the above-mentioned individual was an UDBa informer in Australia. The Interior Ministry is responsible for policing and the secret service

Another name supplied by Det Snr Const Gardiner was an individual who was a member of a Balkan mafia group based in Melbourne. In 2002 when I mentioned this name to another Macedonian Interior Ministry Officer, he confirmed that the individual was involved in drugs and illegal weapons.

One of Gardiner’s favourite warnings was” If you write anything about me, I’ll chop you! Wait till I’m long gone.” I kept my end of the bargain for 20 years!

In 1990 he telephoned me out of the blue asking for some information on a stolen weapons racket and if I had heard anything. He said he was deeply concerned about weapons getting into the hands of the wrong people. I told him I knew nothing and asked if he would elaborate.

But being the loyal policeman he did not go into detail. Months later, the story unfolded about a Police operation targeting stolen weapons. One of those unexpectedly caught in the dragnet was Oliver Bubevich (aka as Bubev, Bubevski), also the son of Macedonian migrants, and a Vic Roads (vehicle licensing office) employee and the then owner of a pub (bar) in Fitzroy, a Melbourne’s northern inner suburb. Bubevich was an obsessed illegal gun collector without links to organised crime or Yugoslav intelligence.

According to a Herald Sun newspaper report, dated 22 March 1991, “A MAN who hid a gun in his stove and ammunition in his kitchen cupboards was fined $2500 yesterday for possessing 15 unregistered firearms. Magistrate Mr David McLennan also ordered Oliver Bubevich to perform 300 hours of unpaid community work.

“Melbourne Magistrates’ Court heard on Wednesday that Bubevich was fascinated with guns and had 23 weapons – all with serial numbers drilled out or stamped over. The weapons, hidden throughout his Thomastown house, were found when police raided the property last year. Bubevich, 36, of Winamarra Cres, pleaded guilty to two counts of unlawful possession, one count of possessing silencers and 15 counts of possessing unregistered and unlicensed firearms.

The court was told police raided Bubevich’s house after finding two unregistered handguns in his car and another two unregistered weapons in a second man’s car after Bubevich had sold them to him.

“Bubevich denied supplying guns to the underworld and said his fascination with guns had led him to disregard the fact the serial numbers had been deleted. He told the court he had bought two of the guns from a man at a Fitzroy hotel and had found the rest on the site of a demolished Preston house.

” On 21 March 1991, the Herald Sun wrote: “Prosecutor Sen-Constable Maurice Lynn told the court Bubevich was arrested after police found two guns in his car on November 7, 1990. “They found two more guns, a .38 Rossi revolver and a .32 Webley and Scott pistol in a second man’s car after Bubevich had sold them to him, he said. Sen-Constable Lynn said police then raided Bubevich’s house and found 23 unregistered guns, two silencers and a large quantity of ammunition in kitchen cupboards.

“Bubevich’s lawyer, Mr Peter Finkelstein, said his client was a “gun collector gone wrong”. Magistrate David McLennan said he was not satisfied beyond reasonable doubt that Bubevich had supplied guns to crime figures.” 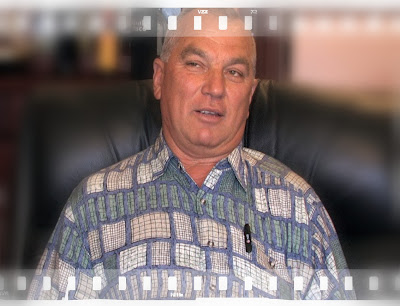 “I met Geoff Gardiner in the early 1980s through my friend Stojan Sarbinov (another long time Macedonian activist). Geoff Gardiner was a member of the Victorian Police anti-terrorism squad.

“I had numerous meetings with Geoff Gardiner as a representative of the Macedonian community (in Melbourne) because in the past we organized a lot of protests…He was assigned to communicate with the ethnic groups.

“As a democratic society here in Australia everybody has the right to express their opinion…but it has to be conducted in a civilized and peaceful manner.”

Mr Talevski said that Gardiner had confirmed to him that a number of individuals who were saboteurs of Macedonian community events were connected to the Yugoslav government.

“These people were well connected and protected by certain forces. He (Gardiner) didn’t go further in saying…” Mr Talevski said.

Police of the calibre of Geoff Gardiner are very rare. It was because of his attention to detail, the willingness to be flexible that the shenanigans perpetrated by UDBa in the state of New South Wales, and aided indirectly by the incompetence of NSW Police Special Branch and ASIO, in the 1970s, such as the Croatian Six case did not happen in the state of Victoria. 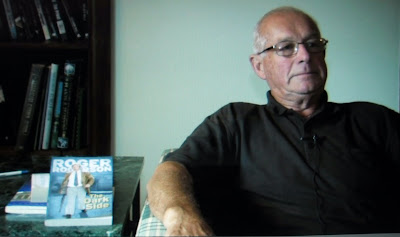 Infamous ex-NSW Police Detective Roger Rogerson, freeze frame image from a video interview with Sasha Uzunov, May 2011. Rogerson was one of the arresting officers in the Croatian Six case. He has called ASIO “amateurs.” Photo by Sasha Uzunov.

Infamous ex-NSW Police Detective Roger Rogerson, now an author, was involved in two of Australia’s highly contentious cases, the Ananda Marga-Hilton Hotel bombing and the the Croatian Six case. In February 1979 Rogerson led the raid on the Sydney home of Mile Nekic, one of the Croatian Six.

Masters filed a story about The Croatian Six case. An agent provocateur set up members of Australia’s Croatian community in 1979. Six Croats were imprisoned on false charges of wanting to plant bombs in Sydney.

Masters tracked down the agent provocateur, Vitomir Visimovic, who was an ethnic Serb living in Bosnia but had passed himself off as a Croat.

In fact, ASIO, the Australian Federal Police (successor of the Commonwealth Police) and the infamous and corrupt New South Wales Police Special Branch were all aware that Visimovic was an UDBa operative but suppressed the information during the trial of the Croatian Six. Moreover, the alarming thing was the Australian authorities let the man depart the country. This was during Malcolm Fraser’s tenure as Prime Minister (1975-83).

In a filmed interview last month, Rogerson revealed to me that ASIO were “amateurs.”

Victoria Police’s motto is Uphold the Right…Tenez Le Droit…It certainly did that back in 1990-91 in keeping our streets safe from weapons falling into the hands of the bad guys. But we should never remain complacent.

If you have any information about UDBa activities on Australian or New Zealand soil, then I would like to hear from you. We can talk on or off camera and confidentiality is assured – Sasha Uzunov. You can contact me on sashauzunov8@gmail.com

The Fight against Yugoslav Intelligence in Australia, parts 1, 2, 3 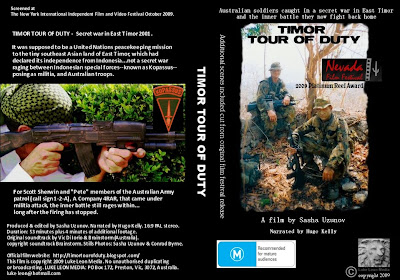